With the Reds and Blues refusing to help them, Epsilon and Carolina journey to the Freelancer Offsite Storage Facility to find the Director themselves. While there the two find F.I.L.S.S., and the latter informs them that the Director had returned to the facility and hasn't left since. Epsilon then orders F.I.L.S.S. to allow them access inside, to which she accepts.

Meanwhile, in Valhalla, the Red and Blue Teams are continuing their war, with the Reds attempting to negotiate with the Blues to get their flag back, as well as other surplus equipment. Simmons decides to trade in the Meta's Brute Shot, which has been kept by Grif, for the flag, though Grif protests stating that he wants to keep the "Grif Shot" for himself. As Washington and Grif argue over the Brute Shot, Doc compliments the teams on how their past adventures have changed them for the better.

For example, Sarge finally got to lead a real military operation, Tucker learned how to use his sword "like a pro", Washington found a new team, Simmons found his old team, Doc himself managed to keep a patient alive for the first time in his career, and Donut didn't die. Doc concludes that everyone got what they wanted, but Caboose denies the claim. Realizing this, the Reds and Blues then decide to go after Carolina and Epsilon. Washington attempts to stop them, saying that they are being too reckless and will face impossible odds.

Sarge points out that despite the fact that the Freelancers had better equipment and training, what they lacked was the Red and Blue team's willingness to trust in each other. He also tells Washington that he should stop being so cautious and be a little reckless for once, which convinces him to join them. Wondering how they will be able to catch up to Carolina and Epsilon, the Reds and Blues suddenly become surrounded by a trio of UNSC Police Hornets arriving to arrest them. However, the Reds and Blues manage to hijack the Hornets and fly off to find their companions.

Back at the Freelancer facility, Epsilon and Carolina overhear the Director listening to an audio recording of Allison. Carolina arms herself with a plasma rifle and a shotgun, and the two find numerous teleporters. They then enter one in order to confront the Director, but end up in a room filled with hostile robots that resemble Tex, where Epsilon then realizes that the Director had never stopped trying to create a perfect copy of her. The robots then activate and prepare to attack the two.

Cut to Carolina over-looking the facility from a ledge. Epsilon appears behind her.

Carolina: Really? You're sure?

Epsilon fades away as Carolina drives her Mongoose through a tunnel. Upon reaching the other end, she dismounts and is called over by Epsilon

Epsilon: It's up here!

Carolina walks over to Epsilon to find F.I.L.S.S

F.I.L.S.S: I am sorry. This is a secure facility. Only authorized personnel may enter.

Carolina: F.I.L.S.S? Is that you? What's happened to you?

F.I.L.S.S: This is a secure facility. Only authorized personnel may enter. Please leave the premisis immediately.

Carolina: F.I.L.S.S, this is Agent Carolina of Project Freelancer. Acknowledge and go for secure.

F.I.L.S.S: I am sorry. I recognize that designation, but only authorized personnel may enter this facility.

F.I.L.S.S: Certainly. Welcome back Director. I did not expect to see you again so soon.

The wall behind them opens to reveal a secret doorway.

Epsilon and F.I.L.S.S: My pleasure.

F.I.L.S.S: Strange. I was...unaware you left, Director. I will have to scan my files and find the error.

Carolina: So you show the Director inside the facility as well as outside?

Carolina: Yes. Strange. And exactly what we were hoping for.

Cut to Valhalla at Blue Base. Wash and Tucker are standing on a ledge watching the Reds from nearby.

Grif: Well this is depressing.

Sarge: Can it, private.

Grif: What? I'm just saying what we're all thinking.

Sarge: You didn't say you were fat and worthless, and we were definitely all thinking that.

Tucker: Alright, you know the drill.

Simmons: Do we have to?

Washington: That depends; how badly do you want your flag back?

Simmons glances at Grif, who is standing behind him.

Simmons: (sighs) I would just like to let everyone know that I suck... and that I'm a girl... and I like ribbons in my hair... and I want to kiss all the boys.

Tucker: You know, it was funny the first few times, but this is starting to get depressing.

Washington: Yeah... (to Red team) Hey, what else have you got?

Cut to a group of the Red team's items stacked up upon each other, just behind Wash and Tucker.

Grif: Nothing! That stupid flag was the only thing we had left!

Simmons: Actually, there is one thing you haven't taken.

Cut to the Meta's Brute shot being placed on the ground outside Red Base. Sarge, Tucker, and Wash are seen standing over it.

Simmons walks up to them.

Simmons: Stolen alien weaponry used by the scariest fucking mute in the galaxy? Yeah. Pretty much.

Sarge: It's like half-knife, half-rifle. What would you call that?

Tucker: I don't know, but we'll take it!

Tucker: Oh please, what were you gonna do? Eat off it?

Grif: Uh, actually dickhead, I asked Donut to mount it for me in the base.

Donut runs out from Red Base.

Donut: And you know I can't resist a good mounting!

Washington: You've been hiding one of the most advanced pieces of technology known to man, so you can hang it in your living room?!

Grif: Well, when you say it like that it sounds dumb.

Washington: That's because it is dumb!!

Doc walks up behind them.

Doc: I think it's kind of cool! I mean, when I met you guys, all you did was stand around and talk. But now you can't walk five feet without getting wrapped up in some crazy adventure.

Doc: I don't know, it's just cool. I mean, come on. You guys have been through a lot together. Don't you want something to remember all the good times?

Tucker: The good times? I was stranded in the desert!

Simmons: We were almost killed!

Sarge: I learned my entire military career was a lie!

Donut: And I got shot!

Doc: Ok yeah, it wasn't perfect, but look what you all got out of it.

Sarge: You mean the rifle-knife?

Grif: You mean the "Grif shot."

Doc: Well, sure there's that, but Sarge, you got to lead an actual military operation. And Tucker, you learned to use your sword like a pro.

Doc: (to Wash) You found a new team. Simmons got back his old team. I managed to keep a patient from dying...

Donut: And in return, I didn't die!

Doc: You see? In the end we all worked together and everyone got what they wanted.

Caboose: (sadly) Not everyone...

The Reds and Blues look at each other in shame. Tucker pulls out his sword and begins walking away.

Washington: (to Tucker) You realize that if you go after them, there's no promise you'll come back. This isn't a game to the Director. He plays for keeps.

Sarge: Oh well, this place was getting kinda stale anyway.

Washington: After everything Church and Carolina said? The-the way they treated you!

Simmons: Hey, we gave you a second chance.

Grif: Besides, if we quit every time Church started shouting, this shit would have been over a long time ago.

Washington: We'll be outgunned, we'll be out... everything! This is stupid. Just think for a minute before you do anything reckless.

Sarge: Son, stupid and reckless is how we always get things done.

Washington: But Sarge, I...

Sarge: You know, there's one thing you Freelancers always seem to forget. And that's the fact that we've managed to kick your ass time and time again. Oh sure, you've got all your smart plans, and your fancy technology, and your advanced training, but, in the end, what has that gotcha? Without a team you can count on and your fellow soldier by your side, all that doesn't really amount to squat, now does it? So instead of standing there bellyaching all day, just tell us, are you gonna keep playing it safe...

Sarge: ...Or do you wanna get a little reckless?

Washington: This has to be the worst idea... ever... but you can count me in.

Doc: I'm in too! Oh man, this is so cool! I love how inclusive you guys have become. I'm going to go pack my medical gear for the trip. WOOHOO WE'RE BACK TOGETHER!!!

Doc happily runs back inside the Red base.

Simmons: Um guys... they have a huge headstart. How are we supposed to reach them in time?

A trio of Hornets suddenly drop down from the sky and surround the group.

UNSC Police: Freeze! This is an ambush! You are under arrest for the theft of UNSC property!

Simmons: What?! We really are wanted criminals of the UNSC?!

UNSC Police: Surrender now! You are outnumbered! Uh, well... technically you're not really outnumbered... I think we have the same number, uh, it's like one-to-one, but we do have airships! Fast, easy-to-fly airships! Which we will now land... in order to take you to jail.

Wash and Sarge turn to each other. They then proceed to raise their weapons at the Hornets. Cut to the Reds and Blues, now in control of the three Hornets, flying away. The three UNSC pilots are seen stranded in front of Red base.

Caboose: Goodbye people we stole these planes from!

Donut: Man! This is awesome! Hey Simmons, who's the blue guy with the yellow accents? His voice sounds familiar...

The Reds and Blues fly out of the canyon on the Hornets. Cut to a shot of the Blue base. Fade to a shot of the Red base. The camera pans up as a bolt of energy launches into the sky. Fade to Carolina turning a corner of a hallway with her gun ready accompanied by Epsilon.

Carolina: Me neither. Where is everyone?

Cut to the Freelancer storage area. Carolina, with Epsilon, walks through the facility as voices are heard through the intercoms.

F.I.L.S.S.: (over intercom) Sir, you really should stop to eat. It has been several days-

Carolina picks up a plasma rifle

Carolina: You're not the only one...

Carolina walks towards the teleporters, Epsilon begins to speak to her

Epsilon: This is it.

Carolina: Ready to meet your maker?

Epsilon: I got your back, Carolina.

Carolina and Epsilon enter one of the teleporters, though stop, surprised by what they see.

Carolina: Church, what is this?

The Director's monitor then notices them.

Epsilon: He kept trying to get her right...

Carolina: You think these things are anything like the real deal?

Cut to a large army of robotic Tex drones who all crunch their knuckles and stretch their necks in unison. Cut to side view of the drones, where one steps forward to the front and stops, punching its fist into its palm and cracking its neck.

Tex Drone: You have no idea what kind of trouble you are in. (slight chuckle) 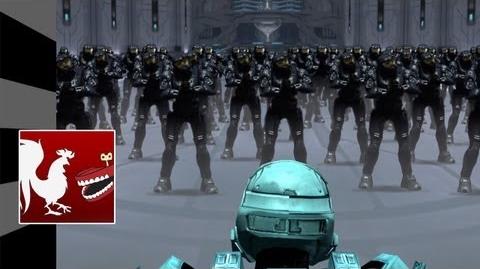 Retrieved from "https://rvb.fandom.com/wiki/Reckless?oldid=146236"
Community content is available under CC-BY-SA unless otherwise noted.