Realignment is the fifth episode of Red vs. Blue: Season 9 and the 178th episode overall.

In Blood Gulch, Church is seen limping back to Blue Base. Caboose is standing at the door and greets Church, but Church expresses his anger at the fact that Caboose and Tucker did not help him with the Reds. As Church continues to quarrel with his teammates, Caboose tells everyone that he called Command, which excites Church, believing it to be Tex. He then gets upset because nobody should arrive until he dies, to which Tucker states that they thought he was dead. Church asks Caboose if he knows who Command is sending, but the latter says no.

Meanwhile, at Red Base, Simmons goes looking for Grif, who stops him. Simmons tells Grif that Sarge wanted Grif to relax, but Grif seems unaware to what the word 'relax' means or how to do it. As Donut comes out crying, Simmons tells him that Sarge needs his help building a robot that Command sent. Donut says he's not feeling up to it and  runs back into his room tracking mud on the floor. Simmons looks at Grif expecting him to freak out but Grif does no such action.

In the past, aboard the Mother of Invention control room, the Director explains to Freelancers South, North, and Carolina about the data chip. He reveals that it contained coordinates to a major target for Project Freelancer, and proceeds to change the leaderboard; placing North in 4th place and South in 5th place. South angrily takes off her helmet and tells the Director she thought the mission was a success. The Director, in return, tells South that because of her lack of stealth, a mission objective, she made their next mission more difficult. He dismisses them and South walks away angrily, punching a door control on her way out. Carolina asks North if she should speak to her, to which North suggests to give her a minute.

Caboose: Church, you're home! Welcome back.

Church: Yeah, yeah, thanks for helping me while the Red's just shoot me in the goddamn foot.

Caboose: Yeah, well you told us to stay on the cliff and I did...Yeah that was helping.

Church: Oh really? Then why aren't you on the cliff right now?

Caboose: Oh I thought the helping part was over.

Tucker emerges at the top of the base

Tucker: You're back already?

Church: What do you mean already? It took me half an hour to limp across this goddamn canyon.

Tucker: Yeah, but we thought they were going to kill you, I expected you back never so in my mind you're early.

Caboose: He is right about the two different times.

Church: You shut up too.

Caboose: "Alright, now the helping part is definitely over!" (Walks into the base)

Church: Damn it. This is exactly what I get for trying to fix things.

Tucker: What are you fixing?

Church: Everything. Us. The Reds. Trying to make things the way they're supposed to be. (groans sharply) My foot!

Tucker: Are you okay?

Tucker: I don't know you're wearing full body armor and bleeding. That means you're either dying or just whining.

Tucker: Do you want me to call Command? Have them send a medic?

Church: No! No medic, I'm not hurt that bad, besides those guys are just...bad luck.

Caboose: (Walks out of Blue Base) I already called Command.

Tucker: Caboose you're not allowed to use the radio.

Caboose: Right. Unless it is an emergency. And then I can use it to call Command. And also 800 numbers I see on TV. Because those are free to call.

Tucker: Damn it Caboose what did you order this time?

Caboose: I promise you will not see anything show up here that I ordered, nothing at all. For at least six to eight weeks.

Church: What the hell is he talking about?

Caboose: Well, you sound upset, you probably want some beef jerky. It'll be ready in six to eight weeks.

Tucker: You ordered a food dehydrator didn't you?

Caboose: Oh, you won't be so mad when we are storing twice as much ammo as we normally can.

Tucker: For the billionth time Caboose you can't dehydrate bullets.

Church: You actually order all those stupid gadgets that you see on TV?

Church: Wait what did you just say?

Caboose: Oh, yes, yes they are sending someone to help us.

Caboose: Yes unless that's bad in which case I don't know what you are talking about.

Church: What? They aren't supposed to send anybody until after I die.

Tucker: We thought you were dead dude, you walked into Red Base.

Church: Caboose, did they say who they were sending?

Caboose: Uh, yes, they definitely did.

Church: Okay, do you remember who they-

Cut to Red Base

Simmons: What, is it danger, the Blues?

Grif: No, you are not walking across my floor with those boots; I just mopped it.

Simmons: Grif, there's no time for this.

Grif: Time for what Simmons, a job well done? There's always time for that, I believe you know my motto.

Simmons: You don't have a motto.

Grif: That's right because there's always something more productive that I could be doing. Who has time to sit around and make up mottos when they could be buffing the floor.

Simmons: Well, I need to get through.

Grif: Sorry you're just going to have to wait five more minutes. It's not that long. Just do what I do, count to three. one hundred times.

Simmons: Why wouldn't I just count to three hundred?

Grif: You're right. I should probably say it a third time just to make sure no one I love dies, turning off light switches, there that feels better.

Simmons: Dude, you have issues.

Grif: I also have a clean floor which you can't walk on.

Simmons: But I need to get-

Grif: -Simmons, you know the rules and what happens when we abandon the rules? Everybody gets germs and dies.

Simmons: Oh, silly me. I forgot the reason I came in here. Sarge wants you to take a break Grif. You're on break right now.

Grif: A break. Um, I'm not familiar with the concept.

Grif: Relax, hm yea right, and how exactly would I go about doing that, is there like a manual I could read or something?

Simmons: Just stop cleaning. Do nothing. What happened to Donut?

Grif: He's in reading that book he always reads.

Grif: Don't know, I don't ask and he doesn't tell. Its got flowers on it.

Grif: And drawings of things like hearts, he likes to read it and cry.

Donut: I'm not really feeling up to it today.

Simmons: That blue guy have you depressed? You're bothered by what he said aren't you?

Simmons: Why did you listen to him? I didn't even know you had feelings Donut.

Simmons: Whatever come help us if you want, up to you.

Donut: Okay, I'll be out in a minute. I wanna get my head together. I need to clean my weapon. Maybe light a few candles.

Donut: Un, not everything is about function Simmons.

Simmons: What did I say!

Grif: Uh, what? Sorry I wasn't listening, I was kinda doing nothing.

Simmons: Looks like Donut got tracks all over your shiny floor Grif.

Grif: Oh well, I'm on break anyway right? Why should I give a fuck?" (Small tremor happens) "Whoa, that felt really really good to say that.

Simmons: What is wrong with everyone. Man, I hate when things change.

As Simmons' last words echo, the scene cuts to the UNSC Mother of Invention flying through space as the camera pans into the control room

Director: The data you recovered has pinpointed the location of a very important target for Project Freelancer. Excellent work.

Director: Counselor, please update the board.

Director: That is all. Dismissed.

South, in shock, rips off her helmet

South Dakota: I thought you said the mission was a success, Sir?

Director: One of the mission objectives was stealth. Your carelessness revealed our intention and made our next mission more difficult. They'll be ready for us. Dismissed.

South angrily walks to the door

Carolina: (to North) Think I should talk to her?

South punches the door control panel, causing it to break and fall off the wall after walking out of the room

North: Maybe we give her a minute. 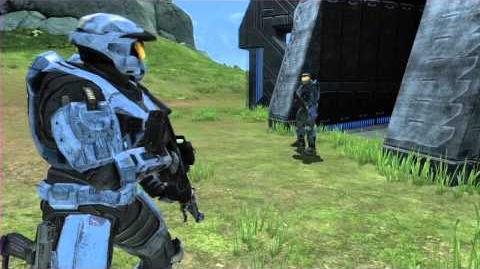 Retrieved from "https://rvb.fandom.com/wiki/Realignment?oldid=135923"
Community content is available under CC-BY-SA unless otherwise noted.