Rally Cap is the eighteenth chapter of Red vs. Blue: Revelation and the 171st episode overall.

F.I.L.S.S.'s alarms tell Caboose that Church is injured and needs urgent help via his recovery beacon. Caboose runs off to find the rest of the teams.

At the Freelancer base, Doc, Washington and the Meta notice Church's body from a distance. However, Wash orders them to stop as he knows that the assailant could have placed Church there to draw them in and then snipe them. Doc points out that if the assassin was a Freelancer surely he/she would know they would figure all this out. Wash tells him he is over-complicating the matter but a radius of mines activate around their warthog and blow them up.

Back at the Freelancer Offsite Storage Facility, Caboose asks the others for help but they all refuse apart from Sarge. When questioned, Sarge tells them that he wants to show Project Freelancer that he is a real soldier, and that no one else has to go with him, much to Grif's surprise. After asking the Reds and Blues "do ya ever wonder why we're here?", Sarge reminds each of them through a passionate speech that Grif could have quit the Reds whenever wanted to, Simmons could have been promoted if he'd asked, Tucker is actually a good soldier, it's nice to have Caboose around, and that they all stayed with their respective teams because deep down they wanted to. This persuades them all to go help Church and Tex, but Simmons tells them they'll need a vehicle faster than a jeep to get there in time. When Grif asks who is going to drive the vehicle the others turn their attention towards him.

Fade inside a room where Caboose is seen standing in front of F.I.L.S.S.

Caboose rushes out of the room. Cut to Doc driving Wash and the Meta across a snowy field, perfectly serene except for Church's apparently lifeless body.

Washington: There he is. Something doesn't seem right here. Stop the car.

Washington: I don't like this. How did he get hurt, why isn't anyone helping him?

Washington: You're right, this is a trap. Those walls there, perfect for a sniper. We walk in to where he's hurt and suddenly, we're boxed in, nowhere to go.

Doc: You think the Reds are tryin' to ambush us?

Washington: The Reds? Hahaha! No. This is an actual military tactic. We drilled it all the time in training. No, whoever set this up is a Freelancer.

Doc: Yeah, but if a Freelancer set this up, wouldn't they know that you guys were Freelancers, and that you would recognize this as soon as you saw it?

Washington: What? No, you're overthinking it. That's just-

10 landmines begin to light up in a perfect circle around them.

Washington: Oh, son of a bitch.

The Warthog explodes. Cut to Caboose approaching the Reds; undoubtedly to tell them his complete misunderstanding of what's going on

Sarge: What do you want, Blue?

Caboose: I need your help.

Caboose: Yes, Church is hurt, they must have gotten to him and Tex.

Grif: They got Tex? Good, that just means she won't be able to beat the hell out of us any more.

Caboose: No we have to rescue them.

Grif: Rescue them, are you nuts? No one told them to leave, they're on their own.

Grif: Uh hey dude, I don't know if you've picked up on this yet, but if you wanna convince Sarge to do anything, I don't think the best argument is "The Blues might die if we don't."

Sarge: Cowboy up Caboose, I'm comin' with you.

Sarge: I said I'm helping him.

Grif: Who, the blue guy? Why on Earth would you ever help a Blue for no reason?

Simmons: About as well as you would expect.

Grif: Well I'm not going, and you can't make me. You quit, remember? I don't take orders from you any more, and besides, this whole command structure thing was bullshit anyway. We all know that now.

Sarge: Nope. I'm goin'. That's it. You wanna come, come on. But I don't expect you to. Simmons will probably tell you that statistically, some of us will probably die.

Simmons: All of us.

Sarge: All of us will probably die. But that's not what's important. Let me ask you two a question: You ever wonder why we're here?

Grif: Um, it does seem to be one of life's great mysteries.

Sarge: No, I mean you! What are you doing here? You always act like you wanna quit, but hell, you could've left whenever you wanted. No one would have stopped ya. So why are you here? And you, Simmons.

Sarge: You say you wanna be in charge. They would have given you your own squad a dozen times over. You know it, and I know it. But you're still, here. And you Tucker. As much as I hate to admit it, you're actually good at being a soldier.

Sarge: I know you like to make your rude comments, pretend like it all doesn't matter. But an entire alien race chose you to be their hero! So why are you here? And Caboose... Uuhhh, it's good to see you.

Caboose: Thanks. I'm really enjoying the speech so far.

Sarge: Maybe you're all here because this is the only place you fit in. Maybe you're here because you don't have anywhere else to go. Maybe you're all here, because deep down, you want to be here. The reason doesn't matter. What matters is that you're here! For all we know, Tex and Church are dead. That means we're the only ones who know what's happened; the only ones who can prevent them from covering it up. So the way I figure it, these Freelancer guys, wanna use us, take us away from our families, and send us all over the dag gum galaxy just to test if their agents are ready for the big fight? Well, I guess I'm interested in showing 'em, exactly what a big fight is all about. Time to clean the slate. So I'm not ordering you to go. I ain't even askin'. You do, what you gotta do Private Grif.

Simmons: I don't think a jeep will get us there soon enough. But I think I know what we can use.

They all file into a room

Grif: Who the hell is gonna drive that?

Everyone stares at Grif.

Grif: Why is everyone looking at me? 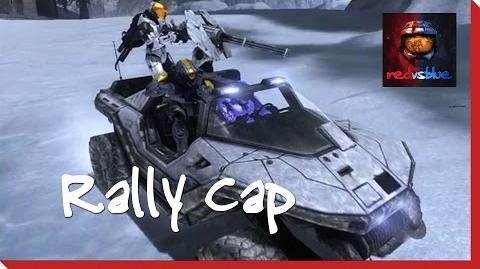 Retrieved from "https://rvb.fandom.com/wiki/Rally_Cap?oldid=142634"
Community content is available under CC-BY-SA unless otherwise noted.