A group of soldiers who look exactly like members of the Reds and Blues perpetrates a terrorist attack at a UNSC secure supply depot on Earth, ruthlessly murdering the entire staff and leaving no witnesses. They leave the scene with their alleged leader, a soldier in cobalt armor carrying a sniper rifle, who leaves his helmet behind at the scene after getting blood on it.

Later on, Reporter Dylan Andrews from Interstellar Daily sneaks into the area with her cameraman Frank and determines, before getting caught, that the attack was executed by the Reds and Blues, who went missing ten months after the Chorus incident and have since been blamed for several similar attacks. Since Chorus' rediscovery, the planet has tried to remain independent from the rest of the galaxy. The attacks, seen as the Reds and Blues siding with Chorus, are complicating matters and leading the UNSC to consider military action.

Andrews's boss Carlos Trabka scolds her for chasing the Reds and Blues' story and, in turn, getting herself caught in legal situations that are expensive for the station. Dylan does not want to leave the story be: she was the reporter who profiled the Reds and Blues after Project Freelancer and knows them enough to know something is up. She requests for two weeks to follow up on the story, but Carlos only gives her one, as well as demanding daily dispatches so he can stay up to date on her story.

With permission granted to continue the story, Dylan decides to first go to the same place where Agent Washington went when he tracked down the Reds and Blues: Blood Gulch.

We open up on a shot of a frog egg timer. A blue hand reaches out and sets it as it begins to tick. We cut to a wider shot of the soldier, who is revealed to be LOCO, as he makes a run for it. The camera pans to the right, revealing BUCKEY and SURGE hiding behind a wall.

The camera continues to pan, revealing CO MCCREADY and another soldier, the unnamed BOTANIST are walking by, the CO giving a lecture as they walk up some stairs.

CO McCready: Every action has an equal and opposite reaction! That's Fig Newton bunny!

They continue walking through the complex.

McCready: Rule Number 2: Every other person in this miserable place is literal garbage. Don't talk to them, don't listen to them, don't become cute friends with them!

McCready: Rule Number 3: Keep your radio on at all times!

VARGAS comes running up some stairs to meet them.

Vargas: Something tripped the motion sensor, one floor down. Command wants you to take a look.

McCready: Fucking Command...do I look like a goddamn exterminator? Vargas, show this bunny around.

MCCREADY runs off. VARGAS turns to the BOTANIST.

Vargas: All bite, no bark. So, first deployment?

VARGAS and CASIO 06 walk down some stairs. LOCO, who is waiting behind a wall at the bottom, walks backwards around a corner to hide.

Vargas: Well, if you signed up looking for action, you won't be finding it here. We're a long way from Chorus.

Vargas: Ain't that the whole deal?

SURGE and BUCKEY go running behind the two, unseen.

Casio 06: Tuition! When I get out I'll have a full ride to the college of my choice. I'm going to be a botanist.

Vargas: Botanist, huh? Well, I've never much trusted robots myself, but that's just because I grew up in the South. Out here, your main enemy is boredom...boredom and a CO who really loves putting dogshit in pillow cases.

Botanist: Oh, I anticipated the boredom. That's why I brought along some books on tape.

Vargas: Books on tape? What's the appeal of that? Don't the pages get stuck together?

Cut to a shot of the egg timer, which goes off. We do not hear it, but an explosion engulfs the screen. In successive shots, we see several soldiers, including VARGAS, the CASIO 06, and MCCREADY caught in flames, before finally hearing the explosions we cut to a wide shot of the building, the flames bursting out into the air.

We cut to a shot of LORENZO and LOCO, standing amidst the smoke and flames. They look up to see a AV-49 Wasp destroyed by a larger Pelican, which then flies over BUCKEY stabbing a soldier to death as CRONUT watches on.

The group then meet with the Pelican and watch as the gangplank comes down, revealing their leader TEMPLE, a soldier in blue cobalt armor carrying a sniper rifle, who slowly walks down. TEMPLE's attention is drawn to VARGAS, who gets up from the ground and stares at the group in disbelief.

VARGAS pulls out a knife. SURGE pulls up his railgun and charges it as VARGAS runs towards TEMPLE, firing it just as he reaches him.

TEMPLE's helmet is splattered with blood. Wiping some of it off, he then removes his helmet in front of the Blues and Reds, and throws it off. It lands upright on the ground as the words appear on the screen.

A news report starts playing, and we cut to shot of the building from another rooftop.

Voice: A capital in chaos.

The reporter, DYLAN ANDREWS, walks onto the screen, gesturing towards the building. She is being filmed by her cameraman, FRANK.

Dylan: As you can see behind me, UNSC police are swarming the scene of a brazen late night heist. We're told the attack has taken the lives of a dozen UNSC guards, with untold millions in industrial goods stolen. The UNSC has not identified suspects. However, the limited surveillance footage obtained by this reporter confirms an ugly surprise. The Reds and Blues have struck again...and, cut.

Frank: Got it. Is that a wrap?

Dylan: Let's pack it up. I want to get inside for the next pickup.

Cut to inside of the building, where flames and smoke still linger. DYLAN and FRANK approach a checkpoint, which is guarded.

Frank: They're going to shoot us.

Dylan: They're not going to shoot us. Follow my lead and when in doubt use a confusing acronym. Military types love acronyms.

Guard: Stop right there, please! Gonna have to ask you to turn around and go back from where you came! This is a restricted military AO.

Guard: (suspicious) Uh, stand by. I'm going to have to run this up the chain!

Dylan: (still in-character, taking a more urgent tone) No time! We have a live LOLRPG upstairs with a BPRD of over 5000!

Dylan: (even more urgent) We're expecting an LSAT RTAA in the next 8 minutes!

Dylan: (grave) It's a Class 1 FUBARFOSHO.

Beat. The GUARD turns to FRANK.

Guard: He doesn't say a whole lot, does he?

Dylan: He's a French Analysis Repair Transfer. No English, but he's the best LCARSDDR in the entire AOL. Ain't that right DuCroix?

The checkpoint opens. DYLAN and FRANK go through.

Jump to DYLAN doing another part of her report, standing on some charred ground.

Dylan: With no clear motive established, many experts have concluded the Reds and Blues attacking the UNSC on behalf of a free Chorus. Since its rediscovery, the small colony has insisted on remaining independent from the rest of the galaxy. A demand that does not sit well with the members of the UNSC. These recent attacks have only complicated the negotiation process, and the UNSC has threatened extreme measures if the attacks do not stop immediately. Public opinion has shown increasing support for military intervention. Which brings––

An INVESTIGATOR appears in the background.

Investigator: Hey! Who the hell are you two?!

Dylan: (in character) We're documenting. We're with UNSC Intelligence. Who are you?

Investigator: (suspicious) Intelligence, huh? We'll see about that. Stay where you are!

The INVESTIGATOR runs off. DYLAN quickly runs in the opposite direction.

We cut to a shot of DYLAN crouched down and inspecting the blood-spattered helmet, while FRANK stands nearby, nervous.

Frank: We need to leave. They're gonna lock us up and throw away the––

Dylan: (interrupting) Can it! Are you rolling?

FRANK'S camera starts up. DYLAN wraps up her report in front of the bloody helmet.

Dylan: Which brings us to the events of last night. The Reds and Blues invaded the Secure Supply Depot, leaving no survivors to tell their tale. They took whatever they came for and left behind a grotesque symbol of their butchery. No answers will be found here tonight. Only more questions. What are they up to? And what is their endgame?

As she finishes, they are interrupted by a group of soldiers, including the GUARD and the INVESTIGATOR from before.

Guard: You are under arrest!

We cut to a shot from above Earth as a ship flies out into space.

We cut to inside the ship, where DYLAN is on a conference call with the voice.

Dylan: Maybe next time I'll sell the story to ZZN. You know their offer was open-ended.

Voice: Oh, just do it already! For what I'm paying you, I could float a new department and give myself a big boy raise.

Dylan: (smug) Oh, and don't forget: you'll also have a lot more room in your office without my awards cluttering the place.

We see that DYLAN is looking at a screen that is displaying her previous story on the Reds and Blues, "COLORFUL SPACE MARINES FIGHT CORRUPTION."

Voice: (sarcastic) OOOHHH, excuse me! I forgot who I was talking to: God's Gift to Journalism. Can we start over? I bend down and kiss your boots, how's that?

Dylan: We can start over: you can agree to cover the follow-up.

We zoom in on another one of her screens, where we see a Quantum EP Sliplink of the voice, which belongs to her boss CARLOS TRABKA, who has the nickname "Grumpy McBossypants" under his name.

Carlos: You're going to bankrupt the station, Dylan! I'm gonna to lose my job. How am I going to support my ex-wives without my johohohohob...?!

Dylan: There's a story here, and I want to be the one to chase it down.

Carlos: You're takin' swats at windmills, Andrews! The Reds and Blues are old news anyway. People are bored of them. Why don't you do a story about those monster-fighting sexy teenagers? Yeah! My kids love those nudnicks.

Dylan: (annoyed) How can you say the Reds and Blues are boring? After what they did on Chorus?

Carlos: Please, that was ages ago!

Carlos: Frickin' lifetime ago: we live in a 24-hour news cycle, Andrews. Ten months ago, every journalist, talk show host, and shitty internet blogger would've sold a kidney to interview those guys. But they disappeared. Now, they're just everyday criminals. Face facts. These characters don't have the depth you think they do.

Another one of Dylan's screens is showing pictures of each of the Reds and Blues, as well as their names.

Dylan: I profiled the Reds and Blues after Project Freelancer. I know them. This change in their design must be motivated by something big.

Carlos: Oh, you're such a pain in my cojones. Every time you start on one of these damn crusades, I start pissing kidney stones like hail! IT'S LIKE A TOMMYGUN DOWN THERE! (vaguely gun-like) BDLBDLBDLBDLBEE!

Dylan: ...you'll give me enough to hang myself with. Thanks a million, honeybucket.

Carlos: AND... I want daily dispatches. I wanna know every step you take and how much shit gets stuck on your shoes and in-between your teeth.

Carlos: So, where to first, Quixote?

Dylan: I'll start where Agent Washington did when he tracked down the Reds and Blues.

We cut to a shot of Blood Gulch.

Dylan: (cont'd, voiceover) At the beginning. 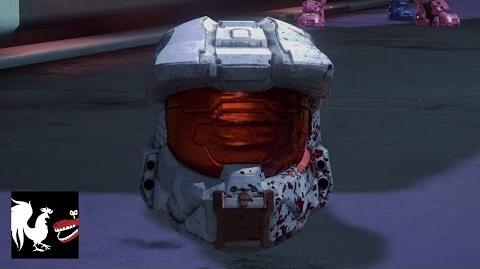 Retrieved from "https://rvb.fandom.com/wiki/Prologue_(Season_15)?oldid=146268"
Community content is available under CC-BY-SA unless otherwise noted.