Previous Commitments is the seventh episode of the fourth season and the sixty-fourth of The Blood Gulch Chronicles.

At Zanzibar, Tex and Church argue over whether to let Andy translate what the Alien is saying. Church is concerned that Andy's lack of manners could upset the alien even further. Eventually, Church relents and agrees to this arrangement out of his curiosity as to what could happen. During this whole conversation the Alien is still beating Tucker to a pulp.

At Blood Gulch, the Reds are fracturing even more as Donut is unsuccessful in asking Grif to return to their base. Grif refuses, believing Sarge simply wants him to do work, and not just eat ice cream. In reality, Sarge did want Grif to help him eat some of the ice cream that he found. Simmons — now painted mostly blue — plays out his vengeance on the Reds. At first he attempts to cause the Reds to be jealous of him; he soon gives up and orders Sheila to open fire on Red Base.

At Zanzibar, with Andy acting as a translator, the Alien reveals that he came to retrieve the energy sword that Tucker found. It was part of a sacred quest that he was on, but the sword has now locked itself to Tucker as he was the first to find and use it; this explains why Tex was unable to use the sword. As a result, Tucker must join the Alien on his quest. If Tucker refuses, the alien will destroy the base and slaughter everyone in it.

Fade in to the Blues... more or less

Church: You have got to be kidding me. There is no way I'm gonna let this happen.

Church: Listen I don't doubt, that he can do it. I doubt that I want him to do it.

Church: Well you know what Andy? You're not exactly the most diplomatic of individuals.

Andy: That's bullshit! You're only saying that 'cause you're a racist.

Church: Racist- bombs are not a race!

Church: We finally make contact with an alien being, and our first attempt at communication is gonna be through a bomb? Am I the only person who has a problem with this?

Andy: Well unless you've got your English to Blarg-blarg dictionary, I don't think you got a choice, now do ya.

Caboose: I had one of those, but I threw it out. It didn't have many pictures.

Tex: I'm sure this'll be fine.

Church: You know I feel that I'm gonna regret this, but I feel even more that I just don't care, and that watching this whole thing unravel might be kinda interesting. Go for it.

Cut to Donut riding around in the purple thing

Donut: There you are, where've you been?

Grif: I think you need to learn what "all over" means.

Donut: Anyway, Sarge wants you to come back to the base, and-

Donut: No? But I didn't tell you what he wants.

Grif: Donut, it's Sarge. I know he doesn't want me to come in to the base to help him eat ice cream, he wants me to do stuff. Work stuff.

Grif: Listen Donut, I know you're ridin' high on your new promotion right now, but don't think you can order me around. Me and Simmons we had a system. He didn't try to tell me what to do, and I didn't ignore him.

Donut: Wait, you ignored him all the time.

Cut to Simmons painted blue on top of the cliff, spying on Grif and Donut through the sniper rifle

Simmons: Look at those jerks. They don't know how good they have it. Alright Sheila, remember the plan. We don't wanna hurt them, I just wanna make them totally jealous for kicking me out. How does my armor look, am I all blue?

Simmons: Okay, let's start Operation Blue with Envy. You know 'cause normally it's green, but I'm gon- I'm blue, but it doesn't make any sense to say y- you know. Attack! (loudly so Grif can hear) Hey Sheila, you know what's great? Being on Blue team, it's so awesome. Way more awesome than being on that ol' Red team. Anyone can be on Red team where you have to share a base, on Blue team, I get my own base.

Grif: Is that Simmons? Hey Simmons, why are you painted blue!? Have you finally lost it!?

Simmons: This isn't working, they don't care. Sheila just shoot at them.

Cut to Donut and Sarge

Donut: I did my best Sarge, but Grif said he wouldn't come help.

Sarge: Son of a Ben 'n' Jerry, who's gonna help me eat all this ice cream we found?

Sheila's first shot hits the side of Red Base

Cut back to the Blues... except for Simmons

Caboose: That's what he said? That's a weird thing to say. Uh, tell him I said okay, I will not ask any, more of uh... that and also, no.

Church: I think I need a translator just for Caboose.

Church: Oh rea- yea- no kidding. Tex, are we paying for this service?

Tex: Just give him a chance.

Andy: He says he came to claim some type of thing, and that the teal one took the thing...

Andy: And that now the thing is gone.

Tucker: Who's the teal one?

Tex: You are, idiot.

Church: That thing that he's talkin' about must be that sword, and it's not broken it's right there.

Andy: He says it only works with the hero who passes the trial of the windmill, and retrieves it from his resting place. For everyone else, it might as well be broken.

Tucker: Trial? Please, I fell in a hole, that's not a trial. I'm startin' to like this culture though, any dude who trips is a hero. I'm pretty sure that makes Caboose God.

Tex: No he's right. It didn't work for me, remember?

Church: Of course it didn't work for you, you're a girl. Means you can't even work the entertainment center back at the base. Doesn't mean the remote control is mythically attached to us.

Tex: Alright then you little smartass, you pick it up and try it.

Church looks at the sword, then at the alien.

Church: Nah, I'll take his word for it.

Andy: And now you gotta go with him, to fulfill the prophecy.

Andy: Heh heh heh, good one. Uh oh yeah, he... he's not too thrilled about it either.

Tucker: See I knew this was a bad idea. Sorry to fuck up your quest, dude, but I'm not goin'.

Andy: Aaand if you don't go, he'll destroy the base, and kill everybody here.

Andy: Aheh, I think he should stay here, 'cause, I like that killin' everybody option. 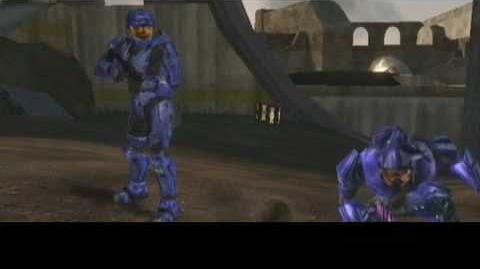 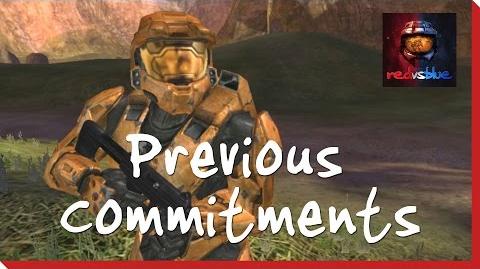 Previous Commitments - Episode 64 - Red vs. Blue Season 4
Remastered
Add a photo to this gallery
Retrieved from "https://rvb.fandom.com/wiki/Previous_Commitments?oldid=135650"
Community content is available under CC-BY-SA unless otherwise noted.