Points of Origin is the seventeenth episode of The Blood Gulch Chronicles.

At Blue Base, Tex and Church discuss matters pertaining to each other's past "favors" while Tucker and Caboose listen. Tex tells Church that her business with him is done. Church asks how so, reminding her that he had saved her from the Red Team when she was captured. Tex explains that she allowed him to live back on Sidewinder while everyone else was slaughtered. Church, however, does not see the logic behind her reasoning. Tex sarcastically tells Church that she can kill him now instead, but Church mocks her, saying that he is already "dead".

Caboose intervenes, telling both Church and Tex to stop fighting, and asks what Blue Team gets in return from rescuing her. Church agrees, but Tex adds that she completed her main objective by retrieving their flag back. Tucker joins in, saying she only did so because it was her job, and that rescuing her was a favor from them. Tex concedes his point, offering her services for as long as need be until Blue Team wins. She then asks what they need her to do, which Tucker has no idea. He then suggests repairing the tank if she knew how to. Tex agrees, prompting Caboose to be joyful of Sheilas return.

Meanwhile, at Red Base, Lopez is shown speaking in Spanish seemingly to himself while Grif, Simmons, and Donut watch. Grif comments on how Lopez never shuts up, while noting Lopez's previous silent character. Grif asks Simmons if he could understand Lopez at all, to which Simmons asks why would he. Grif asks because of Simmons suspected Latin-ethnicity. Simmons annoyingly responds by saying he's of Dutch-Irish decent, and not Spanish. After a slight pause Donut tries to join the conversation, but receives a stark rebuttal from both Grif and Simmons.

The Blues arrive at the damaged tank in the middle of the canyon, and Tex begins her repairs. Church informs them that the Red Team have already repaired their jeep, and cautions them to not be seen as they repair their own vehicle. Church tells Caboose that he is heading up on the nearby cliff in order to provide a better lookout against the Reds (due to his transparent "body", providing very low visibility from a distance).

Caboose asks if he could come with him, but Church responds by saying it would defeat the purpose if he were to be spotted with him. Caboose persists, leading Church to wonder if Caboose even knows what the word 'visibility' means. Church is then told by Tucker to leave, leaving Caboose behind. Tucker walks over to Tex and comments how less-mean she is now that she is helping them. Tex responds, saying she is only hired to do mean things and expresses her joy in it. Tucker tests her, asking if she would kill Caboose if he would pay her. Tex jokingly asks if the question was hypothetical or not and if they should start discussing the boundaries of payment. Tucker closes their conversation, telling her he does not want to talk about it anymore.

Church, from atop the cliff, yells over to Tucker and annoyingly asks why they never buried his dead body back when he had died. Tucker answers by saying how would they, seeing as they only have weapons instead of shovels. Church then asks why they didn't ship his body back home instead, wanting his love ones to pay respect. Tucker looks at Tex and tells Church that Tex, being his former girlfriend, is here to do that. He then asks if Tex had anything to say, but Tex ignores him.

Tex, together with Church, Tucker, and Caboose, is standing outside Blue Base.

Tex: As far as I'm concerned, I'm square with you.

Church: I saved you from a life of imprisonment. How the hell are you square with me?

Tex: Because I didn't kill you back at Sidewinder.

Caboose and Tucker turn back to Church.

Church: You know, I don't really see how not killing somebody is the same thing as doing them a favor.

Caboose and Tucker turn to Tex.

Tex: Well, if you don't appreciate it, I could just kill you right now.

Church: No, you can't! I'm already dead, bitch! I guess the joke's on you!

Caboose: Stop it! Stop fighting. Can't you see that you're tearing us apart? WHAT ABOUT US?

Tex: What about you?

Caboose: We helped you too. And what do we get? Nothing!

Church: Yeah, but nothin'. He's got a point.

Tex: I did help them get the flag back.

Tucker: Yeah, but you were paid to do that. We rescued you as a favor. We could have just let you rot in the Red Army prison, it wouldn't have made any difference to us.

Tex: Fine, I'll stay here as long as it takes to help you guys win this thing. As soon as I have, I'm outta here. What do you need me to do?

Tucker: I have no idea. If you knew how to fix a tank, I would have you do that.

Caboose: Wait, you-you know how to fix Sheila? ...I love you.

Lopez: Entonces le decía "tu no pesas más, yo peso más." Entonces pusimos nuestros cuerpos sobre la escala y determinamos quién tenía el peso más grande. Después de eso me llamé a mi mismo Lopez La Pesado.[Then I would say "you don't weigh more, I weigh more." So we put our bodies on the scale and determined who had the greatest weight. After that I called myself Lopez the Heavy.]

Grif: Man. First he doesn't talk at all, and now we can't get him to shut up. What's he saying?

Simmons: What're you asking me for?

Grif: Well, you know, because you're of, uh, a Latino persuasion.

Grif: But I thought-

Grif and Simmons: Nobody cares!

Cut to Tucker and Caboose sneaking up behind Sheila.

Church: Okay, take it easy guys. When I was over at the Red Base, I saw that they've already got their jeep fixed. So whatever you do, don't let 'em see us before we get Sheila back online.

Caboose: Okay, okay. Even if we get Sheila fixed, how are we going to turn her over? I mean it's not as if we could just lift-

In the background, Tex flips Sheila back over.

Caboose: Oh. She is a very strong lady.

Church: I'm the one that's the least visible, so I'm gonna head up here to higher ground. I'll keep an eye on the Red Base. If I see anything, I'll let you know.

Caboose: Great, I'll come with you!

Church: Do you even understand what the term "visibility" means?

Church: Seriously. You don't know what it means, do you?

Church: Caboose, just stay here, man, and try not to swallow your tongue or anything like that.

Tucker: Just watch the Red Base, and tell us if you see any movement.

Tucker runs up to Tex who is welding on the tank.

Tucker: So, I suppose if you're helping us, you're not as mean as I thought.

Tex: (stops to face Tucker) I wouldn't say I'm mean, I just get hired to do mean things.

Tex: Well, I think it's important to enjoy what you do.

Tucker: So let's say I payed you to kill Caboose. (looks at Caboose) You would still do it, right? Even though you're supposed to be helping us?

Tex: Is this a hypothetical discussion, or should we start talking numbers?

Tucker: Yeah, I don't wanna talk about this any more.

Church is up on the ledge where he was killed.

Church: What the hell is my body still doing up here?

Tucker: That's part of being dead, Church. Your body doesn't really move around much any more. Maybe you haven't fully grasped the concept yet.

Church: Alright, well let me rephrase that then: Why in the hell haven't you buried my body yet?

Tucker: Buried? With what? All we have are pistols and rifles. What do you want me to do, shoot you a grave?

Church: Well then how about shipping me back home? You know, let the loved ones pay a little respect.

Tucker: Well Church, here's your girlfriend. Tex, as one of Church's loved ones, would you like to pay your respects?

Tex turns around and starts working on the tank again.

Tucker: That was a stirring eulogy. Rest in peace, good buddy! 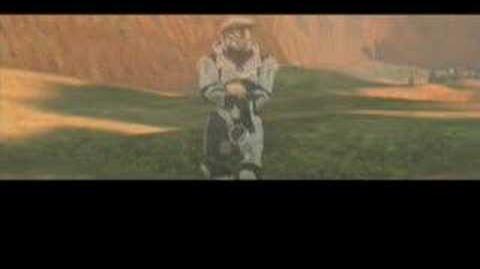 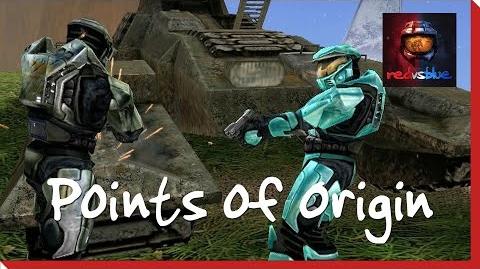