Washington meets up with Carolina at Zanzibar's beach, and reports that he has found nothing that they haven't known about before. Left with nothing, Carolina decides the next step in their journey: to find C.T..

Years ago at the Longshore Shipyards, Wyoming spies on the Insurrection with Florida and sees that C.T. is indeed affiliated with them. During this time, the Chairman introduces himself to the Director as the new chairman for the Oversight Sub-Committee and questions him on the disappearance of an asset. On the Mother of Invention, the Counselor and the Director discuss the newest fragment that has been produced and the Director orders the Counselor to match it with a proper Freelancer. The Counselor says that the fracture is ahead of schedule, but the Director insists that he finds a match for the new A.I. Carolina arrives and reports that C.T. is indeed with the Insurrectionists. The Director shows that since C.T. was not the best agent on the project, it will be a minor loss, and orders Carolina to make sure C.T.'s armor does not fall into the wrong hands. Carolina asks if any other forces would come, but the Director yells at her to dismiss the thought, as Carolina gives a saddened look at Tex's status as number one on the leaderboard before leaving.

Back in the present, Tucker asks how Epsilon knows Carolina. Epsilon says that Tex would tell him stories about her, but Tucker corrects him that she told Alpha. More questions are raised as Tucker asks him how many people is he and insults them. Epsilon sarcastically replies that the other fragments within him think alike. Caboose references his poor thinking skills and reveals that he wrote his name in his helmet in order to remember his name, and that it was hard and rendered him to unable to pronounce a certain word.

Meanwhile, at the Project Freelancer mess hall, Theta shows a trick to North where he produces holographic fireworks as South scoffs in anger. York arrives with Delta and asks North if he can speak to him privately. North and York then tell their respective A.I. to shut off. York asks North about the Alpha and if Theta has ever seemed to think about it. North answers that Theta appeared to be obsessed with it. Washington, next to them eats with his helmet on and asks what is an Alpha. York explains that as the A.I. call each other brothers and sisters, Alpha is basically the father, and says that while the A.I. are fragments, he begins to wonder how Alpha is producing them if the Director is not copying him. North suggests that Alpha merely creates them "or something." York says that it's the "or something" part that bothers him.

Fade in to the beach of Zanzibar. Washington sees Carolina kneeling down by the water and walks towards her.

Washington: The facility is clear.

Washington: Nothing we didn't already know.

Carolina: Figured as much. This place was a dead end.

Carolina: The structure we're going to next, you're positive our target was there?

Washington: I know what I saw, that's why it's on our list.

Carolina: But I know what I saw, and it doesn't make any sense.

Washington: All the more reason to investigate.

Camera pans towards the sky before fading into a new location

LONGSHORE SHIPYARDS (FOB), MANY YEARS AGO...

The camera follows a seagull as it lands on a submerged helmet before being sniped. As the assasistant to the Oversight Sub-committee's following voice-over plays, Wyoming surfaces and, along with Florida, are seen spying on the Insurrectionists at the shipyard

Malcom Hargrove: (voice over) To the Director of Project Freelancer, Dr. Leonard Church. Dear Director, allow me to introduce myself. I am a representative of the newly formed U.N.S.C. Oversight Sub-Committee. Our organization is charged with the protection of high-level assets of the military, one of which, recently went missing. These assets are entrusted to our programs as a privilege, not as a right. As such, they will be safeguarded with the upmost care. In these dark times, mankind has the opportunity not only to prove his humanity, but to earn it.

A Falcon flies by

Wyoming: Well, third craft this afternoon. Let's see who else is arriving.

Malcom Hargrove: (voice over) I look forward to a long, and mutually beneficial, relationship for our two departments. Yours truly, Malcom Hargrove, Assistant to the Oversight Sub-Committee Chairperson.

C.T. and the Insurrectionist Leader disembark from the Falcon

Girlie: I can't believe he trusts that bitch after what she did to us.

Wyoming: There she is. (as Wyoming looks through the scope of his rifle, C.T. gazes out in his direction) Come in, Command. Tell the Director she's here.

Cut to the Leader and C.T.

Insurrectionist Leader: What is it?

The two continue walking, but not before the Leader glances back out torward the ocean. Fade to the Mother of Invention flying through space before cutting to the Director and Counselor inside

Director: Another fragment was harvested this morning, Counselor. Find it a match.

Counselor: This morning? That is ahead of schedule.

Director: Our time grows short, find it a match.

Director: You know what to do. I do not need to remind you how valuable our technology is, Carolina.

Carolina: She doesn't have an A.I., sir. And she wasn't exactly the best agent.

Director: C.T. will be an acceptable loss. But her armor must not fall into the wrong hands.

Carolina: I understand. Will we be the only forces sent out on this mission, sir?

Director: (Leaning forward on the table) Leave personnel decisions to me, agent. Just do your job! It's time to cut the head off the enemy once and for all!

Carolina glances up at Tex's name on the leaderboard before leaving. Cut to Tucker, Caboose, and Epsilon outside the Wind Power Facility

Tucker: So, how do you even know this Carolina chick?

Epsilon: Oh yeah...I guess. You know, whatever! It's hard for me to know who's memory I'm in.

Caboose: Oh yeah, same thing happens to me with things that I'm in. Like my helmet. That's why I wrote my name on the inside of it. I used my tongue. That was hard to do. Now I can't pronounce my *GRAGGH*

Epsilon: I don't know, a bunch I guess.

Tucker: Are they all assholes?

Epsilon: (sarcastically) Yeah, a dozen different fragments, we all have the same shitty circle of friends. Lucky us.

Cut to the Mother of Invention mess hall, where Theta is showing North holographic fireworks

Theta: Thank you! I worked super hard on it!

South Dakota walks by and sees the two of them.

South then leaves. York and Delta sit down at the table

MOTHER OF INVENTION MESS HALL, MANY YEARS AGO...

York: Hey Theta! You mind if I talk to North for a second?

York: Need you to shut down while we chat, okay? Delta too. You know, it's the rules.

North Dakota: It'll be okay. I won't talk too long.

York: I need to ask you about something.

York: I need to ask you about the Alpha.

North Dakota: Where did you hear that word?

York: Same place you heard it...(points to head) Up here.

York: Wash...are you eating inside your helmet?

Washington: (slightly muffled) Maybe. Delta said they got the helmet waste disposal out of beta. That it would make my eating more efficient.

York: Haha, and you believed that? Maybe he is getting more personable.

North Dakota: It's not an Alpha, Wash, it's the Alpha. Theta thinks about him a lot. More than thinks, really. He's obsessed.

York: Delta too. You know how all the units call each other brother? They call this one "father". No...that's not right.

Washington: (slightly muffled, holding a banana) I thought the Director would be their creator.

York: Haven't you been paying any attention in class? A.I.s aren't created; they're copies of someone.

North Dakota: But our A.I.s are just fragments.

York: Which begs the question...where's the original?

Washington: (slightly muffled) So this Alpha thing is what, creates the fragments?

York: Jesus, will you swallow for god's sake?

Washington: (swallows, now holding an apple) It creates them?

York: Yeah, it's the "or something" part that has me worried. 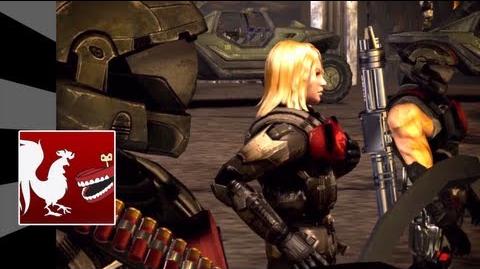 Retrieved from "https://rvb.fandom.com/wiki/Oversight?oldid=147043"
Community content is available under CC-BY-SA unless otherwise noted.