At the desert, Tucker, Grif, and Simmons ponder over Epsilon, who is now stored inside Carolina's Mongoose. When Carolina and Washington return, Carolina asks Tucker to come with her as she has questions to ask Epsilon. At the Elephant, Washington installs the data card into the vehicle's systems to see the information encoded on it. As he does this, Tucker begins to hit on Carolina, and points out their similarities, such as their armor color. Carolina soon becomes angry at Tucker and Caboose after realizing that they left the monitor at the Freelancer Offsite Storage Facility.

Meanwhile, Grif tells Sarge that his wish for the Blues to die is going to come true. However, Sarge corrects him that he wished for him to die, going as far as to climb to the top of their base to wait for a shooting star so he could wish for Grif's death. Sarge then reveals that he even created a jingle describing the death, to which he and Simmons sing along. Grif becomes distraught at the fact that Simmons also knows the song, to which Simmons expresses his relief knowing where the jingle came from. When Wash discovers that the rest of the files on the card are corrupted, Carolina privately tells him that she plans to go to an old island fortress for more information. As she departs, unaware that Epsilon is on board, Wash tells the Reds and Blues to get inside the temple before dark.

In the past, the Chairman sends a letter to the Director about the failure to secure C.T.'s armor. Carolina enters the training arena to practice her hand-to-hand combat, telling F.I.L.S.S. to restart the program every time it would end, faring better each passing time. York, out of armor, watches her from above. North soon enters and joins him, as Theta can't sleep. York discusses his concern that the A.I.s' presence in their heads might not be for the best, as Delta stayed up all night running calculations for trivial probabilities and Theta's inability to sleep passed on to North. York also worries about Carolina's obsession to become stronger, referring to the leaderboards, which still displays Tex as Number 1. North then leaves, leaving York alone to watch Carolina train even harder.

Cut to Tucker, flanked by Simmons and Grif

Cut to Carolina's Mongoose which springs to life at the questions. Epsilon's voice speaks through the Mongoose.

Epsilon: I feel like running over each, and every one of you.

Tucker: So pretty much the same as before.

Grif: Y'know Simmons? I think I'm gonna let you call "Shotgun" on this one.

Simmons also runs off. Epsilon's AI form appears on the windshield of the Mongoose.

Tucker: What are you complaining about? You finally got your own body.

Epsilon: My own body? Tucker, I'm a fucking tonka truck!

Tucker: Okay, yeah, but you could literally pick up chicks with this thing!

Epsilon: Oh, yeah, because every girl just dreams about settling down with Optimus Prime - HONK!

Epsilon flashes as the Mongoose's horn goes off. Epsilon turns around as Caboose stands up from behind the Mongoose.

Epsilon: Caboose! Don't do that.

Sarge runs in front of Tucker

Sarge runs away as Epsilon vanishes

Carolina and Washington run over the hill to where the Blues are.

Carolina: Tucker, bring Epsilon over here. I've got some questions for him.

Cut to the Elephant, where Carolina speaks to Wash who is inside using a computer.

Washington: I think so.

The screen displays the Project Freelancer emblem which spins and reveals several pictures, among them, Epsilon's former Monitor body.

Tucker runs up behind Carolina

Tucker: So, uh, what do you need Church for?

Carolina: I just told you.

Tucker: Oh... yeah, but I mean you could talk to me instead! 'Sup girl?

Carolina: Why on Earth would I ever want to do that?

Tucker: Uh, aquamarine? Turquoise? Hey, what the fuck color is this anyways?

Washington: Listen, it's important that we figure out what's on C.T.'s data pad. It might be our next clue to finding the Director.

Tucker glances at the screen.

Tucker: Hey I know that thing!

Washington: Wait, you recognize this artifact?

Tucker: Hell yeah! It was the biggest pain in the ass!

Caboose runs up behind Tucker

Caboose: Ah, it's Church! Yeah, he had lost a lot of weight.

Tucker: Oh yeah, Caboose transferred Epsilon from a memory unit into that thing a long time ago.

Carolina: Where is it now?

Tucker: I dunno, who cares?

Tucker: Oh. Well in that case, uh, Caboose tell her where it is.

Cut to the Reds, standing not far away.

Grif: Well Sarge, You've always wanted to watch a Blue die. Looks like your going to get your wish after all.

Sarge: Actually Grif, it's always been my wish to watch you die.

Sarge: Yep. Every night after you boys would retire to your bunks, I would climb up to the top of the base and just wait. Hoping I would see a shooting star. So that I could wish for your violent, and unbearably painful demise.

Grif: Okay, you can stop now.

Sarge: I even even had a little jingle to go along with it.

Sarge: (singing) "I just wish that Grif was dead!"

Grif: I hate you.

Simmons: (singing) "Put a bullet through his head!"

Grif: What the-? Simmons how do you know that song?!

Simmons: Oh, it's been in my dreams for years! Now it all makes sense! Oh thank God!

Simmons: I thought I was crazy when I woke up with that rifle in my hands!

Sarge: Heheheh, well ain't that the power of music!

Grif: Simmons! Why didn't you tell me about this?!

Simmons: Oh, shut up. It wasn't even loaded.

Carolina: How can you just leave an ancient alien artifact on the floor of a warehouse?!

Caboose: Okay, hold on, I mean, to be fair, you know, he had already broken it.

Carolina: Ugh! I can't believe we came all this way for nothing!

Carolina runs off. Wash turns to the other Blues.

Washington: You guys are not making my life easy right now.

Tucker: Do we ever?

Cut to Carolina followed by Wash underneath one of the temple structures.

Washington: So, what's the plan now?

Carolina: There's an island nearby that I want to visit. Shouldn't take more than a day or so.

Washington: That old fortress? Carolina, I'm not sure there's a-

Carolina: Wash. Trust me on this?

Washington: Right. You should probably listen to your instincts.

Carolina: You stay here and keep the sim troopers from causing any trouble. I won't be long.

Cut to Carolina, driving away on her Mongoose. Wash can be heard adressing the group.

Washington: Alright, everyone move into the temple. It'll be getting dark soon.

Tucker: Hey, Wash, where exactly is she going?

Washington: She lost something. I think she just needs some time to try and find it again.

Fade to the Freelancer training floor where Carolina makes her way to the center. The Chairman's voice is heard in the backround.

FREELANCER TRAINING FACILITY. MANY YEARS AGO...

Chairman: (voice over) Dear Director, the loss of military equipment is a severe infraction. I should not need to remind you that all UNSC property, especially our more experimental technologies, must be kept from the hands of our enemies at all costs. In these trying times, vigilance is paramount.

Carolina reaches the center of the training floor. She is soon surrounded by two rows of rotating green targets. Carolina readies herself and begins to expertly punch and kick the targets, turning them red. Cut to York, who oversees Carolina's training, whilst unarmored and with a coffee mug. He yawns as North, also unarmored walks up behind him. North pats him on the shoulder.

York: Yeah. She's been like this ever since we got back from the last mission.

North Dakota: You gotta be kidding me, she's always been like this.

York: Well, yeah. I mean- She never did know when to stop. But now it's like she doesn't know how to stop. Always training. I guess the leaderboard beckons.

York and North look at the leaderboard. Tex is still number one, while Carolina is number two.

North Dakota: You know you don't have to watch over her.

York: Could say the same to you about South.

York: So what are you doing awake?

York: Ah, one of the side effects they don't tell you about. Having someone else's voice in your head sure does take some time getting used to, doesn't it? Delta's always running these probabilities.

York: He says it's fun. You know, did you know, stastistically, you're as likely to get hit by lightning as you are to die in a Pelican crash?

North Dakota: Seems like it would be higher considering our line of work. Guess I'm due for a few lightning bolts.

The two Freelancers laugh as F.I.L.S.S is heard announcing the results.

F.I.L.S.S: Round complete. A six-point-three percent increase in efficiency that round Agent-

F.I.L.S.S: Resetting training room floor for next round.

Carolina begins to take out the targets yet again.

York: Is Theta up late often?

North Dakota: You're wondering if he gets scared a lot.

North Dakota: Well, it happens. Mainly at night. He likes when I walk the halls. When we were kids, my dad would have to drive South around in the car to get her to fall asleep. It's kinda the same thing.

York: I wonder if they're all like this, the A.I.s. You know, jittery, nervous, no, not nervous...

York: Yeah. Anxious. It's like Delta always thinks that something bad is always about to happen. I don't get it. What do they have to worry about?

Cut back to Carolina who continues to attack the targets. North yawns.

York: Why don't you just pull him for a night? Get yourself some sleep.

North Dakota: He gets even more scared when I do that. I feel obligated to help.

York: I see why they picked you.

York: Well, he has to face his fear at some point. If they want to be human that's a good place to start.

North Dakota: What can I tell ya? I guess some things are just harder to face than others.

North Dakota: Don't stay up too late. You need your rest.

Carolina attacks the targets once again. She completes it extremely quickly.

Cut back to York who lays back into his chair.

F.I.L.S.S: Resetting training room floor for next round.

York: I think we all could use some rest. 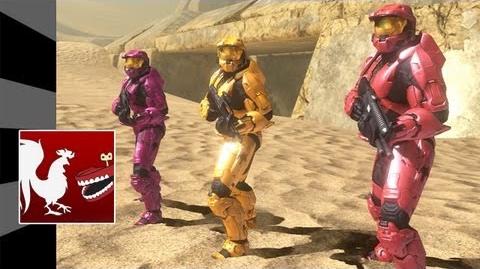 Retrieved from "https://rvb.fandom.com/wiki/Out_of_Body?oldid=135885"
Community content is available under CC-BY-SA unless otherwise noted.