The episode, along with follow-up Invaders from Another Mother, was written and voiced by members of Funhaus, the Los Angeles arm of Rooster Teeth.

Vic: Y'know, when most people talk about the Reds and the Blues, they're talking about my boys at Blood Gulch but, lot's of dudes forget that there's a bunch more primary coloured commandos all over the galaxy. And they're all idiots.

Cuts to a desert as a soldier is walking by and farts in his armor soon after.

Drag: Dammit Turf, they all stink. Every single one always stinks.

Turf: Yeah, but this one reeaally stinks

Drag: We have the worst fucking CO.

Morgan: What's the point of this stupid helmet if it doesn't keep the own smell of your farts out

Sue: You just picked the wrong helmet Morgan. I can't smell anything and I look cool as hell. Oh yeah mmm ooh check that ass yeah check my ass yeah

Drag stops running and is tired

Drag: Morgan's right, Turf. Plus even if we did find some Blues--

Morgan: Which we're not.

Drag: I'm not sure anything could survive out here for more than a day or so.

Turf: I'm sorry, but was that five laps, Lieutenant?

Drag: Sir, I'm carrying a pound of sand between my buttchecks and i am literally covered head to toe in armour.

Turf: That's a personal problem, Lieutenant, and this is a professional situation. We have an assignment: to eradicate the Blue--

Turf is silenced as someone is communicating through the radio Sue: Sir! Santos is calling from the ship.

cuts to a ship in space

Santos: How come everytime I check in on you guys, you always assume something's wrong?

Morgan: Tell him it's because something usually is wrong.

Turf: Everything's fine down here, no sign of anything. How's everything on the ship?

Santos: Ug, well, there's no wine bars, I can tell you that.

Drag: He says that every time.

Morgan: And it's never funny.

Turf: Well, hold on, it was a little bit funny the first time.

Sue: Why would they put a wine bar on a spaceship?

Drag: Exactly. It doesn't make any sense. Spaceships don't have wine bars, so why is he so surprised?

Turf: It's absurdist humour, it doesn't have to make sense that's the joke.

Sue: Yeah. But why would they put a wine bar on a spaceship?

Santos: Forget it, you guys are always shitting on my dreams.

Turf: Santos, get on with it.

Santos: I just wanted to let you know that we think we may have fixed the ship's artificial vocal modulator.

Turf: So, we'll be able to communicate with the ship's AI.

Drag: Great, someone new to argue with.

Morgan: Wait, how'd you even do that?

Santos: I just read the manual.

Turf: Okay. We're gonna beam back to the ship

Santos: Cherry I need you!

Cherry: Of course, Major Santos. What do you need?

Santos: Can you beam back Turf, Drag, Morgan and Sue from the desert?!

Cherry: Chew? The desert, sir? Unfortunately, I don't have a psychical mouth, so i cannot--

Santos: No. Sue from the desert! Teleport them back.

Turf: Ready up. We're headed back to the ship.

Drag: *sigh* I hate this part. It feels like someone crams a big electric rod up my--

Morgan: I can't believe you named her Cherry.

Santos: Its cause she's so sweet!

Morgan: She belongs to an alien race bent on the eradication of OUR species.

Cherry: That was the old me. The new me is happy to serve you, feeble human scum.

Turf: Is everyone okay?

Drag: I think I just pooped more sand than poop.

Drag: This is my favourite part.

Morgan: Seriously? Every day we do this, and every day all of you laugh.

Turf: Alright. Settle down, settle down. Listen up boys.

Morgan: What does that... mean?

Turf: Enough! I understand your recent frustrations but as you all know, we have a directive! Our assignment is to destroy all the Blues, no matter the cost to ourselves.

Drag: Or our butts.

Santos: Think of the butts, Colonel.

Turf: Regardless, like any good leader, I am attuned to the moral of this squad. Ergo I prepared a presentation designed specifically to raise spirits and remind all of you exactly why you're here.

Santos: Wait, we have popcorn?

Drag: Of course we do. It's popcorn, not a fucking wine bar.

Turf: Well, as I'm sure you already know, we're unit FH57. A group of Red soldiers who battled for months against the unit AH13. Naturally, we defeated them--

Santos: Hang on. WE didn't really defeat them. Cherry did.

Turf: Okay, fine. So we kind of defeated the Blues. During a routine observation mission, Private Sue reported seeing a bright object appear in the sky. Approximately three minutes later that object came crashing down directly onto the Blue base. Upon further inspection we discovered that the noise we heard was in fact an alien spacecraft with a horrible sense of direction.

Cherry: That incident was USER error, thank you very much.

Turf: When we inspected the wreckage, we found that the alien crew, as well as every member of the Blue squad, was dead.

Turf: Private, please do not interrupt the presentation. These slides do not make themselves.

Turf: Poor little nothing! Thankfully for us the spaceship remained intact and... Cherry was kind enough to let us come aboard.

Cherry: It was the least I could do after the crash. Uh, that was entirely user error, as I mentioned before!

Turf: So, was it our plan to have a giant spaceship crash down on the Blue base? No. But, did we capitalise on that opportunity like a couple of badass soldiers and transfer that seemingly in this battle without cerulean enemies?

Morgan: Uh, not to be a downer, but that was months ago. Since then, we've just been wandering around in this ship searching for Blues with nothing to show for it.

Drag: Morgan's right. It might be our mission to seek out and destroy any Blues we find, but we can't find any Blues.

Sue: And I'm all out of popcorn!

Simmons: You ever wonder why we're here?

Grif: It's one of life's great mysteries, isn't it? Why are we here? I mean, are we the product of some cosmic coincidence, or is there really a God, watching everything? Y'know, with a plan for us and stuff. I don't know, man, but it keeps me up at night.

Simmons: What? I mean why are we here, in this canyon.

Tucker: What are they doing?

Tucker: I said, what are they doing now?

Church: God damn I'm getting so sick of answering that question!

Tucker: You have the fucking rifle! I can't see shit, don't bitch at me because I'm not going to just sit up here and play with my dick--

Turf: Blue's back on the menu, boys! 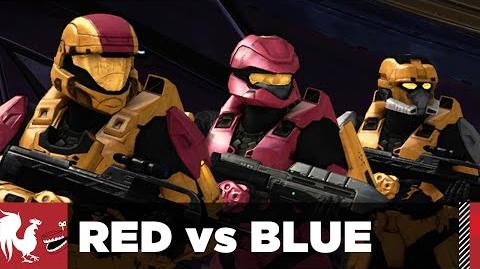 Retrieved from "https://rvb.fandom.com/wiki/Orange_is_the_New_Red?oldid=139375"
Community content is available under CC-BY-SA unless otherwise noted.