A trio of New Republic soldiers are heard communicating with each other via radio. After a "blue team" soldier and a "red team" soldier confirm their positions, the blue team soldier contacts "gold team" for their status, but gets no response. When the blue team soldier asks again for gold team, Grif interrupts and tells his soldier, Bitters, to have the blue team refer to them as "orange" not gold. Simmons, with Caboose beside him, tells Grif to get off the radio and let the teams be, prompting Grif to do so before ordering his team to get in position.

Grif, Simmons, and Caboose regroup at the entrance of a mining facility where Simmons opens a security door. Caboose absurdly runs inside and fires his rifle, only to be shooting a wall directly in front him. As the three enter the facility, Bitters radios Grif and tells him that they have visual on the compound. As Grif, Simmons, and Caboose move deeper inside the compound, Jensen, Simmons' red team lieutenant, contacts Simmons and expresses her loyalty to him. Simmons, however, nervously assures her and Grif tells him to man up since his squad consists mainly of women. Grif then radios everyone to get ready and the three run into a group of Feds. In response to seeing them, the three scatter in fear.

This action causes their squads to clumsly retaliate and, unfortunately, enhance the chaos: with Grif's squad falling on reinforcements, Caboose confusing his lieutenant into following him, and Jensen running over Caboose's lieutenant with a Warthog. As the chaos ensues an alarm bell goes off. Vanessa Kimball enters the fray, revealed to be a training exercise, and scolds Grif, Simmons, and Caboose for their poor performances. She then tells them to debrief their squads and leaves.

Meanwhile, at an actual Federal Army of Chorus outpost, Tucker, his squad, and Felix recon the compound from nearby. Tucker asks Felix if he may use the latter's sniper rifle, but Felix refuses. Palomo, one of Tucker's soldiers, states that he likes to cup his hands over his eyes in the form of binoculars, in which Tucker tells him to shut up.

Voices are heard conversing over the radio.

Smith: (voice over) Red team, this is Blue team. We are in position, how copy? Over.

Simmons' Lieutenant: (voice over) Blue team, this is Red team. I copy, Blue in position. Over.

Smith: (voice over) Gold team, this is Blue team. All units are in position and awaiting further instructions, what is your status? Over.

Smith: (voice over) Gold team, I repeat, what is your status? Over.

Smith: (voice over) What?

Bitters: (voice over) Actually, uh, we were wondering if we could maybe change our name to, uh, Orange team.

Smith: (voice over) What difference does it make?!

Cut to Grif on the radio.

Grif: You tell them it makes a big difference Bitters, because I am orange! I am not gold! I am not yellow! I am fucking orange!

Grif turns to look at Simmons and Caboose standing beside a door.

Simmons: Get off the radio. The teams are fine.

Simmons: You're gonna blow our cover.

Grif flips Simmons off and speaks on radio.

Grif: Go tell the Blue team to suck a dick and then get in position.

Bitters: Whatever you say, Captain.

Grif walks up to where Simmons and Caboose are.

Simmons: We're infiltrating an enemy base and you're bitching about colors?

Grif: It's a misleading title, people could get confused!

Simmons faces the security door behind him and crouches.

Simmons uses some sort of hacking tool to hack the passcode lock.

Simmons: Oh man, what if this doesn't work?

Simmons: What if it's a trap?

Simmons: What would Sarge say in a time like this?

The door opens. Caboose sprints inside yelling and unloads a full assault rifle clip into the wall. Cut to reveal that Caboose has written "CABOSE" in bullet holes on the wall.

Caboose: Did we win?

Grif: Oh, so I talk on the radio and it's jeopardizing the mission, but that happens and everything's fine?

Bitters: (over radio) Captain Grif, we have visual on the main compound, over.

Cut to Bitters and two other gold team members on a cliff looking down onto the enemy base.

Cut to Caboose's Lieutenant and another blue team member behind some crates.

Smith: Stow that kind of talk Bitters. Our C.O.'s put a lot of effort into this plan, so why don't you show a little faith?

Cut to Simmons and Grif sneaking down a hallway.

Simmons: Alright we're almost there. Is everyone ready?

All of the Lieutenants: Ready.

Caboose randomly appears standing in the same position as before.

Simmons' Lieutenant: (voice over) Captain Simmons, Jensen has something to say to you.

Cut to Jensen and another red team member hiding behind a wall looking at a Warthog with two enemy soldiers near it.

Jensen: I just wanted to say that no matter what happens, it's been an honor working with you sir.

Cut back to Grif and Caboose.

Grif: What the fuck was that?

Grif: Did you just stroke out for a second? You sounded like Caboose.

Caboose: Look at me I'm smart. I like slide rules and protractors. Oh, I can't wait to do some protracting.

Simmons: So I still have problems talking to girls. Big deal.

Grif: Yeah. It is! Especially when your squad consists entirely of girls. Now man up!

Simmons: Oh no, this is like junior high all over again...!

Simmons: Why do I have to play in the women's league?! I wanna be a mathlete, Dad! A mathlete!

Grif: Goddamn it! Do I have to do everything around here? (over radio) Everybody get ready. We're going on my mark. 3. 2. 1.

Grif: ...Every man for himself! AAHHHHH!

Grif: Shield me with your bodies! It's important that I live!

Cut to Bitters and gold team on the cliff.

Bitters: Wait what? Whats going on?

The soldier on the turret turns and begins to fire on Gold team, who start to back up and fall backwards off the cliff.

Gold team fall down and land on top of the reinforcements.

Cut to Caboose running across the battlefield yelling and shooting

Cut to a warthog driven by Jensen and another red team member.

Warthog drives out and runs over Smith.

Cut to the middle of battlefield where Simmons and Grif are running around yelling indistinctly. Suddenly an alarm buzzes and everyone stops. Kimball walks out.

Kimball: What the hell was that?!

Cut back to Grif and Simmons. Caboose runs up yelling behind them and soon stops.

Kimball: What is the point of these training excersises if you people aren't going to work together?

Simmons: But we did! We had team names and everything!

Kimball: You had a plan you were organized but once again you crumbled under pressure. (sighs) Lieutenants, debrief with your COs, everyone else, round up all training weapons and uniforms. That's enough capture the flag for today.

Grif: Whoa, and what the hell are we supposed to say? "Hey guys, sorry you still suck. Turns out we suck too!" At least we have something in common.

Kimball: Tell them what they need to hear. Tell them that they can do this, and that next time they will be better.

Simmons: So you want us to lie to them?

Grif: (sighs) I hope Tucker has it better than this.

Cut to a sniper rifle scope aiming at a Federal Army of Chorus soldier operating a turret.

Cut to show Tucker, Felix, Palomo, and two other soldiers in a tunnel.

Tucker: You think I could have a turn with that sniper rifle?

Palomo: Uh.. sometimes I.. like to take my hands and cup them around my eyes. Like little hand binoculars.

Tucker: Shut the fuck up Palomo. 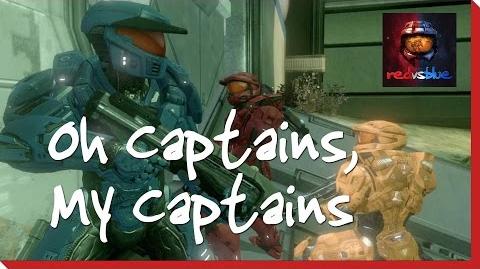 Retrieved from "https://rvb.fandom.com/wiki/Oh_Captains,_My_Captains?oldid=143816"
Community content is available under CC-BY-SA unless otherwise noted.