Somewhere in space, Lopez jokingly narrates an internal monologue in the parody of "Star Trek", until he is then discovered and beamed aboard a ship. The ship's passenger approaches Lopez and decloaks before him. Lopez then asks for help.

Meanwhile, back on the remote moon, Grif speaks to a collection of volleyballs with painted depictions of the Reds and Blues. Highly overzealous, Grif impersonates the other team members, mimicking their voices and even talking to himself. As Grif begins to grow somber over a deflated Church volleyball, he is interrupted by Locus, who has arrived on the planet and is revealed to be the pilot of the ship that discovered and beamed aboard Lopez.

Locus' appearance startles Grif, given his history with the Reds and Blues, but Locus assures him that he's not going to hurt him and reveals Lopez. Locus then tells Grif that Lopez has filled him in on the current situation of the Reds and Blues and offers to help Grif rescue the rest of the team. Grif is delighted to talk to another person after an extended time alone on the deserted moon and stuns Lopez and Locus with his fluency in Spanish. Grif explains that he studied Spanish to "learn Lopez's lines" during his impersonations.

Locus then convinces Grif to join him and Lopez in the rescue attempt. Grif remains confused about Locus's intentions yet is enthusiastic about his reformation and agrees. After the three board Locus' ship, Grif's incessant chatter annoys Locus, who does not remember Grif being so talkative.

Open to space, the camera showing numerous galaxies and planets. As the camera pans over a red planet with rings, Lopez speaks.

The camera pans to the left to reveal Lopez's flying head.

The camera pans around to the back of Lopez's head.

Cut to Lopez's head being dropped on the floor of a ship.

Locus decloaks behind him.

Cut to various scenes of the place the Reds and Blues were at before leaving for Church.

Grif: Listen, Simmons. Shh. I got... some things to say. To you. Some things that I gotta get off my chest buddy! (whispering to himself) Buddy? Nah. Not buddy. Stupid. Friend? Friend. No, friend! Definitely friend. (back to regular tone) Anyway! I've had a bit of time to think about some things. Lots of time actually. Oodles of time! Oodles of buckets of times of time. Tiempo de Mucho. Mucho de Tiempo! Now, listen, Simmons. (to himself, again) Sim-mons. Sim- Cinnamon. Similaria- Gaah! Focus, Grif! (back to Simmons) Now, things ended really bad out there, buddy, (to himself) no, friend! (back to Simmons) and I've been thinking. Thinking, thinking, thinking. I need to tell you that I am super duper- uh, I am so incredibly--

Cut to a volleyball, with Simmons's helmet poorly drawn onto it. Supposedly gold aluminum taped on for the visor.

Grif, in a mock-Simmons voice: Hungry? You're hungry, aren't you?

Cut back to Grif.

Grif: No! What I am trying to say is that I am incredibly-

Cut to another volleyball, this time with Sarge's helmet.

Grif: Not now, Sarge! I'm trying to talk to Simmons. It's important.

Volleyball Sarge: Not as important as your job, Grif! Y'know you're supposed to be on... guard duty, ahurk-ahurk-ahurr.

Grif: Sarge, we've covered this. Technically, I am on break.

Volleyball Sarge: It's not every week that Command sees fit to send us the latest'n'greatest in invisible hover-tank technology, Grif! Instead'a guardin' it, you're over there playin' grab-ass with Private Dick Simmons!

Grif: I'm sure the tank is fine. It's not like it's gonna disappear.

Cut to a plot of grass mowed to look like a tank.

Grif: Why are you blaming me? I left Donut and Lopez in charge!

Cut to Donut and Lopez vollyballs, right next to each other.

Grif, in a mock-Lopez voice: No vi nada, es la culpa de Grif. [I didn't see anything, it's Grif's fault.]

Grif, in a mock-Donut voice: I was in my bunk, giving myself a facial! Hee-hee-hee-hee! Entendre!

Volleyball Sarge: I can't tell you how disappointed I am in you Grif! But I'll try. I just finished swappin' out the headlight fluid n' convertin' the breaks to diesel! It was a finely tuned callback-killin' machine, and yooouu lost it!

Volleyball Simmons: I have an idea, let's make a likely list of suspects. Somebody obviously stole the tank.

Grif: C'mon guys, we know who did it. Let's just skip to Act Three.

Cut to two more volleyballs on a wall, backs showing.

Grif: Hey! We know you assholes stole our tank! Now you gotta give it back!

Camera reveals the volleyballs are Tucker and Caboose.

Grif, in a mock-Tucker voice: Look who finally showed up. You're too late Grif. It's over.

Cut to a deflating Church volleyball.

Volleyball Tucker: You were supposed to bring the air pump, Grif. Now I have gonorrhea and a dead friend.

Volleyball Caboose: It's too late! It's over! I'm sad now, and forever! There's nothing you can do about it, kangaroo banana kangaroo! My heart's in a pouch!

Grif: No, no, no, no, no! Not again! This is not gonna happen again! Now listen, everyone. I got a thing. I gotta say it. I'm like, super, duper, spectacularly s--

Cut to reveal a ship. Locus decloaks, walking towards Grif.

Locus: I would know.

Locus: You're not hallucinating.

Grif: Then you're here to kill me!?

Locus: I'm not here to kill you either.

Grif: No. That's bullshit, dude. You are like, death personified.

Grif, stepping back: Huah! Fuck, your voice is still so scary!

Locus: If even half of what this robot says is true, then you're going to need my help to save your friends.

Grif backs away from Locus.

Grif: Aw fuck, you are real!

Locus: We've been over this. I'm real, and I'm here to help. Assuming you've still got any sanity left in that helmet of yours.

Camera cuts to the volleyballs Grif has made, lined Caboose, Deflated Church, Donut, then Sarge, Simmons and Tucker.

The camera cuts to Locus, silent, before cutting back to Grif.

Locus: I don't have all the information, I only know what the robot told me.

Grif turns to Lopez, who's head is resting on a table on the ship.

Locus: I wasn't aware you were bilingual.

Grif: Huh. I had to learn. For Lopez's lines!

Locus: You have had a lot of time on your hands.

Locus: We should. My ship is ready. Just so you're aware, we're likely in for a fight.

Grif: Then there's no time to waste! Oh, wait.

Camera pans to the volleyballs again.

Grif: I can bring the gang, right?

Cut to Locus and Grif, cramped in Locus's ship with Grif's various volleyballs surrounding them.

Grif: (fast-talking) This is exciting! Do you still have that sword? Are you a good guy now? Aren't best friends awesome? Do you ever miss Felix? Hey! I'm orange, just like your last partner! Cool ship by the way, I bet that's an awesome side-story. Does it have a name? How about the Locus Pocus? I hope everyone doesn't hate me. Do you ever worry about people hating you? I don't!

Grif: (fast-talking) Yeah, well, I don't remember you being anything but a huge dick, but here you are being cool, so people change. How long's this trip gonna take anyway? Do you have any music? Man, it feels good to talk to somebody again. Can I be the DJ? Is there a bathroom on this ship? Can I drive? I thought I was gonna go crazy for a while there, but I'm sane as a fiddle! (low voice) How many people have you killed? (regular voice) Where did you grow up? Do you ever get lonely?

Cut to the ship taking off.

Grif: (off-screen) Do you ever eat Migas? I love Migas! Queso, am I right? Are you a cat person, or a dog person?

Cut back to Grif and Locus inside the ship. Suspenseful music starts playing, almost as if something were going to happen.

Grif: (fast-talking) Have you ever tried growing a mustache on the inside or the outside of your helmet?

Grif: (fast-talking) Can I drive? Do you think the gang found Church? Do you ever go to church? Are you religious at all? I'm agnostic. Hey, do you want to stop for a pizza? I bet the guys are hungry. We should bring them a pizza! Pepperoni? No, sausage! Everybody likes mushrooms. What's your favorite pizza place? I like Sammie's over in Ithaca.

Locus: This is going to be a long trip, isn't it?

Grif: I hope so! We have a lot of catching up to do, partner. Speaking of which, why are you helping us anyway?

Locus: It's a long story. But mainly, it's the right thing to do.

Grif: Turning over a new fucking leaf! Dude, I am all about it! It's a new beginning for both of us! Just so you know, though, doing the right thing usually, totally sucks.

Locus: I am acutely aware of that at the moment.

Grif: So. How do you feel about Cloud Atlas?

A few seconds of silence before the screen goes black. 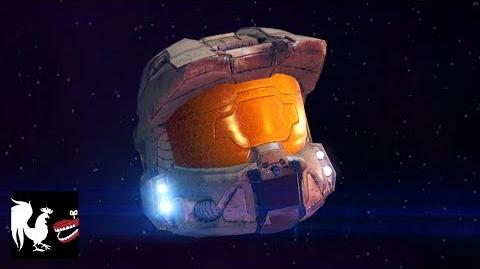 Retrieved from "https://rvb.fandom.com/wiki/Objects_in_Space?oldid=142089"
Community content is available under CC-BY-SA unless otherwise noted.