Number One is the third episode of Red vs. Blue: Season 9 and the 176th episode overall.

The episode begins with an unknown voice speaking with the Director over a situation. The Director tells him to send in "Number One". The scene cuts to North and South Dakota surrounded by soldiers. As one of the soldiers orders them to hand over the stolen data file, "Number One", emerges from the background and attacks the soldiers on the catwalk. She then takes the turret Demo Man is on and fires it at the support beams of the other catwalks, causing them, and the soldiers on them, to fall.

North protects South from the falling catwalks as the Freelancer kills more soldiers with the turret. She jumps down to North and South and the three proceed to fight several soldiers. While this is going on two soldiers get into an argument over a rifle, despite the abundance of fallen weaponry. South ends this argument by kicking one into the other, causing both to fall off the platform. Demo Man gets back on his turret and aims at South. North, seeing this, jumps in the way and takes a few bullets in the chest. Carolina fires a grappling hook at the turret and turns it downwards, causing it to destroy the catwalk; also sending several soldiers to plummet to their deaths. However, Red Demo Man manages to lands safely on a ledge and moves off-screen. As South drags North to an edge to get him out of the battle, she calls for evacuation, stating that they have injured. Carolina comes and drags the two over the edge. A dramatic moment occurs with the soldiers gathering around the edge only for a Pelican to come up with North, South, and Carolina on top of it. Carolina goes down into the Pelican, telling the pilot she's late. She sarcastically remarks "take it out of my tip." As the Pelican flies away, the entire facility suddenly explodes.

At Blood Gulch, the Reds continue to fire at the cliff. They begin to devise a plan to sneak up on the Blues, when Church walks up asking to talk. The Reds debate what to do with him and Church realizes they don't know who he is yet. Sarge decides to let him talk but Donut wants to shoot him. They come to a compromise allowing Donut to shoot Church once while Church gets five minutes to talk. Donut asks Church whether he wants to be shot in the shoulder or in the foot. Church tells him to shoot his foot, unaware that Donut actually intends to shoot him. As Church begins talking, Donut takes aim and fires, with Church screaming in pain. Donut tells him that his five minutes have started.

The screen is black. Slow beeping can be heard. There's a small noise before it cuts to a holographic model of the Research Facility. Behind it is the director, standing in front of a leaderboard. The camea pans up to show the names "North Dakota" and "South Dakota", which are flashing red and black.

Operator: Situation is critical, sir. Should we do something?

Director: Yes. Send her in.

Operator: Roger that. Come in Number One, Number One you are green.

Cut to the soldiers surrounding North and South.

North Dakota: Well, out of the frying pan and into the fire.

North: How 'bout you save your jokes until we get out of this?

South: Where the hell is extraction?!

Cut to Demo Man with soldiers standing behind him. They're all aiming at North and South.

Demo Man: Give us the data file now! You will be taken into custody! We can do this the easy way or the hard way! There is no escape, so give us the damn data file!

The soldier in black leaps down and kicks the soldiers around them off the platform. They then punch the Demo Man away from the turret and uses it to shoot a support beam, causing the platform, and the soldiers standing on it, to collapse. We can see by their armour that they are, in fact, female.

North grabs South and shields her with his body as the other platform is broken. The two then get up and look at the female operative attacking the soldiers.

North: Son of a bitch.

South: What? What's she doing here?!

The femal operative uses the turret to shoot a few soldiers who are getting too close, kicks it so it spins while firing off bullets, ducks the turret, and backflips onto the helipad. Her armour changes from black to a light blue color as she spins.

She begins engaging the armed soldiers in hand-to-hand combat. Cut to a soldier looking for a gun while the Freelancers run or flip around behind him, kicking, punching and shooting any soldier who gets in their way.

Unknown Soldier #2: Uh, I hate to bother you but I think that's my rifle you're holding.

Unknown Soldier #1: (firing randomly at the Freelancers ) What the hell are you talking about? Just grab any rifle! Like look at that, there is seriously a pile of rifles...

Unknown Soldier #2: (talking over him) No, that's my good luck rifle. That's the one I sleep with every night.

They both cry out as South kicks them off the platform. As the Freelancers fight, Red Demo Man can be seen in the background getting back on his turret and aiming it at South.

North pushes her out of the way and gets shot several times in the chest and visor.

The female operative flips backward away from the line of fire and fires a grappling hook at the turret. It latches to the front.

The female operative yanks the hook backwards and the turret smacks the Demo Man in the face. It fires beneath him, collapsing the catwalk beneath. Most of the soldiers fall to their deaths, but the Demo Man falls on a ledge jutting out under the catwalk, and attempts to get up. South is seen helping North walk.

She tosses North against the railing rather painfully. The twins then both fire their weapons at the remaining soldiers.

South: Come in, command! We have wounded! You need to get us out of here, RIGHT NOW!!!

The female operative runs behind the twins and grabs them.

She tosses herself off the edge and yanks North and South over with her.

There's a moment of silence, and the camera pans back to show the remaining soldiers moving toward the edge. Before they can get there, a Pelican rises up, with the Freelancers on the roof.

Female operative: (gesturing) Sorry about the mess, fellas. (As she starts walking towards a hatch in the roof, she turns on her helmet radio.) Package is secure. Everybody on board.

She climbs down a ladder leading into the Pelican's troop bay. She enters the cockpit and climbs into the co-pilot's seat.

Pilot: Somebody call for a ride?

In the background, South can be seen helping North into a seat.

Pilot: Ah, well, you can take it out of my tip.

The Pelican pivots and flies off. The base explodes behind them.

Aand cut to Blood Gulch, with rockets hitting the cliff.

Sarge: (after Simmons stops) Did we hit 'em?

Donut: I have a plan. We need to use stealth.

Donut: Okay. Let's try this. Sir, you lay down some cover fire. Simmons, the two of us can sneak around their backsides and slip on in.

Simmons: Ok. Just saying stealth was enough, man. We don't need to expand on good ideas. Especially after other people have already agreed to them.

Church: Hey, Reds! Yo! Hold on a second. Cease fire.

Donut: Who the hell is that?

Sarge: It's one of the Blue guys. He's just walkin' up here.

Donut: By himself? That guy is fucked.

Simmons: Ok, see? Right there. You changed the way you said it again. Could you not do that please?

Church: Hey guys, hold up. Can you hear? Hello?

Church: (dodging the bullets) Ah! What the hell?! Cease fire man, it's me!

Donut: Yeah, we know it's you, dipshit. That's why we're shootin'.

Church: I just wanna talk for a second!

Simmons: Yeah, so what? What does that mean?

Sarge: Maybe we should give him a chance. See what he has to say. He could provide some intel by accident. Or give us the Blue perspective. I always wanted to hear that.

Donut: I wanna shoot him.

Simmons: Ok, just to be clear. I understand what you meant by that. I get that you want to shoot him with bullets.

Sarge: Let's hear him out. Then we shoot him.

Donut: How about I just wound him? Then he can still talk and I get to shoot him. That's a win-win.

Church: Not for me, I get shot!

Simmons: Ok, how about this? Donut gets to shoot you in exchange for you getting to say what you need to say.

Donut: Five minutes of talking, for one shot. Where do you want it, Blue? The shoulder or the foot?

Church: Well, obviously I would pick the foot, but I don't want you guys to shoot me in-

Church: OW! SON OF A BITCH! 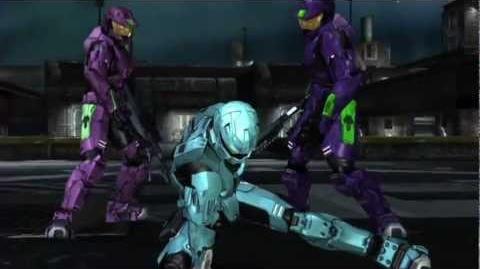 Retrieved from "https://rvb.fandom.com/wiki/Number_One?oldid=140469"
Community content is available under CC-BY-SA unless otherwise noted.