Nobody Likes You is the seventh episode of the second season and the twenty-sixth of The Blood Gulch Chronicles.

Simmons inquires on what the Blues are doing shortly after he and Grif arrive at Blue Base with Doc. Tucker hears them and informs Church of Red Team's arrival. Grif asks Tucker as to why he was kneeling in front of Church, but Tucker denies any possible conclusions made by him. Caboose attempts to lie to the Reds by saying they were "just playing a game", but is told by Church to let him and Tucker handle the situation. Church, who is unable to face the Reds due to his damaged legs, verbally threatens to shoot them if they don't leave. Grif retorts by asking if he would like to threaten them directly. Church attempts to turn around, but is unsuccessful in doing so, reluctantly telling Grif no. Grif then calls him a punk.

Simmons finally intervenes and tells everyone to calm down; telling the Blues that they are not there to fight, but to give Doc back instead. Tucker tells him that he cannot, due to their previous deal they had. Grif ignores the deal, telling them they don't want Doc anymore, but Church tells him they have no more "prisoners" for them to trade, and that Doc was their last one. Grif, followed by Simmons, then ask if Church has a problem with them, noting that he is still facing the opposite direction. Caboose yet again attempts to lie to the Reds by saying that Church is "shy", but is told to shut-up. Church finally tells them to leave as they don't want Doc back either, and that they are also doing "something private" as well. Grif and Simmons begin to leave, telling the Blues they still have a chance to get Doc back. Church tells them to "beat it", and the Reds, along with Doc, leave for Red Base.

Half-way through the canyon, Grif and Simmons decide to leave Doc in the middle of Blood Gulch as they still do want him back at their base. Doc insists that he go back with them as he has no place to go, but he is starkly rejected.

Back at Blue Base, Church asks Tucker if the Reds have left, but Tucker cannot see clearly at a distance. Caboose, who is looking through the scope of the sniper rifle, informs Church that the two Reds are leaving Doc in the middle of the canyon. Caboose then tells Church through his menacing voice that Doc might attack them. Church thinks it is a plan by Red Team to have Doc infiltrate their base and spy on them. However Caboose thinks that the Reds "brainwashed" Doc to do their "dirty plans" instead. Tucker comments on how ridiculous his idea sounds. Caboose then aims the sniper rifle at Tuckers face, asking if his idea is so ridiculous that it could be true. Doc then returns, asking from afar if he could come back to Blue Team, telling Church that he could help him with his "problem" facing people. Church and Tucker tell him to go away. As the episode ends, Doc regrets purposely failing medical school in order to come to Blood Gulch.

Simmons is looking up at the Blues on top of their base.

Simmons: What the hell are you guys doing!?

Tucker: (stands up) Aw crap, the Reds are here.

Church: What? Caboose, why didn't you say anything? Hey. One of you guys turn me around. I still can't move my legs.

Grif: What were you doing down there?

Tucker: Nothing. What're you talking about?

Caboose: (from the back) We were just playing a game!

Grif: What in the hell is going on at this base?

Doc: I told you these guys're weird.

Church: Whaddaya want, Reds? Get outta here or we'll start shootin' at ya!

Grif: Oh yeah? You care to make that threat to my face?

Church: (tries to turn around, fails miserably) Uhgh... no.

Simmons: Whoa whoa whoa, calm down guys. We didn't come here to fight. We just came to give back the prisoner.

Tucker: Give him back? You can't give him back, you took him, a deal's a deal.

Grif: Yeah, well forget it. We don't want him.

Church: Well, sorry, you can't have another prisoner. That was our last one.

Grif: Hey, dude, what is your problem?

Simmons: Didn't your mama ever tell you it's impolite not to look at someone when you're talking to them?

Caboose: (from back) He's shy!

Church: (to Caboose) Shut up. (to the Reds) Look, we don't want him back, and we don't care what you do with him. Now if you don't mind, we'd appreciate if you'd leave us alone. We're in the middle of somethin'.. kinda private over here.

Simmons: Fine, but don't come asking for him back later.

Grif and Doc start heading back to Red Base.

Grif, Doc, and Simmons reassemble over a hill.

Grif: Man, I thought our team was obnoxious, but those guys are really rude.

Doc turns and starts toward Red Base.

Simmons: Whoa, wai- hey, whoa, where do you think you're goin'?

Doc: (stopping) Back to base with you guys. They don't want me over there...

Doc: What? You're not just gonna leave me out here in the middle of nowhere.. by myself?

Grif: Sorry, it's pretty clear that you're not very popular around here, and if I'm gonna make any progress at all, I can't be directly associated with you. I'm sure you understand.

Cut to Blue Base.

Church: What's going on? Are they there? Did they leave? Hey, somebody tell me what's happening!

Tucker: I don't know, I can't really see too clearly. I bet I could see better if I had that sniper rifle...

Church: Uh, Tucker, you might wanna look behind you.

Tucker turns around and sees Caboose with the sniper rifle.

Tucker: Ahhh, whatever, let's tie him up and roll him through the teleporter.

Church: Wait a second, wait a second, think about this for a minute. Why would the Reds leave him out there by himself? This has to be some kind of trick.

Caboose: I'll bet they've used some kind of brain washing technique on him. They're, they're probably planning to have him do all their dirty plans... and also the schemes...

Camera view changes to looking through the scope of the sniper rifle.

Tucker: Caboose, that is ridiculous.

Caboose: Is it? Or is it so ridiculous, (scope zooms in on Tucker's face) it's the most ridiculously perfect idea that you never thought of?

Church: Well just keep your eye on him. We'll know it's a trick if he tries to get into our base.

Doc: (from afar) Hey, guys, uh, do you think I could come and hang out at your base for a while?

Caboose: I knew it! We're all gonna die!

O'Malley: (aiming at the back of Tucker's head) Starting with you.

Tucker: Sorry, but we're kinda busy here. So go away.. or something.

Doc: Normally I wouldn't impose, it's just that I don't know the neighborhood too well, and-

Church: Listen, Doc, you're not fooling anybody with that innocent victim routine.

Doc: Hey, uh, I could help! I know more than just medicine! I'm trained in psychology too. Maybe I could help you with your problem facing people!

Church: Just.. get outta here! And tell your buddies the Reds that their little "plan" failed.

Doc: ...Well this is just great. I can't believe I failed outta medical school for this. 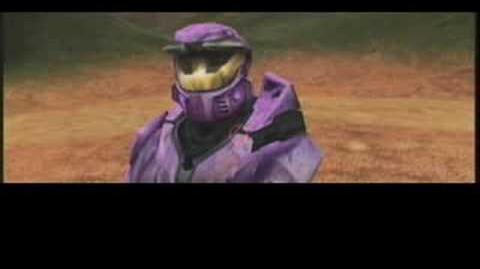 Nobody Likes You
Original 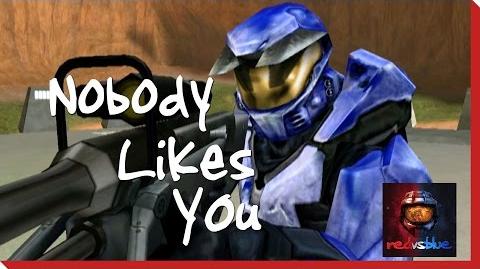 Nobody Likes You - Episode 26 - Red vs. Blue Season 2
Remastered
Add a photo to this gallery
Retrieved from "https://rvb.fandom.com/wiki/Nobody_Likes_You?oldid=128786"
Community content is available under CC-BY-SA unless otherwise noted.