New Toys is the seventh episode of the third season and the forty-fifth of The Blood Gulch Chronicles.

While Sarge and Donut try to repair the Warthog, Grif, Tucker, and Simmons argue about styling the jeep in order to attract women. Tucker still maintains that Red and Blue are the same, but no one believes him. Meanwhile, O'Malley, Doc, and Lopez inspect some real estate at Zanzibar in Halo 2; O'Malley and Doc argue over its viability and over how the computer inside should be used.

Fade in to a miscellaneous shot of wherever the Reds, Caboose and Tucker are.

Sarge: Donut, hold the light right there. No, not on me, on that. Why would I need the light, on my face?

Cut to Sarge and Donut lying under the jeep, mechanic-style.

Sarge: Don't touch anything, Donut. Okay fellas, I think I've got it. Give her a crank. ...Guys? ...Hey, what in tarnation are you knuckleheads doing up there?

Cut to Simmons and Tucker.

Simmons: No, I don't think getting new rims for the jeep's a good idea.

Grif: (in the driver seat of the jeep) Oh come on! If we all kick in, we can get some spinners, some kickass subs, hydraulics!

Simmons: What chicks, there's noone for miles. We don't even know if anyone's still alive.

Grif: What, suddenly you're a pessimist?

Tucker: Yeah, but if we do find some women, we will literally be the last men on Earth for them.

Sarge: (standing up) If you ladies are through gossipping, I could use some help fixing our vehicle.

Sounds of the jeep starting up, then it moves a foot or two and grinds to a stop.

Donut: (still under the jeep) Ya-ya-yaaaoouwwwww!

Sarge: Donut, are you okay?

Donut: I was just, petting, the bunny. And then it went in to the soup can... and part of my hand went with it.

Sarge: (lying back down) Gehrururur...

Sarge: Donut, I told you not to touch anything. You touched everything! That's the exact opposite of touching nothing!

Simmons hops up in the passenger seat of the jeep.

Simmons: What does it look like I'm doing, I'm getting in the jeep.

Simmons: Oh you're so insecure.

Sarge: (standing back up) Will you two shut up? We need to get this thing fixed.

Tucker: What's the rush on getting this thing fixed, anyway?

Sarge: Listen dirtbag, I know on Blue Team you like to lollygag a bit-

Tucker: There is no Blue Team. It's all a lie. Red and Blue are the same.

Simmons: You sound like a conspiracy nut when you talk about that stuff. The government put a chip in my brain.

Grif: The President can hear my thoughts.

Donut: We never landed on the sun.

Grif: (sharp inhale) They put fluoride in my water!

Grif: It is? No wonder I listen to so much pop music.

Sarge: We're fixing the jeep because we need to be prepared. Just as our enemies are no doubt preparing to attack us at this very moment.

Tucker: But you guys think I'm your enemy, and I'm not preparing to do anything. 'Cept get L-A-I-D.

Grif: Yeah, we can spell. We just think that was fucking weak.

Cut to Doc O'Malley and Lopez's head in some sort of base.

O'Malley: (maniacal laughter) Yes, this place will do nicely for an evil lair. It's diabolically designed!

Doc: As a student of feng-shui, I can tell you this house is 88% good luck. Also, very breezy. I like the floorplan.

Lopez: No mas quiero un cuarto solo para mí. No me gusta compartir con el vacío. [I just want my own room. I hate sharing with the vacuum.]

O'Malley: Hello? Is anyone home? Don't be alarmed, we're only here to kill you and take all your possessions. Excellent! No doubt our very presence, has scared everyone away! (evil laugh)

Doc: Why don't we just see if this place is listed by a licensed real estate agent?

Doc: But we don't even know if it's been inspected recently. It could need foundation work.

Lopez: Podría tener molde. [It could have mold.]

O'Malley: Both of you shut up. We're moving in and that's final. It has machine gun turrets, two living quarters with ample closet space, and a short commute to my secret laboratory! ...It's perfect.

Doc: Yeah, but what about the school district?

Lopez: No tenemos ningún niño. [We have no children.]

Doc: It's important to think about resale value, Lopez.

O'Malley: Resale value? Our plan is to rule the world! Not make prudent investments.

Doc: Hey look, a computer! Now I can finally update my blog.

Lopez: ¿Tienes un weblog? [You have a blog?]

Doc: Yeahah, it's great. It's just like being a real journalist, but without all the hassle of like liability and accuracy.

O'Malley: No, I need that computer for compiling evil formulas. And to rebuild the weather machine. Also to download music. (evil laugh)

Doc: It has one of those red rubber dot thingies on the keyboard. That's way better than a mouse. I call it a nubbin. Who wants to touch my nubbin? 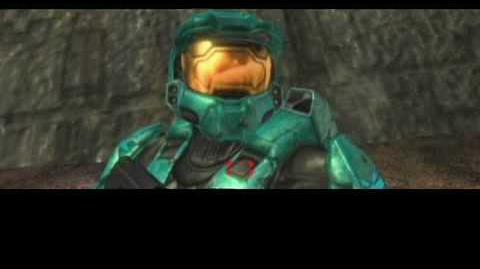 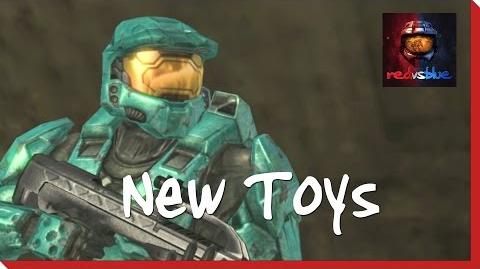 New Toys - Episode 45 - Red vs. Blue Season 3
Remastered
Add a photo to this gallery
Retrieved from "https://rvb.fandom.com/wiki/New_Toys?oldid=135634"
Community content is available under CC-BY-SA unless otherwise noted.