Motion to Adjourn is the second episode of the second season, and the twenty-first of The Blood Gulch Chronicles.

A one sided firefight erupts outside of Blue Base as Red Team relentlessly fire upon the hapless Blues. Church, Tucker, and Dufresne are in cover behind a large rock while Caboose is seen behind another. Church quickly tells Tucker to establish suppressing fire at Caboose's location, but Tucker doesn't know what that means. Church then simply tells him to go over to Caboose's rock and shoot his gun. Tucker refuses, fearing he might die in the process. Church tells him he'll give him covering fire, but Tucker doesn't relent.

Meanwhile, Grif and Simmons are seen firing their rifles non-stop at Blue Team. Grif's hand's go numb in the process. Simmons suggests for him to lay off the weapon's trigger.

At the same time, Church tells Dufresne, referring to him as "Doc", to go over and assist Caboose. Dufresne tells Church that "Doc" isn't his name, but Church doesn't care. Dufresne tells him he is not comfortable with the name "Doc" since he is not an actual doctor, but a medic. Tucker asks what the difference is. Dufresne explains that a doctor cures people while a medic makes them comfortable -while they die. Tucker then verbally makes a mental note to not get shot. Church then hastily settles the dispute over the name, telling Dufresne that his "new" name is now Doc. Dufresne reluctantly agrees, but objectively states that it may not stick. Tucker however, assures him, saying it will. Church then tells Doc to help Caboose hold his position, but Doc reminds him that he is a pacifist and unarmed. Church tells him instead to go over and yell "Bang, Bang, Bang!" at the Reds, but Doc thinks the action is "aggressive". Doc then explains that in order to get involved with their events, someone would need to get hurt. Church then purposely shoots Caboose in the foot, coercing Doc to go help Caboose.

Simmons runs out of ammunition and asks Grif to give him some. Grif tells him that he has none and is down to one bullet himself. Simmons tells Grif that he was made responsible to bring extra ammunition for Red Team after their last staff meeting. Grif is surprised, telling Simmons that he usually falls asleep inside his helmet during the meetings they have. Simmons tells him that since he had missed his job, they have no ammo to shoot. Sarge and Donut then walk up to them, who ask for extra magazine clips from Grif.

As Doc tends to Caboose's wounded foot, Tucker wonders why the Reds have stopped firing at them. Church assumes they've run out of ammo. Sarge then yells over at them, giving them the unexpected chance to surrender.

Firefight outside the Blue Base.

Church: Okay, Tucker, I need you to get up there, help Caboose shore up the defense, establish a suppressing fire, and hold that position until further notice.

Tucker: I didn't even know what half of that meant.

Church: Just go over to Caboose's rock, and fire your gun a bunch.

Tucker: That rock? Yeah, I don't think so.

Church: We do not have time to discuss this.

Tucker: Sure, no time for you to discuss it. You get to hang out here with Nancy No-Bullets shootin' the breeze. Meanwhile, I'm out there, running around, eating a machine gun sandwich.

Tucker: Covering fire? Unless that means you're gonna build a huge, bullet-proof wall between me and them, I think you need to come up with a new plan. Preferably one that involves me keeping the same quantity of blood that I have right now.

Church: No problem. Oh wait wait, does the blood have to be in your body?

Zoom to Grif and Simmons firing their respective machine guns at the Blues.

Simmons: Maybe you should lay off the trigger, you dumbass.

Zoom back to Church.

Church: Alright you, Doc, get over there and help Caboose!

Church: Yeah. I can't pronounce that, so from now on, your name is Doc.

DuFresne: I'm not really comfortable with that. I'm not a doctor, I'm a medic.

DuFresne: Well, a doctor cures people. A medic just makes them more comfortable.. while they die.

Church: It's settled then. Your name is now Doc.

Background goes grayscale and DuFresne slides further to the foreground while DOC slides across behind him, with dramatic music playing.

Church: Now get over to Caboose, and help him hold that position.

Church: Well then just get over there and yell "bang bang bang".

Doc: Eh, I don't know. Even that sounds pretty aggressive.

Doc: Besides, I'm not supposed to get involved unless someone gets hurt.

Church turns toward Caboose and very deliberately raises his gun, then fires one shot.

Church: Well, looks like Caboose has hurt himself. Maybe you should get over there and help him, Doc.

Doc: You know, you could have just asked nicely.

Zoom to the Reds.

Simmons: Ah crap, I'm out. Give me some ammunition, Grif.

Grif: Me? I don't have any extra. I'm down to one bullet.

Simmons: Wha- How can that be? You're the one who carries all the extra rounds in to battle.

Grif: Wait, since when?

Simmons: Since the last staff meeting.

Grif: We actually talk about stuff in those things? I just fall asleep inside my helmet.

Simmons: Well, you missed your job assignment, and now we have no ammo.

Simmons: Me? I'm the Social Chairman.

Sarge: Grif. Me and Treasurer Donut are empty. We need some clips.

Simmons: Hey Grif, you remember that one bullet you have left? I thought of the perfect way you can use it.

Zoom to Doc and Caboose.

Caboose: Ah, left. Let's see, that makes an L with this thumb and...

Doc: I'm just gonna assume it's the bleeding one.

Caboose: Yeah, the red one. Aeh. I can't believe Church shot me.

Doc: You have a bullet wound in the foot. Is anything else wrong?

Caboose: Uh... Oh, I got one. Uh, well, sometimes when I fall asleep at night I think about my parents having sex, and I get really really mad for some reason.

Zoom to Tucker and Church.

Sarge: Hey, Blues! We are giving you a chance to surrender! 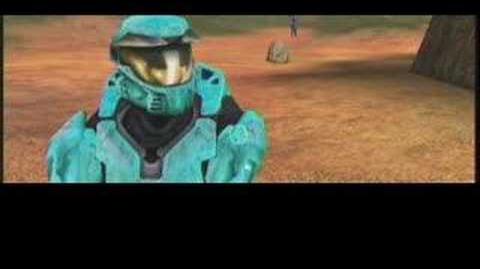 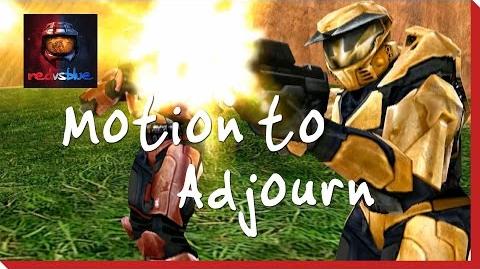 Motion to Adjourn - Episode 21 - Red vs. Blue Season 2
Remastered
Add a photo to this gallery
Retrieved from "https://rvb.fandom.com/wiki/Motion_to_Adjourn?oldid=128781"
Community content is available under CC-BY-SA unless otherwise noted.