Mid-Game Substitution is the twelfth episode of Red vs. Blue: Season 9 and the 185th episode overall.

Simmons awakens from his recent electrocution. He sees Lopez who has spray painted most of his armor maroon and begins to question why he sees himself. Lopez tries to explain he needs to take Simmons place in order to be able to examine the earthquakes but Simmons believes its just because Lopez wants to take his place.

Meanwhile, Grif tries to convince Sarge that more breaks will make the team more efficient. Lopez comes up to them and begins to speak to them. Grif and Simmons just believe its Simmons and while they think he sounds weird they do nothing about it. They ask him what hes been up to and he says urinating and solving math problems wrong. He tells them he will check on the equipment and goes in the base.

At Blue base, the Blues are complaining about Tex's flash bang. Tex tells them the difference between a flash bang and a grenade, while Tucker asks Church if she's his girlfriend. He says yes and makes the greetings. He asks Tex why she threw the flash bang to which she replies that she needed to evaluate the situation. She was told that one man was dead, but when she got to the canyon she just saw the three yelling. While they complain about the flash bang Tex tells them its non lethal. She then asks who died. Tucker begins to tell her they made a mistake but Church interrupts quickly telling her they buried him and took his name off the roster so she would stay. She questions why they took him off the roster and asks for a name. They reply with Andersmith and then say he was too young to die.

Back at Red base, Donut runs up to talk to Grif. Grif tells Donut he and "Simmons" are running some experiments. When he mentions "Simmons" is using new toys Donut goes up to see for himself. We then see the real Simmons in the cave trying to break out of his shackle. He does so and comments that he does talk to himself aloud allot.

Afterwards, Tex is seen atop a hill calling Command, with the Blues are watching her nearby. Church decides the best way to have her stay is investigating Andersmith's death. Caboose mourns for Andersmith, but gets yelled at by Tucker and Church. The three get into another argument, until Tex finishes her call. Tex tells them that she'll stay until they deal with Andersmith. When Caboose asks how they'll do that Tex replies that they will "even" the teams.

Fade inside of the cave where Lopez is standing in front of Simmons. His armor is maroon with a brown trim. Simmons wakes up, chained to a stone ball.

Simmons: (moans) Ugh, why is my body speaking Spanish? Oh no, did I go to Mexican heaven by mistake? That's like white people hell.

Lopez: No. Reemplazándote es la única manera de que obtenga acceso al equipo que requiero para estudiar estos terremotos.[No. Replacing you is the only way I can get access to the equipment I need to research these quakes.]

Simmons: I knew it! You just wanted to become super popular so you take my place!

Lopez: No tendría que ser súper popular para hacer eso.[I wouldn't need to be super popular to do that.]

Simmons: You're gonna regret this Lopez.

Simmons: (yelling) We'll all regret this!

Cut to Sarge and Grif atop Red base.

Sarge: I still don't understand, how does more breaks make us more efficient?

Grif: It's simple, if we have less hours to do work, we got more done in less time. It's all ratios.

Sarge: Simmons, where in Sam hell have you been?

Sarge: Yeah, almost like he's speaking a foreign language, but he's speaking very slowly and clearly, so I understand what he means.

Sarge: What have you been up to?

Sarge: I didn't understand that one.

Grif: Me neither, but boring is always a safe bet with Simmons.

Lopez: Por favor discúlpenme.Debo revisar algunos equipos.[Please excuse me. I need to check out some equipment.]

Sarge: Good luck at whatever you're doing.

Lopez leaves and goes inside the Red base. Cut to Blue base where Tex meets up with Church, Tucker, and Caboose, who are all disoriented.

Tucker: Man, my head should only hurt this much if I had more fun the night before.

Tucker: Ow, Caboose! Stop yelling! Someone get me an aspirin.

Tex: You guys are babies.

Church: Babies? You chucked a grenade at us you stupid bitch. What do you expect?

Tex: Hey, there's a big difference between a flashbang and a grenade.

Tex: Well, if I threw a grenade at you, I wouldn't have to have this stupid conversation right now. I would just be stepping over some disgusting puddles.

Tucker: (to Church) This is your girlfriend I take it?

Caboose: (yelling) Are people meeting other people?! I want to meet people!

Tucker: No you don't, and stop yelling.

Church: You know, why would you attack us? Aren't you coming all the way out here to help us?

Tex: Hey, I needed to evaluate the situation. I heard someone was dead, I show up here and three idiots are standing around arguing. I'm not walking into that blind.

Tucker: So you made us blind?

Church: So what! That's wha- is that supposed to make us feel better? A kick in the balls would be non-lethal too.

Tex: That depends on who does the kicking.

Tucker: Is that a threat?

Tex: Heh, how 'bout we call it an experiment. See what happens.

Tucker: How about we agree to disagree.

Tucker: Oh nobody. We just made a mistake. We thought-

Church: (coughs) Uhh, we thought we should bury our dead teammate and then take his name off the roster so that no one could prove he was never here.

Church: Yes, because that's what she is here to investigate Tucker. And if that guy didn't exist, why would she stick around?

Tucker: (plays along) Oh right. Yeah, I thought she meant some other nonexistent guy, who didn't die. Not the one guy who did die.

Church: Uhh, I don't know. Seemed appropriate at the time. You know it's like a respect thing.

Tex: What was his name?

Tex: Well was it Anderson or Smith?

Caboose: Ohh, Mr. Andersmith, I'll always miss you! You were too young to die.

Cut to Red Base where Grif is seen standing on a hill, Donut walks up next to him.

Grif: Yeah, we're working on some equipment together.

Grif: Yeah. He went up the hill, he said he needed my help, so I said, "No problem. I'll be there in a few minutes."

Donut: When was that?

Grif: About 5 hours ago.

Grif: Well, he hasn't asked for help again, which means I haven't had to think of a new excuse, so, I'd say it's going great!

Grif: I dunno. He's got some new toys or something up there, I guess he's testing them out.

Donut: "Toys" is a broad term Grif. It can mean a lot of things.

Donut: I think I'll go check this out for myself.

Grif: You do that.

Cut to the cave where Simmons attempts to escape from his chains.

Simmons: (struggling) If I could just riddle free a... little..., maybe I can... loosen... this! (Unchains himself) There, I'm free! Now to take my place on Red Team again.

Simmons: Man, Lopez was right, I do say my thoughts out loud a lot. I wonder why I do that? I'm still doing it! I really should try to stop. Okay, that was the last one. Hey I did it! No, I mean-

Radio sounds. Cut to Blue Base where Tex is standing on a hill, talking on her radio.

Tex: Command, do you read me? This is Freelancer Tex reporting in.

Vic: (over radio) Roger that señorita! We read you loud and clarita! How you doing?

Shift to Church, Tucker, & Caboose, all watching Tex from afar.

Church: Okay, I just need to make sure she sticks around for a little while. You know, so I can... talk to her a little bit more; and investigating this dead guy, is gonna be a good distraction.

Tucker: It doesn't bother you that you made up a guy out of nowhere, and then killed that guy, just to have a chance to talk to your girlfriend?

Tucker: Dude, you seriously got to look into this "stalker" thing.

Caboose: I miss him.

Church: You miss who?

Caboose: Andersmith. He's a reminder of how close we all are just to not being here one day.

Tucker: He wasn't here any days, idiot. He doesn't exist!

Caboose: Oh how could you say that? (quietly) Don't you believe in the afterlife?

Church: Wha-? Afterlife implies life at some point. He didn't have one.

Caboose: (sobbing) Because he was so young. He had hopes and dreams.

Church: He was a dream.

Church: Caboose, he didn't exist. You never knew anyone named Andersmith. None of us did.

Caboose: Denial is an important stage in grieving.

Church: Yeah, apparently denial is an important part of reality too.

Tucker: Yeah, take it from the guy who calls that chick his girlfriend.

Cut back to Tex on hill, talking on her radio.

Tex: Roger that. Over and out Command.

Tex turns off her radio and begins heading towards the others.

Church: Oh shit, she's done with her call! (panciking) Quick... uh, talk about something else! Uhhmm...?!

Church: (panicking) Anything! Anything! Uhh... uh, okay! Uh, you know what, I think you're right Tucker! Cows can't talk, but maybe they can't talk because no one ever taught 'em how to do that. Right?

Tucker: That might have been the worst ad-lib ever.

Caboose: You just blew my mind with the cow thing.

Tex walks up to the three.

Tex: Alright, here's the deal: I'm gonna stick around until we get this "dead guy thing" solved.

Tex: Oh we're not. We're gonna even the teams. Come on, let's go up the hill and kill one of the Reds. Then I could get out of this mud puddle.

Tex: Hey, I'll even let you pick which one. Come on let's go.

Tucker: We could always just eat the Red we kill. Hey Church, pick the fat guy! 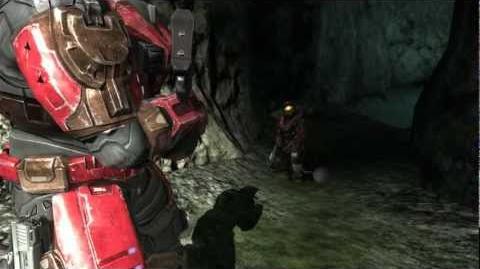 Retrieved from "https://rvb.fandom.com/wiki/Mid-Game_Substitution?oldid=139639"
Community content is available under CC-BY-SA unless otherwise noted.