Me, Myself and You is the thirteenth episode of the second season and the thirty-second of The Blood Gulch Chronicles.

In Caboose's Mind, Church and Tex meet Caboose's mental image versions of Tucker and himself. However, they are both quite different to their real life counterparts, which doesn't help Church and Tex's search. Caboose believes he has seen O'Malley, and suggests that they speak to the Reds.

Outside in Blood Gulch, Sheila, Tucker, and Lopez continue the drive to Red Base. Tucker has no idea how to drive Sheila, and Lopez is too nervous to drive her. Donut continues to retrace his steps (in horrifying detail), and Grif sees Sheila approaching. Tucker, not knowing how to stop Sheila, asks her for help. She tells him to "Retard the controller" which Tucker assumes is an insult. As the episode ends, Sheila continually says "Retard".

Church and Tex inside Caboose's head, with mental images of Caboose and Tucker

Caboose: I see, so you're from the outside. That's where the other is from as well.

Church: The other? Wait you mean O'Malley? Have you seen him?

Mental image of Church: Of course he's seen him, you idiot! You think Mister Caboose would miss something like that, you skeezy douche bag fuck?!

Church: Alright, hold on a second. Who the hell are you?

Church: (whispering to Tex) This guy is kind of an asshole.

Mental image of Church: And I'm Caboose's best friend, so don't get any ideas about kissing up, you lip licking fuck suck!

Church: Okay, there's a lot of stuff in that sentence that I didn't like.

Caboose: If you want to find O'Malley, I suggest we talk to the reds first. He tried to recruit them against me early on.

Church: The reds? The reds are in here?

Cut to the real world. Grif and Donut next to the sideways jeep

Grif: Are you sure you left the part in there?

Grif: (sighs) Alright, lets retrace your steps. You said it was the Tuesday before Simmons and Sarge got blown up that you were last in the Warthog, right?

Donut: Right. I know it was Tuesday because that's the day I wash my underwear. And since I don't like letting my armor touch my bare skin, on account of I chafe real easily, I remember thinking "Where can I hang out with no pants on?"

Tucker: Okay well, looks like we're close enough. Now if I could just find the brakes on this thing. Ah, it must be this button.

Sheila: Do not touch that button.

Tucker: Oh, sorry. Hmm, maybe it's this one.

Sheila: Do not touch me.

Tucker: You know, for a girl your size, you're kinda sensitive.

Back to the reds

Grif: I cannot take anymore of this.

Donut: So after I clipped my toenails, I was gonna apply the ointment as recommended. But I don't know, it just smelled really funny. So, I decided to taste it, just to make sure it was safe.

Grif: That's it! I'm committing suicide. (he runs off)

Donut: Hey! I didn't finish retracing my steps yet. You don't even know what I did about the boil on my thigh.

Grif: (stops and looks off into the distance) Oh crap!

Donut: Hey you're back! So where was I? Oh yeah, I lanced it. Disgusting! (makes creeped out noises)

Grif: Not now, rookie! There's a giant tank out there that's about to steamroll right over us!

Donut: What?! (he hops up and down to see over the jeep and sees Sheila approaching) Oh God it's true! I'm totally freaking out! I'm freaking out! (he runs around in circles)

Cut to the blues approaching

Tucker: Oh my God. I can't believe Caboose is smart enough to drive this thing and I'm not! Sheila how the fuck do I slow you down?

Tucker: What throttle? This throttle?

Tucker: You mean this thing? What're you talking about, I'm so confused!

Tucker: Hey that's kinda insulting. (Sheila repeats the word "retard" over and over as they approach Red base) Oh, come on. Now you're just being mean. 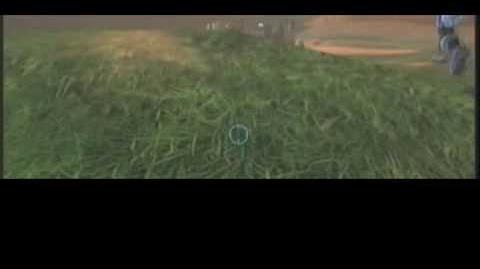 Me, Myself and You
Original 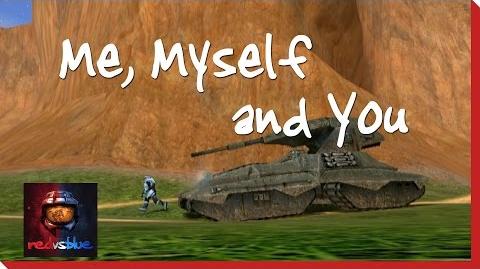 Me, Myself and You - Episode 32 - Red vs. Blue Season 2
Remastered
Add a photo to this gallery
Retrieved from "https://rvb.fandom.com/wiki/Me,_Myself_and_You?oldid=141004"
Community content is available under CC-BY-SA unless otherwise noted.