"I'm here whenever you need me, sir!"
—Matthews to Grif in You Know Who We Are

Matthews is a New Republic rebel soldier on Grif's gold team, first making a vocal appearance in a Season 12 sponsor journal entry and later a physical appearance in Oh Captains, My Captains.

In Teaming with Problems, Matthews attempts to convince Grif to let him join the latter on a rescue mission. However, Grif refuses and chooses Bitters instead, describing Matthews as a being a kiss-ass, saddening Matthews. However, he soon spies on the meeting, much to Grif's displeasure. When Grif berates Bitters for eating his jelly cream pie, Matthews defends his comrade, resulting in Grif calling him Simmons to the group's confusion. After the Blood Gulch Crew decide to leave early without the recruits so they aren't put into danger, Matthews discovers they have taken two warthogs when Bitters asks if he has seen them.

Later on, the rebels learn of the Reds and Blues' supposed "deaths", prompting Kimball to lead the New Republic to Armonia and launch a final attack on the Feds. However, during the battle at the capital, both armies witness Felix confessing the Space Pirates' involvement in the war through numerous television screens. This results in a cease fire between the armies, who find the Blood Gulch Crew at a radio jammer station. Regrouping at the New Republic Headquarters, Matthews joyfully reunites with Grif, much to the latter's disappointment.

A month later, at Armonia, Matthews thanks Grif for his actions at the radio jammer for the 57th time. Grif gets exasperated and asks him for Kimball's location, in which Matthews comments that the armory was where he last saw her. Upon hearing this, Grif immediately walks out on him. He is later seen in All or Nothing with the rest of the Rebels and Feds at Crash Site Bravo, mourning over the loss of Armonia and General Doyle after Charon's assault. In retaliation, the New Republic and Federal Army set aside their differences, arm themselves with alien weapons, and make one final push against the Space Pirates at the Communication Temple. There he saved a Gunman Fed by using one of the alien vehicles, but completely loses control of it afterwards.

After the Blood Gulch Crew broadcast their message across the galaxy, Chairman Hargrove arrives at Chorus and releases numerous Mantises. Matthews manages to destroy one on his own but another hits him and destroys his Ghost, leaving him injured. Fortunately, Dr. Grey aids him. After the Blood Gulch Crew shuts down the droids, Matthews, the lieutenants, Dr. Grey, Kimball, and the Freelancers fly to the Staff of Charon to evac the Reds and Blues, with Dr. Grey taking care of the injured Matthews.

Matthews seems to be extremely loyal to Grif, infiltrating the mess hall to retrieve a bacon burrito for him and then proceeding to look through Simmons' private files with him, in Journal Entry 002. In Teaming with Problems, it is shown that Matthews sucks up to Grif, which the latter dislikes, and tries to please him in order to join him on a mission. However, he's quite considerate to others and is willing to stand up to Grif when he begins to act out of line, showing he will put his foot down when it comes to his team.

Matthews is also brave and somewhat overly-enthusiastic, seemingly wanting to engage in battle in order to prove himself to his peers. This is prominently shown when Matthews destroys a Mantis in The End and chooses to act as evac for the Reds and Blues while heavily injured, alongside the other lieutenants, Dr. Grey, Kimball, Wash, and Carolina. 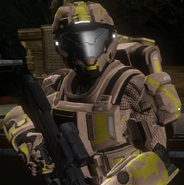 Retrieved from "https://rvb.fandom.com/wiki/Matthews?oldid=144126"
Community content is available under CC-BY-SA unless otherwise noted.