Make Your Time is the fifth episode of the third season and the forty-third of The Blood Gulch Chronicles.

O'Malley activates Lopez's "secret weapon," a weather control device that Sarge had almost finished. The Red and Blue Teams join forces to confront O'Malley, who begins to wreak havoc with his rocket launcher. Simmons manages to teleport the Battle Creek Zealots to Sidewinder and convinces them to attack and defeat O'Malley. Lightning from Lopez's weather device hits Church, thereby damaging the bomb in his body.

When Sarge is subsequently unable to disable the bomb, Tucker tries to destroy Church with O'Malley's rocket launcher before Church explodes, but Wyoming snipes the launcher out of Tucker's hand. The bomb explodes and, due to the damage received from the lightning, destroys the present as well, sending both teams (except Church) to the future Halo 2. Donut attempts to direct a play to explain this sequence of events to Tucker. The group reasons that they were blown into the future because they were standing in front of Church; Tucker deduces that Church must have been blown into the past. Meanwhile, on a Marathon 2 map, Church appears, wondering what has happened.

Fade in on Doc (O'Malley) standing on an icy precipice.

O'Malley: Hahahahahahahahaha. You fools have fallen right in to my hands. Only now, do you realise the folly of your follies, hahaha. Prepare for an oblivion, for which there is no preparation! (evil laugh)

Simmons: O'Malley! The Reds and Blues are working together now! You can't hope to beat us.

O'Malley: You fool! My metallic friend is the only ally I need. Lopez, activate weather control routines.

Lightning shoots out of Lopez, and he becomes surrounded in what look like spinning mystic runes.

Simmons: Are those runic symbols a sign of some ancient technology?

Doc: No, I used to draw them on my binder during study hall. I always wanted to use them for something. Aren't they cool?

Sarge: Oh, Samson's back hair. They found our secret weapon. I developed a weather control device, but I was missing one critical piece of technology to make it work.

O'Malley: Hahaha yes. And now that I've located those "D" batteries, the Universe will be mine! Hahahahaha!

Tucker: Are you serious? You couldn't find D batteries.

Sarge: Only at gas stations, and they're just so darn expensive there.

Church runs up to everyone, still ticking.

Sarge: You want the long version or the short? Basically you've got a fifty megaton bomb in your gut-

Sarge: And Lopez is about to kill us all.

Grif is running up behind Church.

Church: That didn't make any sense, what's the long version?

Tucker: That was the long version. The short version is "we're boned."

Simmons: Hey Grif, are you okay?

Simmons: Hard time? We were only separated for five hours.

Grif: Time moves slower on the inside, Simmons. It seemed like seven or eight hours to me.

O'Malley fires a rocket overhead that lands behind them. They scatter.

O'Malley: You foolish fools will never defeat me! You're far too busy being foolish! Ha! Oblivion is at hand!

Simmons: Sarge. I have an idea, but I need you to distract him.

Sarge: Will do! (turns to Grif, who's hiding behind the rock with him... again) Grif? I've never believed in you. Not even for a moment. But now, is your chance to prove yourself. To me.

Grif: What can I do, Sarge?

Sarge: I need you to run right at O'Malley.

Grif: And shank him with my shiv?

Sarge: No. When he blows you up with the rocket, try to see if you can get your dismembered limbs and guts to clog the barrels of his rocket launcher.

Sarge: It's a remote chance, I know. But it's worth a shot.

O'Malley: (running up to their cozy little rock) Ahhhhblivion is at hand! (evil laugh)

Doc: Cover your ears, guys. This thing is really loud.

Grif: This is it!

Simmons: Not so fast, O'Malley! Maybe we can't stop you, but I know who can!

A teleporter portal randomly appears in the middle of the ground, and the Battle Creek soldiers come pouring out of it.

The Battle Creek soldiers all look at Simmons.

Simmons: He's the one that has it!

The Red Zealot: The crusade has begun! Our hour of glory is now at hand! Let all who would stand against us be washed in our divine light!

The Battle Creek soldiers start attacking the hell out of O'Malley.

Church: (getting hit by lightning from Lopez) Yow, whoohoohoo!

Church: Don't you ever install anything above the waist?

Sarge: Oh no! That last lightning bolt fused the detonator! There's no way to turn this thing off.

Simmons: Can you do it manually?

Sarge: Impossible. I specifically designed it so that I wouldn't be able to defuse it.

Sarge: In case I fell in to the wrong hands, and was brainwashed to help the blues.

Grif: You had to get just one last asskiss in before we die, didn't you.

Cut to the Battle Creek soldiers humping the fallen O'Malley.

Another Red Soldier: Take that dude!

Tucker: (pulling out a rocket launcher) Church, there's only one thing I can do.

Church: Hehey, what the hell?

Tucker: If I blow you up before the bomb goes off, there's at least a small chance the rest of us will live.

Church: But the rocket'll kill me.

Grif: You're gonna die anyway when the bomb goes off!

Church: What can I tell ya pal, misery loves company.

The rocket launcher is shot right out of Tucker's hands.

Tucker: What the hell!?

Cut to Wyoming on an icy peak.

Simmons: Uh guys, I hate to interrupt, but... zero seconds.

Cut to the ringworld halo exploding in a huge white blast that shoots all the way across space. The screen goes white, and a loud ringing beep is audible, shortly to be replaced by a warbling sound as it fades in to a black and white spiral sort of pattern, with the reds and the blues sans Church floating in front of it.

Sarge: The bomb must have gone off.

Grif: Where are we? Are we dead?

Donut: Dead, oh man. Tomorrow was all you can eat day at the chow hall. And I wanted to eat all that I could.

The spiral pattern is replaced with a stars pattern, still rotating.

Sarge: We're not dead, idiots. We're stuck in some kind of temporal... whoa no! Heads up boys, prepare for impact!

Screen goes white, then fades in to a shot of the sky with a different targetting reticle.

Donut emerges in shiny new pink armor that looks different than before.

Grif: I still wanna know why I don't get a laser gun.

Simmons: Huh? Hey hey hey, take it easy Tucker, you've been out a while.

Grif: And I thought I was lazy.

Tucker: What's going on? Who are you people?

Donut: He has amnesia! Tucker. Don't worry. You are safe. We're the reds, we are your mortal enemies. Wait. That didn't sound right.

Caboose: Tucker! Tucker! I am so glad you are alive.

Tucker: Caboose? Still so dumb, but you look so different.

Caboose: We're in the future! Things are very shiny here.

Tucker: The future? Oh I can't fucking wait to hear this one.

Sarge: Obviously Lopez's weather matrix combined with the power of bomb 21 combined to create an explosion so large, it caused a temporal rift in time, that cascaded throughout the blo-

Donut: Sarge! Can we do the skit now?

Grif: I don't wanna do that dumb skit.

Sarge: Fine. But only because I wanna see Grif be miserable. I miss the old days.

Everyone scatters off screen.

Sarge: Can we just start?

Sarge: I am the past, where things cost less, and people knew the value of a hard day's work. But they only lived to be twenty-eight years old.

Simmons: And I am the future, where people have no morals and no emotions but we have a bunch of kickass gadgets.

Grif: And I'm the present, which sucks. We have nothing cool, and also no morals.

Donut: And I am the helpful narrator. A faceless voice used by poor writers.

Donut: Shut up, audience. You're ruining my play. Everything was fine in the timeline, until one day, in the present...

Grif: Why does bad stuff always happen in the present?

Donut: Because that's when people do stuff.

Sarge: Ah, quit yer bitching. I have atrocities and a crapload of wars seemed very important at the time, but now seem trivial and stupid.

Simmons: Yeah and I've got apocalypse. That's way worse than anything you two dipshits have.

Simmons: Sorry Sir, that "dipshit" was in character.

Donut: One day, in the present, a terrible thing happened.

Grif: Don't do that, stupid Private Tucker. That might kill me.

Caboose: Thinks about this, for a moment.

Caboose: You told me I was supposed to read anything with my name in front of it.

Donut: Just the lines, not the blocking. You're ruining my big debut!

Caboose: I do not think we are meshing, artistically. I think you should talk to my agent.

Grif: This is stupid, I quit.

Donut: You can't quit! End scene! This has been a Franklin Donut joint.

Sarge: Listen, son. You and your buddy Church set off a bomb, which when combined with the weather machinery in Lopez, made an explosion so large it destroyed the present.

Tucker: Destroyed the present, then where are we?

Simmons: We're in the future, numbnuts.

Simmons: Unbelievable, he can't cope with the loss. He's in denial.

Grif: That is so sad.

Sarge: Son, you're just not listenin'. The present has been destroyed. It no longer exists. We are in the future.

Tucker: Ah-ho, it makes no sense!

Donut: I'm currently working on a short film to explain it. Tom Cruise has the script, and I hear he's veeery interested.

Tucker: You're telling me a bomb sent us in to the future.

Simmons: Yeah, you see luckily Church was facing forward when the bomb went off, and we were standing in front of him? So that sent us forward in to the future.

Tucker: Of course he was facing forward. What other way can people face?

Simmons: You see? That's what I meant by luckily.

Tucker: What happened to Church?

Sarge: Sounds good to me, let's go with that.

Tucker: He could be hurt, and trapped in the present.

Tucker: Don't you see? If Church was facing forward during the explosion, and that blew us in to the future, that could mean that he was blown backward in to the... oh no!

Sarge: Backwards in to what? A wall? A broom closet?

Tucker: No! In to the past!

Cut to Church, in all his sixteen-color goodness.

Church: What the hell? Where the hell am I? 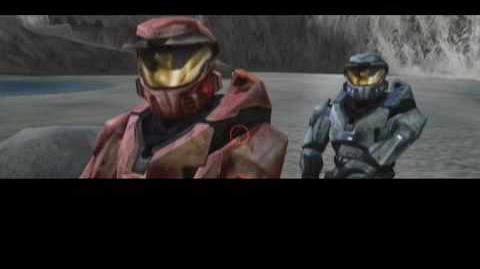 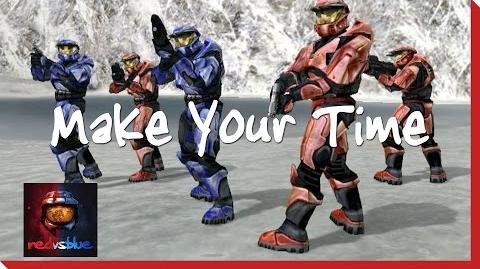 Make Your Time - Episode 43 - Red vs. Blue Season 3
Remastered
Add a photo to this gallery
Retrieved from "https://rvb.fandom.com/wiki/Make_Your_Time?oldid=135632"
Community content is available under CC-BY-SA unless otherwise noted.