"You know these things aren’t as effective as they used to be."
—Sarge in Upon Further Review

The Magnum, (M6 series) is a handgun that is featured in all of the Halo games, in one form or another. It's commonly used to "represent" the characters talking to one another in the series, but has been used in other ways as well.

In scenes filmed in Halo: Combat Evolved, characters are usually shown wielding the Magnum as the gun lowering technique known as "Alert carry". Any other weapon would look too aggressive in passive situations. With Machinima in mind, the programmers of Halo 2 decided to implement gun lowering into the game, allowing the characters to be holding most weapons without looking too aggressive. Adding onto that, almost all sorts of civilian characters that are presented in the Halo engines (especially in the later seasons and their respective games) almost always carry around a magnum. Such examples being Dylan Andrews, Jax Jonez and many more.

In scenes filmed in other games, the Magnum is most often the secondary weapon of many characters, but is the main weapon of Sister, Carolina, and C.T. It is also commonly used in scenes in which characters are not supposed to wield weapons such as when being disarmed or taken prisoner/hostage, which is referred to when Sarge tries to hold onto his pistol when Washington orders him to drop his weapons.

The Magnum is a standard issue sidearm for Red and Blue armies. It is also used by members of Project Freelancer, UNSC, The Insurrectionists and more. One of the project's training battles included the use of Magnums, with rounds filled with paralyzing paint loaded into magazines and into the Magnums. Some characters have also dual-wield magnum pistols such as Tex, Girlie, C.T. and Donut, although these are usually done in animated sequences.

CT on alert with her dual Magnum pistols drawn. 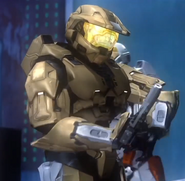 Tex using York's Magnum against him

Tex and Carolina aiming their pistols

Tex about to shoot CT

Locus about to execute the Dropship Pilot

Temple with his Tactical Magnum

Wash aiming his Magnum at Genkins without even looking.