Lost in Triangulation is the fifth episode of the fourth season and the sixty-second of The Blood Gulch Chronicles.

At the Zanzibar fortress, Church asks Gary whether he can translate the Alien's speech for them. Gary reveals the alien's race was his creator, but unfortunately he knows virtually nothing about the race because he was programmed entirely with knowledge of the Shisnos. The Blues continue trying to translate what the alien is saying, and eventually reach the conclusion that the Alien's name might be "Honk Honk." Church even believes that he figured out that blarg means yes in the alien's language, though Tex argues that it could also mean no.

Meanwhile, at Blood Gulch, the Reds continue Sarge's right-hand-man contest, which Donut ultimately wins. Simmons has become despondent and suicidal, and Sheila (whom Simmons believes is a figment of his imagination) tries to cheer him up by leading him back to her home, a reconstructed Blue Base. Sheila reveals that she has lost many of her memories due to circuit degradation over the years. She knows that her final mission was to protect Blue Base from the enemy of the Blues, and though she has forgotten their identity, she vaguely remembers it was an army of a different soldiers in different color armor. Simmons, immediately realizing that his life is in danger, unsuccessfully tries to convince Sheila that the enemy was space pirate cowboy monkey ninjas who were trying to round up some cattle.

Fade in to Sarge in the Gulch

Sarge: Alright dirtbags, after the third round of the competition, it's still anyone's contest.

Sarge: Donut was leading after the obstacle course, and talent contest.

Sarge: But then the mysterious skull pulled ahead during the question and answer session.

Sarge: So the standings are the skull, Donut, and in third the wrench. Which is the current crowd favourite.

Cut to the warthog with pro-wrench propaganda on it

Grif: Haha, maybe the skull will be your new sidekick. Hey Sarge, how can I kiss your ass if I don't have any lips?

Sarge: And in last place Grif.

Grif: What? I thought I was ineligible.

Sarge: Ineligible to win, dead man. Luckily there's no chance of that happening since the last round is the evening-wear competition.

Grif: Then can I quit?

Sarge: Course not, only eligible contestants can withdraw from the competition.

Sarge: I guess you'll just have to settle for fifth place turdbelly.

Grif: Fifth place? Should I even ask who's in fourth?

Sarge: I'm reserving fourth place for any late entries, who would obviously be better than you. Such as a turd, or a turd farmer.

Cut to Church talking to Gary

Church: Hey Gary, is there any way that you could translate what this big alien is saying to us?

Church: Aw come on man, isn't this one of the aliens that built you?

Gary: yes, but i do not know much about those creatures. i was only programmed with knowledge of the shisnos. i mean you.

Church: Yeah listen man, that word is really startin' to bug me a little bit.

Gary: you did not even know what it meant until i told you.

Church: I know but you just say it so much.

Gary: i only say shisno in context. like when talking to a shisno or about a shisno. i think i see what you mean shisno.

Gary: inter-species prejudices take a long time to overcome. but i will try.

Gary: luckily, i am not lazy like a shisno.

Church: Yeah it's pretty clear you mean to give this your best effort.

Gary: i think the important thing is that i am trying.

Cut to Church wandering the halls or something

Tucker: Okay. Church, is trying to get a translator. So that we can talk to each other.

Tucker: What? I'm talking to Caboose.

Caboose: Do you need a blanket? Tucker, do you want some hot dogs in a blanket?

Tucker: Dammit no, Caboose I'm not cold, I don't want a hot dog, and if you put mustard in my fucking sheets again I'm gonna kill you.

Caboose: Okay gargantuan alien, now that we have decided to keep you, you need a real name. I vote for Fluffy.

Caboose: Fluffy! The alien that only loves!

Tucker: He's got to have a name. Why don't we just ask him? Hey alien dude, what's your name? Name. I am Tucker. This is Church. That's Bitch-pants McCrabby.

Tucker: Well that's what we call you.

Caboose: Not me, I call you Mrs. McCrabby.

Church: What, is your name?

Tucker: Just keep repeating it Church, I'm sure he'll come up with the right definition on his own.

Church: He is Tucker. Tucker. You are?

Church: Okay, I give up, all this guy says is honk honk.

Tex: Well have you ever considered the fact that his name is Honk Honk?

Tucker: Do you have any idea how stupid that sounds?

Church: Hyeah, I mean seriously, what kind of name is Honk Honk?

Tex: Yeah, unless blarg means no. In which case, he just said no, blarg does not mean yes.

Church: What, no way. Hey alien, am I right?

Church: Haha, see? The fuck do you know.

Sarge: After the final tabulations, we've declared a winner! Grif, the envelope please.

Grif: Envelope? We don't have any envelopes, this is the army.

Simmons: Well, my life's officially over. Time to go kill myself.

Sheila: Wait for me!

Simmons: Look, no offense imaginary tank, but I don't believe in you. You're just a product of my imagination.

Sheila: Actually, I'm a product of the military contractor that made the lowest bid. I'm a little ashamed of that.

Simmons: Well leave me alone, I can't have some imaginary tank ruining my excellent reputation. Now if you'll excuse me, I need to go dig a hole to live in.

Simmons runs off a little bit

Simmons: (sigh) I wish Grif was here. I could convince him there was food in the ground, then he would dig half the hole for me. Or, maybe a third of a hole. Then he'd use the shovel to eat oatmeal. On second thought I don't wish Grif was here.

Sheila: You can live with me.

Simmons: Just ignore it, it's not real.

Sheila: I have my own base. In fact, I've made lots of renovations since you all left. See?

Simmons turns to see Blue Base

Sheila: Yes! I was sent to guard it from something. I can't really remember what... some of my memory banks have failed over the years. Do you remember what the Blues were fighting?

Simmons: Uuuuuuh I think it was pirates.

Sheila: Are you sure? I think it was another army. I think they were a different colour.

Simmons: No, it was definitely pirates.

Simmons: Yeah, pirates. And, I think there were some ninjas that were working with them.

Sheila: Neaw, I don't think so.

Simmons: And I think they had travelled, from another planet.

Simmons: I think it was called Cowboyland.

Simmons: And they were here to rustle up some cattle.

Simmons: But the Blues were gonna stop'em.

Sheila: My logical data analysis sector indicates that would be highly unlikely. And my bullshit meter agrees. 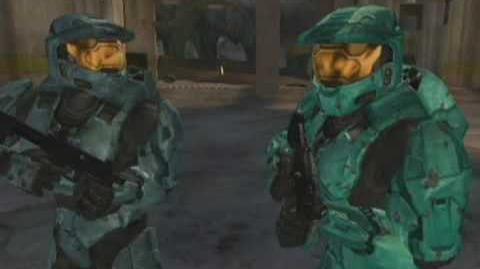 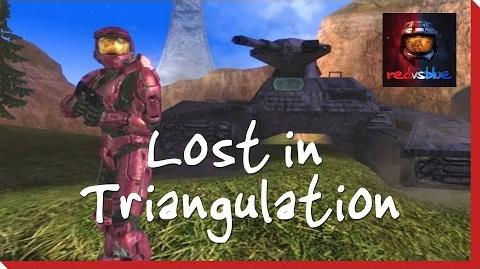 Lost in Triangulation - Episode 62 - Red vs. Blue Season 4
Remastered
Add a photo to this gallery
Retrieved from "https://rvb.fandom.com/wiki/Lost_in_Triangulation?oldid=135648"
Community content is available under CC-BY-SA unless otherwise noted.