Huggins finds herself staring at the giant red sun like object, and wonders if it's the soul of a black hole, but her parents Gerald and Cheryl reveal themselves, as the trio are actually at the start of the universe. Cheryl explains that as light beings, they can't die, and the black hole just brought them to the pre-big bang timeline. Then, the two ask Huggins where her brother, Muggins, is, but she does not know where he could be, so Cheryl suggests that she go into light speed to find him. However, Huggins plans to use it to stop the Reds and Blues from causing the first time paradox.

Back at Blood Gulch, Sister and Doc are outside Blue Base knowing that Tucker is passed out after giving birth to Junior, although Doc is still confused over the paradox idea. Knowing that Tucker would recognize her despite not meeting her until later, Sister decides to play a gag on the former by pretending an alien invasion is occurring, or as an alternative, pretend she was his coma baby that needs money.

Back at the fields, Sarge is still angry how Donut betrayed them for Chrovos, even disbelieving Washington when he reminds them all how Donut saved them from the time limbo. Suddenly, Caboose leaves this timeline to try and fix the space time continuum, shocking both Washington and Sarge as they never told him how to do that. Meanwhile, Tucker comes to, and Sister decides to screw with him by claiming she was him from the future that was full of women, that he was in purgatory due to dying from childbirth, and that Junior is a demon, freaking Tucker out.

Elsewhere, Huggins arrives at Blood Gulch, but has to fast forward to when the Red's and Blue's started living at their bases. While she starts to confront Caboose for having the group make a paradox, she stops herself as she realized she was talking to a past version of the latter, only for Caboose to reveal that he is from the future who knew all of that. While shocked about that, Huggins asked Caboose to talk with her, which agrees if only for an hour as he still has to kill Church.

Back at Blood Gulch, Tucker, believing he was now a phantom, approaches Doc and tells the latter about his fat mother. However, a fed up Donut tells Tucker the truth, restoring Tucker back to normal, and gets pissed at Sister for tricking him. Suddenly, Doc has his memories back, confirming that he did not die after his fight against Donut as the latter thought. With everybody's memories back, Donut lets loose and berates his teammates for calling him a traitor, thinking they were better than him for having pink armor, belittling him, shooting him, and not even caring about him dying or taking interest in his mission. After, Donut says that after he teaches them how to time travel, he was leaving, causing Washington to order everybody to go after Donut and apologize to him.

Episode opens with Huggins at the beginning of time staring at the giant ball of energy.

HUGGINS: That's a big uhh... Is this the heart of a black hole? Hard to belive one of these things killed my parents...er, it has a heart? Can a black hole love?

HUGGINS' MOTHER: Mom? That's a name I haven't heard in a long time!

HUGGINS MOTHER: What? Sweetie, we can't die. Light is information and cannot be destroyed.

HUGGINS' MOTHER: Black holes are like, drains that feed the cosmos all the way back to here. It lets the universe umm...loop.

CHERYL: Oh sweetie,I didn't blow your mind, did I?

GERALD: Where's your brother? He should be here.

HUGGINS: Muggins? I dunno. One of the Cosmic Powers trapped me here! Remember those guys?

CHERYL: Late? The whole universe should be in here! Oh, maybe there's a blockage in the timeline. Gerald, would that do it?

CHERYL: Huggins, you should really check on Muggins.

CHERYL: At lightspeed, you don't experience time. So fly close to light speed and time will accelerate. You can watch galaxies bloom and fade in real time, it's really nice.

GERALD: And Hugs, if there's a blockage in the timeline, you'll get stuck like a spider's web. D'ya know where that might be? Can you think of any paradoxes you might have stirred up?

HUGGINS: Okay! Mom, Dad, I gotta go! I know where that paradox is! Something's crazy wrong!

CHERYL:  So long! Have fun!

Transition to Sister and Doc outside Blue Base in Everwhen Blood Gultch.

SISTER: Okay. Tucker's passed out. You know what that means?

DOC: First, we monitor his condition, so that we can-

SISTER: No, doctor boring! (starts heading into the base) I'll start at the top: someone has to tell Tucker that we caused a paradox and are reliving our old lives.

DOC: I would appreciate an explanation of that actually!

SISTER: However! Tucker is going to wake up and look at me, a person he does not know yet somehow recognizes, and be like: byuh.

DOC: We're not doing that!

SISTER: So, we convince him that aliens are invading!

SISTER: Through his ass!

DOC:  Why would we do that!? There's been enough going on down there already!

DOC: Can we not just give him the care we'd give any new mother!?

SISTER: Oh, I see what you're saying! I'm the child he gave birth to ! "Little coma baby Kai"!

DOC: Ya'know I get the feeling you and Tucker have some unresolved issues.

Sister looms over an unconcious Tucker.

SISTER: Okay, Doc! Just like we practiced: wake him up...

Cut to the Reds putting Donut on "trial" as Washington, Caboose and Sheila watch.

SARGE:  Motion to feed Donut through Sheila's treads for treason!

SARGE: Pleas from a traitor like you are about as significant as whatever abstract shape I'm gonna grind you into!

SARGE: "Sarge" what? This slice of pink-frosted butt-cake has been on display for too long! The boy's gone stale...

WASHINGTON: Donut saved all of us. You included.

SIMMONS: Did Donut really do that? Donut, did you really...save us all?

DONUT:  Well, I don't know about all that-

SARGE: Boy doesn't even know about it! You heard him!

GRIF: I'm sorry but, dude, you betrayed us! You stole the hammer. What the fuck?

WASHINGTON: We were trapped! Now we're free. We're no longer in a wierd time-limbo and WE OWE DONUT. We owe him big time.

GRIF:  Now can someone please tell me why I'm in Blood Gulch?

CABOOSE: Um, Agent Washington can you field this one please? I am going to go start fixing the timeline. Boop!

Cabooses conciousness phases away and his Everwhen self starts staring at the sun.

WASHINGTON:...Is... Is Caboose a genius?

WASHINGTON: Hmm. Anyway, you heard him. Let's get everyone up to speed. Speaking of everyone, where are they?

Return to Sister and Doc hovering over Tucker.

SISTER: And his life signs?

SISTER: Thank you, sweetpea! (to Tucker) Lavernius, you've been out for some time. How many guns am I holding up?

SISTER: Very good! (to Doc) We're gonna have to put him down.

SISTER:  In THIS economy!? He's delirious.

TUCKER: Don't I know you?

SISTER: Yeah... you do I'm afraid. I was gonna wait until you recovered to tell you this but, Tucker... I'm you!

SISTER: FROM THE FUTURE!

TUCKER: Is this a prank? Sarge!

SISTER: The future is all ladies, all the time. You included. And if you're gonna live to see that promised land, I've gotta rescue you, Tucker. You wanna know why?

SISTER: You are in Puuuurgatooory, Lavernius. And you've gotta break out of Purgatory!

TUCKER: I am not!

TUCKER: What was that?

SISTER: You died in childbirth.

SISTER: No Jesus here! Just you, this here prospective vagina and eternity with the demons, baby boy!

SISTER: You can escape. I can show you how... but you have to trust me.

Huggins girates back and forth at near lightspeed until she sees Caboose below.

Caboose pops up in front of her on the cliff edge.

CABOOSE: Uhh, Hello, um, pardon me? Um we did it to save our friend, Wash. IIII kinda thought you knew that?

CABOOSE: Uh, ya'know cause you went away all mad...?

CABOOSE: You, when we're at the god-place together? In the future...?

HUGGINS: How can you know that!? Ugh... Okay uh, Caboose right?

CABOOSE: Yes, thank you for remembering.

CABOOSE: Time is made of circles, I am familiar with the concept.

HUGGINS: And now you seem to know... the future?

HUGGINS: (rising up level by level) Okay. This is whelmed. This-is-overwhelmed. And this is where my ass is at! (sighs) Can we talk?

TUCKER: Doc! I'm a phantom and I have unfinished business on Earth.

TUCKER: I have to come clean.

TUCKER: I seduced your mother.

TUCKER: You said... I dunno, something I didn't like. So I looked up "Mom" in your phone and... well, ya'know. And then I told everyone she had tits like icing bags. And that she's so fat, that when she walks on the beach, she leaves glass footprints! (laughs)

DOC: ...E-you should go tell everyone else your unfinished business too.

TUCKER: Thanks, man. I'll miss you.

Donut walks by grumbling to himself. Tucker runs up to him.

DONUT: (sullenly) We helped prevent Wash's injury, causing a paradox and now you're trapped in your past. That's Carolina. That's Wash. You should ask yourself how you know them, even though you haven't met them yet.

Donut: Me and Doc betrayed everyone, and no amount of "atonement"-seems-to-fix-it!

Tucker and Doc phase back in, their loops broken.

DOC: Holy moley! I survived falling off a skyscraper!

DONUT: I fought you through time and space!

DONUT: You damn right. Goddamn right it was!

Donut runs over and starts adressing the rest of the group.

DONUT: Alright, you fuckers! Listen up!

Wash, Carolina and the Reds turn to Donut.

DONUT: I have had it with this "traitor" crap! You all think you're better than me cause I have PINK armor!

DONUT: Yeah, I said it! I'm OWNING it! Pink! You put me down, sideline me, leave me to rot, shoot me over and over!

DONUT: And when I die horribly at the hands of some time god and come back with the explicit task of saving your lives! And when I'm the only person, the ONLY person, with ANY interest in preserving the universe while your dumb-asses wander off and break time itself!

DONUT: Shut up! All you can think to do after I fight O'malley across time, space, World War II, the moon and a labyrinth prison inside of a black hole is execute me!?

SARGE: VOTE to execute you!

DONUT: So when I teach you all how to time travel and thwart Genkins, I'm out! Next time you're stuck in your boring-ass lives with your ugly decor and drab fashion sense, cry to some other shisno!

WASHINGTON: (sternly) You are all going after him and apologizing.

The Reds and Blues save for Sarge and Wash take off after Donut grumbling.

SARGE: Did I hear right that I can time travel? 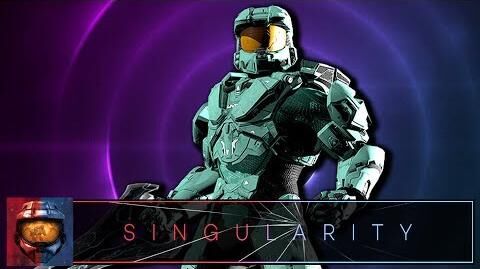 Retrieved from "https://rvb.fandom.com/wiki/Limbo?oldid=146339"
Community content is available under CC-BY-SA unless otherwise noted.