Lights Out is the fourteenth episode of Red vs. Blue: The Shisno Paradox. It aired on July 15, 2018 for FIRST members and July 22, 2018 for the general public. It is the 338th episode overall.

Tucker stands out on the porch of Starseeds and ponders everything that has happened. When Sister later goes there too, he apologizes for what he said to her and how he has been behaving. Sister says she knows how he feels and reveals that back in high school, she was chubby and hated herself for it, and felt she wasn't ready for sex despite all her classmates constantly banging each other, and that Tucker calling her frigid reminds her of back then when she was first called that, she also apologizes for breaking his heart. Tucker tells her he still really likes her but she says that the feeling is no longer mutual after everything he did. Tucker wallows in pity and blames himself for ruining England and Wash's injury, because of how he recklessly charged into battle and he stared straight at him as he got shot.

Tucker and Sister return to the others and tells them his plan to ignore the Cosmic Powers and travel back in time to stop Washington from being shot, everyone else agrees under the mindset of saving one person's life not affecting the timeline, The Cosmic Powers are only against time travel because they are programmed to, nothing they've done already hasn't caused issues and that they can't do anything about Chrovos because Donut stole the Hammer. Huggins, who was spying on them because the Cosmic Powers don't trust them yet, exclaims at this and berates them for this decision saying they will destroy time. They tell her they have no choice and must save their friend. Huggins rushes off with the intent to tell the Cosmic Powers of the Reds and Blues betrayal as Grif sadly bids goodbye to her as she disappears. The Reds and Blues then plan to leave before Huggins warns Atlus On the way she is intercepted by Genkins who questions what she is doing. She tells him about the Reds and Blues betrayal and asks if she can move by. However, Genkins replies that she "must be punished" and opens a mini black hole which sucks Huggins inside, instantly killing her. He remarks afterward "No running in the Halls, remember?"

Genkins approaches the Cosmic Powers and is soon followed by Muggins who tells them that he felt Huggins energy die and that the Reds and Blues are gone. He concludes that she must have saw the Reds and Blues leave and that someone killed her before she could warn them. Suddenly, 3 beings arrive, who Atlus calls The Fates. One of which, named Destiny, prophecies that The end is upon them and no one will live to see the next dawn. Meanwhile, elsewhere, a broken Washington returns to Chorus and the remaining Reds and Blues grab supplies for their plan to prevent Wash from getting shot.

The scene opens on a shot of the Gods’ home floating in space. Zooming in, Tucker appears standing alone on a balcony, leaning on the railing. Kaikaina walks up behind him.

SISTER: Having some quiet, huh?

SISTER: You left it open.

TUCKER: That figures. I am pretty thoughtless.

SISTER: If that's how it's gonna be, man.

TUCKER: Wait. [Turns around.] K, you... I mean... I need to apologize. What I called you was awful. I wanted to cram the words right back into my mouth.

SISTER: [Sighs.] I know you did. [Walks up next to Tucker.] I was... chubby. I mean, I still am but... back when I was a teenager, I didn't love it. In high school, everyone was screwin’ each other, and I wasn't ready, and it's like, you say “frigid,” suddenly I'm in short pants at Wailuku High, hearing it again for the first time.

TUCKER: Man. I just... I had this feeling! And it kept growing! And it was so hard—

SISTER: I'm sorry too. I kinda ate your heart. Looks like we both blurt out dumb things when we feel small.

TUCKER: I really like you. And maybe I went about expressing it the wrong way.

SISTER: I'm not great with feelings, Tucker. ...But yeah. I think I had feelings for you, too.

TUCKER: Yeah. Par for the course. Everything I touch, I—I fuck! I fucked you. I fucked England. I fucked Washington.

TUCKER: I'm being serious here. You don't understand. I'm responsible for his injury. My friend, my mentor! I did this to him!

TUCKER: You weren't there. I rushed in like an idiot, and I got him shot.

SISTER: Oh, were you supposed to babysit the elite killing machine?

SISTER: And what are you gonna do, huh?

SISTER: I'll tell you what you're gonna do, Mister Pity Party. One of two things. You ready? You will either A: do nothing, or B: try and save Wash and risk freeing an all-powerful time god. Not much of a choice, is it?

Cut to Tucker back inside.

TUCKER: We need to go back and save Wash.

TUCKER: Donut has the Hammer! It's out of the game.

CABOOSE: I miss you, Ms. Whack-Man.

TUCKER: We have Chrovos's time guns. And that's something.

GRIF: [Sarcastically.] I feel like... we already had this conversation.

GRIF: [Sarcastic gasp.] Is that the time travel? Deja-vu?

TUCKER: Guys, listen. We don't have to change much. Just a few details.

SISTER: So we ignore the gods.

TUCKER: They're not gods! Just AI.

SIMMONS: All time travel's bad to them. They're programmed against it.

TUCKER: They said that time travel is Jenga. And I'm talking about swapping out one more piece. The most important piece. Delicately.

SARGE: Time travel isn't Jenga! More like... Operation. With a side of Yahtzee. Bingo!

TUCKER: The alternative is to do nothing.

TUCKER: And we’re better than that.

CAROLINA: We'll do it. [Walks up to the group.] If we need justification, we have plenty. Let's start with the past. Your misadventures in history have echoed through the ages. You've caused wars, disasters, abducted historical figures. Compared to all that, what's rescuing one man from one bullet? Let's also think about what Jax said. He used the time machine for months without issues. But let's not stop there! Let's think about the future. If Loco can invent a time machine, then someone else will come along and do the same thing. Retreating from this battle is not a victory. All of these reasons have been running through my head on a loop. But you know what? They're meaningless. David's hurt. We have to go.

SISTER: I get it.

SIMMONS: Actually, sir, Tucker is the one with the plan.

SARGE: Well, now I hate it!

CAROLINA: Tucker, I know you well enough to guess your plan.

TUCKER: That's insulting and sweet all at once. Before we start, we need to be unified in this. Of one mind. You've been awful quiet, Grif.

GRIF: Carolina's right. We have to. He'd go for us in a heartbeat.

HUGGINS: How could you?! [Zipping out from behind the fountain.] Nothing I said got through to you?

HUGGINS: [Indignant.] Well, the gods don't trust you yet. I can't imagine why!

HUGGINS: I understand perfectly well. You Shisno! You're going to ruin everything!

HUGGINS: You know I have to tell Atlus now. You know he's going to bring down this entire castle when he finds out!

HUGGINS: I never should’ve helped you! I'm so frickin’ stupid. [Flies away.]

CAROLINA: We should go. Before she reports what we’re doing.

GRIF: [Staring off past the fountain, sadly.] Bye.

Huggins zips through the hallway alone.

GENKINS: Huggins! Stop! Now, what on Starseat is so important that you're blazing through here like that?

HUGGINS: I have to tell Atlus! The Reds and Blues are going back in time again. It's urgent!

GENKINS: Well now, that is news.

HUGGINS: [Impatiently.] So? Can I go?

GENKINS: Nooot quite, heh heh. After all, you must be punished.

GENKINS: [Draws a large rifle that glows with white light and shoots a brilliant beam into the air, forming what appears to be a black hole.]

The black hole swallows Huggins, and she disappears.

Genkins comes before Atlus and the rest of the gods.

KALIRAMA: We just saw him ten minutes ago. You don't need to say “greetings” every time.

ATLUS: It sounds cool. Back me up, Burnstorm.

GENKINS: Aaaaa stroll? Sweet of you to worry! I was only gone for a... flash. [Chuckles.]

BURNSTORM: Nearly finished. The weapons and armor you requested will be ready by the time the Reds and Blues agree to their mission.

MUGGINS: [Offscreen.] I'm afraid they won't be coming. [Now visible coming up behind Genkins.] My lords and ladies, I bear grave news. The Reds and Blues are gone, and... Huggins... is dead.

BURNSTORM: Why? Who would do such a thing?

MUGGINS: She must have witnessed the Reds and Blues leaving. Someone stopped her from warning us until it was too late.

KALIRAMA: Muggins, I am so sorry.

MUGGINS: As am I. She was my friend. [Continues in voiceover, as we see Wash walking the streets of Chorus alone.] Ironic that friends who we would defend with our lives are so often the ones we hurt. [Over the Reds and Blues preparing their weapons.] We discover our love for them too late, its presence revealed by their absence, their warmth felt as a sudden chill and we are left cold. A friend—she shone as I do, but her truest light was invisible. It was the brightness of her point of view. [Shot lingers on Carolina for a moment.] Like a lighthouse, she guided us toward our saviors, out of danger. And so, hope, snuffed out, was reignited by a single spark. All I know is this: she was my friend.

KALIRAMA: Thank you, Muggins. Well spoken. [Looks at Atlus.] My husband. My King! We must decide what we do next.

ATLUS: Though times seem most desperate, we must not give up hope. Perhaps the Reds and Blues will succeed, against all odds. Perhaps these mortals will prevail.

ATLUS: May she see us through.

KALIRAMA: No! She has come!

[Atlus looks up. Before them, floating in a ball of bright blue-white light, are three mysterious figures dressed in white armor, each with outstretched hands. A closer shot reveals the helmets have no visor, just a plate with four bolts in it that give the impression of a four-eyed face.]

DESTINY: Our dreams have ended. And so the nightmare begins.

DESTINY’S SISTERS: [Singing in eerie harmony.] So we wake... soon all will cease...

DESTINY: The Great Endeavor is lost. All efforts mount to vanity.

KALIRAMA: Is it truly over?

DESTINY: I have seen what remains of the future. The cup is near empty.

ATLUS: Spare your riddles! Tell us of your visions!

DESTINY: All is lost.

DESTINY: Tonight the sun sets. There will be no dawn.

GENKINS: [Rising from his knees.] Smoke ‘em if you got ‘em! 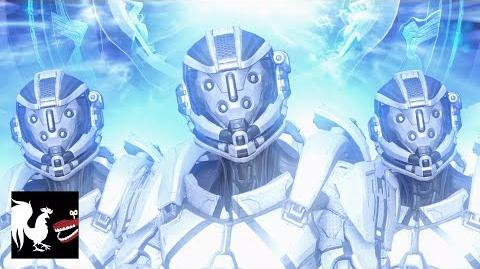 Retrieved from "https://rvb.fandom.com/wiki/Lights_Out?oldid=145758"
Community content is available under CC-BY-SA unless otherwise noted.