Last Words is the sixth episode of the second season and the twenty-fifth of The Blood Gulch Chronicles.

The situation looks bleak for Red Team as the warthog continues to fire its mounted turret closer and closer towards Sarge's head. Simmons steps up and suggests they quickly do something before he is killed. Donut seemingly agrees, but claims Sarge's armor for himself.

At the same time, Tucker pulls the red wire out of Church's switch in order to stop the incessant beeping. The noise stops, and Church is overjoyed by the fact. He then learns that he cannot move his legs.

After losing connection with Church's body, the warthog deactivates just before its turret reaches Sarge, sparing him. Grif comments on the matter, asking Sarge if he is okay. Sarge tells him that he is fine, but also admits that he is disappointed as well. Sarge then claims that he could of taken on the warthog's turret, stating it to be a "worthy opponent". Grif is puzzled by his response, with Donut caustically implying to Sarge that it is impossible to fend off hundreds of armor-piercing rounds using only his face. Sarge ignores the logicality of it all, simply saying that it "surrendered". Doc, who is still sitting in the drivers seat of the warthog, tells the Reds that Sarge might be experiencing post-traumatic shock, and that everyone has ways of coping with stress.

At Blue Base, Church is furious that he cannot move his legs and blames Caboose for it. Caboose suggests that he "walk it off", but Church rebuttals his ignorance by calling him a moron. Tucker doesn't see it as a big deal, telling Church that he hardly used his legs before anyway. Caboose then exclaims to Church that he could walk on his hands instead.

Back at Red Base, Doc tries to unpin Sarge by backing up the warthog, but ends up crushing him even further by accident. Doc attempts another try, stating that it was in the wrong gear, but does so again. He apologizes for his impotency to back up, but Simmons tells him to get out. He is then forced out of the vehicle by both Grif and Simmons.

Meanwhile, at Blue Base, Church tells Tucker to start reattaching the wires they had previously pulled out in order to regain feeling back in his legs. Caboose attempts a conversation with Church, but is told to shut-up. Red Team is then seen approaching Blue Base from a distance. Caboose tries to warn Church, but is starkly told by him to remain silent. The Reds arrive at Blue Base, jumping to the conclusion as to why Tucker is kneeling in front of Church.

The Warthog has Sarge pinned and is slowly firing closer and closer to his head. Doc is still impotently sitting in the driver's seat.

Simmons: Okay, we gotta do something here guys.

Donut: You're right. I got dibs on Sarge's armor.

Cut to Blue Base with Tucker kneeling in front of Church. The beeping is still heard.

Cut to the Warthog and Sarge.

Sarge: Grif, if you see Lopez, tell him I forgive him. Tell him.. he was like a son to me.

Grif: I thought Simmons was like a son to you?

Sarge: No offense, Simmons. Lopez and I just.. understood each other better.

Grif: Yeah, and he ran away the first chance he got.

Simmons: And now he's trying to kill you with a remote control jeep.

Sarge: Ahhhh, what a little rascal.

Church: Oh god, yes! Finally! Some freakin' peace and quiet! I thought that was gonna drive me nuts! ...Hey. Why can't I move my legs?

Cut to the Warthog which stops firing.

Warthog: (emits its series of beeps, shutting down) Signal lost.

Grif: Wow, that was a close one. Are you okay, Sarge?

Sarge: Ah, horse puckey, I'm fine. Although I do have to admit, maybe a little bit disappointed.

Simmons: It's okay, sir. I know that you said a lot of things that you didn't mean. People say crazy stuff when they're faced with their own mortality.

Sarge: It's not that. I just felt like I could have taken him.

Grif: Taken who? The machine gun?

Sarge: Oh he was a worthy opponent to be sure, but right at the end there he was beginning to show signs of weakness. Cracks in the armor, if you will.

Grif: What? You can't fight a machine gun.

Donut: Yeah, Sarge. I know you're tough and all, but it is kinda hard to beat up hundreds of armor piercing bullets using only your face.

Sarge: And yet, he surrendered.

Doc: Guys, guys, it's okay, I've seen this before. Sarge just lived through a very traumatic ordeal. We all have ways of coping with the stress.

Grif: Oh yeah? How do you deal with it?

Doc: Oh I have my own system that works pretty well for me. ...By the way, the driver seat of the jeep is gonna need a thorough cleaning.

Church: This is great, this is just great! Thanks a lot, Caboose. Now what'm I supposed to do? My lower half is damaged.

Caboose: Why don't you try walking it off?

Church: I can't use my legs, moron.

Tucker: This doesn't seem like that big a deal. You hardly ever used your legs before anyway. I've never heard of a grown man asking for so many piggy-back rides.

Church: Hey, I already told you: that was for science.

Caboose: Why don't you just try walking on your hands? Then you could use your feet for high fiiiiives, and ...eatin' sandwicheeeees... and, you know, the important stuff.

Simmons: Hey, Doc, although I'm sure Sarge enjoys having his spine pulverized into dust, maybe you should go ahead and back up the Warthog.

Sarge: Yoh, geez! There goes mah last kidney! I was saving that one for a special occasion.

Simmons: I don't think so, Poindexter. Outta the jeep now!

Doc: I'm really sorry guys. I was only trying to help. Really!

Grif: Oh, is that all? I for one was totally confused. I thought you were savagely trying to kill our sergeant by ramming him over and over with a six thousand pound steel death machine. Now that we know that you're just trying to help, by all means, please continue.

Grif and Simmons: Get out!

Cut to the Blues. Tucker is kneeling in front of Church, working on his wires.

Church: Well just start reattaching wires, I'll tell you when I feel something.

Tucker: What about that? Do you feel that, Church?

Church: No, what're you doing? I don't feel anything.

Caboose: Oh, Church? You know, I was thinkin'. ...Uh yih yih ya know, when you, when you eat ice cream too fast sometimes and it hurts your brain?

The Reds are seen from a distance approaching Blue Base.

Caboose: (seeing the Reds) Uhhhh... Church? I think that you should know that the Reds are-

Church: Dammit, Caboose! In the short time I've known you, you've managed to call my girlfriend a slut, blow me up with a tank, shoot me in the head, and now paralyze me from the waist down! So I hope it's not too much for me to ask, just for once, if you'd shut yer freakin' mouth!

Simmons: Hey, Blues, we're here to- (sees Tucker kneeling in front of Church) What the hell are you guys doing!? 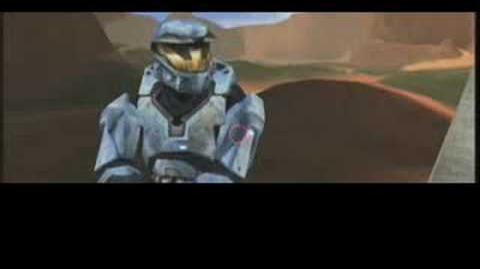 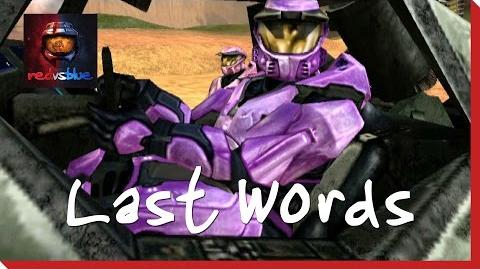 Last Words - Episode 25 - Red vs. Blue Season 2
Remastered
Add a photo to this gallery
Retrieved from "https://rvb.fandom.com/wiki/Last_Words?oldid=128785"
Community content is available under CC-BY-SA unless otherwise noted.