Last One Out, Hit the Lights

Last One Out, Hit the Lights is the nineteenth episode of The Blood Gulch Chronicles and the first season finale.

Set in a previously similar fashion on top of Red Base, Simmons asks Grif why they are in Blood Gulch. After a slight pause, Grif angrily responds by saying he doesn't know at all. Behind them, Lopez is suddenly possessed by Church, raising suspicion from Simmons. Simmons asks Lopez if he is okay, but Church (through Lopez) attempts to warn the Reds about Tex's impending attack on their base. Church then realizes he is speaking in Spanish (due to Lopez's Spanish speaking software) and is confused, wondering why he can speak Spanish fluently, but unable to before.

At the canyon, Tucker tells Caboose that Tex is almost done with her repairs on Sheila and begins to radio for Church. Caboose, however, begs Tucker to contact Church himself, and is given the chance to do so. While Caboose hails for Church, he supposedly reveals his real name as O'Malley, surprising Tucker. Caboose continues to hail for Church until the latter responds. Church, speaking in Spanish, tells Caboose that the Red Team is not listening to him due to him speaking in Spanish for an unknown reason, but Caboose is unable to understand him and instead tells Tucker that Church would like to "speak" with him.

Back at Red Base, Church attempts to have the Reds understand him by slowly speaking in Spanish, but is unsuccessful. Just then, Tex fires upon them with the tank, forcing Grif and Simmons to take cover. Tex continues to bombard Red Base from a distance with the tank while Tucker and Caboose look on via the scope of the sniper rifle.

Sarge boards the warthog in an attempt to repel the attack and tells Simmons to man the gunner position as he swings by to pick him up. Simmons acknowledges and sarcastically tells Grif to guard the cement ramp as he leaves. Simmons then boards the warthog and drives off with Sarge, but the two are quickly fired upon when Tex and Sheila blast at their vehicle, with the resulting explosion flipping the jeep over and launching both Sarge and Simmons. Grif ridicules them as they retreat back at the ramp, asking if they "won" the war yet.

Donut then emerges from the opposite side of the base and asks what is going on. Grif fills him in, telling him that the "chick in the black-armor is back again". Donut asks Grif if it is the same one that had stuck the grenade to his head before and the one that eventually led to him donning "light-red" armor. When Simmons assures this, Donut throws a plasma grenade of his own at Tex. Both the Red and Blue Team members watch as the grenade arcs halfway across Blood Gulch. Tucker, still under the impression that Donut is a girl, comments on his throw. The grenade lands on Tex while still sitting inside the tank's canopy.

The grenade explodes and sends Tex out of the tank and onto the ground, critically wounding her. Church, still in possession of Lopez's body, runs towards Tex as he screams her name out in Spanish. Sarge, however, mistakes this as a suicide attack from Lopez himself. Simmons suggests that they help Lopez, but is denied by Sarge, saying it will "ruin the moment". In her dying words, Tex thanks Church by ridding her of the A.I. before expiring.  Tucker sees this from atop the cliff and suggest to Caboose that they both return to Blue Base.  However, Caboose responds with a deep, menacing voice, repeating that his name is not Caboose but "O'Malley".

Camera pans up to reveal Grif and Simmons standing atop Red Base. Lopez is visible in the background.

Simmons: You ever wonder why we're here?

Grif: No. I never, ever, wonder why we're here. Semper Fi, bitch.

Simmons: What? What's wrong with Lopez?

They turn to look at him.

Caption: What? Why am I speaking Spanish? I don't know Spanish!

Caption: No, listen to me! The mean woman is going to kill you! She is fixing the tank!

Cut to Tucker overlooking Tex who is still working on the tank.

Tucker: Yes, you can be the one who radios Church.

Caboose: Thanks, man. (turns on radio) Calling Church. Come in, Church. This is your close, personal friend, Private O'Malley.

Tucker: O'Malley? You said your name was Caboose.

Caboose: I never said that, you guys did!

Tucker: Why didn't you correct us?

Caboose: Because I didn't want to be difficult. (turns on radio... again) Come in, Private Church. Do you copy? Soldier unit Tex almost has the armor vehicle situation rectified. Okay. We require verification of your... mission...ness. (clears throat) How is your progression?

Caption: Caboose! No one here is listening to me! I can only speak Spanish for some reason!

Sheila: Thank you for activating the M808V Main Battle Tank.

Tucker: Oh shit. We got trouble.

Cut back to Church (as Lopez) talking to Grif and Simmons.

Grif: Hey. I think if you're gonna live in this country, you should speak the language.

Sheila: (from a distance) Target locked.

Simmons: What country? We're on an alien planet.

Grif: What're you, a communist?

Sheila fires and hits the side of the Red Base.

Grif: Son of a bitch!

Simmons: Son of a bitch!

Caption: SON OF A BITCH!

Cut to Tucker talking to Caboose as he looks through the sniper rifle. Sheila can be heard firing in the background.

Tucker: Okay, I'm getting really sick of asking people what's going on through that sniper rifle.

Caboose: Church is getting mad at us.

Cut to Sarge getting in the Warthog and driving it.

Sarge: Simmons, I'm coming around in the Warthog. Get ready to take the gunner position when I come by.

Simmons: Yeah. Stay here, and guard this cement ramp. It's vital to our success.

Sarge skids near the base, Simmons hops on, and they take off.

Simmons: Alright, I'm on board.

Sheila fires and hits the rear passenger tire, blowing up the jeep and launching Sarge and Simmons.

Cut to Grif watching Sarge and Simmons come up the ramp.

Grif: Wow, back so soon? You guys win the war already?

Simmons: Yeah, uh, did you want to finish telling me the plan now, Sarge?

Sarge: If we survive this, I'm gonna kill both of ya. Slowly.

Grif: (kneeling down next to Simmons) Uh, hey, Simmons? By the way.. The ramp is secure.

Cut to the Reds. Donut emerges from inside the base.

Grif: That chick in the black armor's back!

Donut: What chick? The one that stuck the grenade to my head?

Simmons: That's the one.

Donut: The same chick whose fault it is that I'm stuck in this light red armor?

Grif: Donut, I understand the need to safeguard your masculinity, but really, dude.. It's a whole lot faster just to say pink.

Donut: Ohho..! Oh, I been waiting for this. (runs up to the edge of the base and yells) Hey, bitch! Remember me!? I saved somethin' for ya!

Donut throws a grenade. Grif and Simmons are shown following its arc, then Church, then finally Tucker and Caboose.

Tucker: Man... that girl's got a really good arm.

The grenade lands right on Tex's chest inside the tank.

Cut to Donut at the edge of the Red Base.

Church: ¡Dios mío, no! (runs out of the base toward Tex) ¡Tejas, Tejas!

Sarge:To fight the enemy head on, in hand-to-hand combat. Mano e mano. What a brave little compadre. Lopez, I never understood a word you said. But I do know one thing: You hated Grif, and that's the most important thing there is. Adios, amigo... Adios.

Simmons: Shouldn't we help him?

Sarge: Naw... That would just ruin the moment.

Cut to Church over Tex's body.

Cut to Tucker and Caboose on the ledge. Tucker is watching the proceedings while Caboose is facing the cliff.

Tucker: Crap. Church is gonna be pissed, and now he's got a body to kick our ass. Come on, Caboose, let's get back to base. 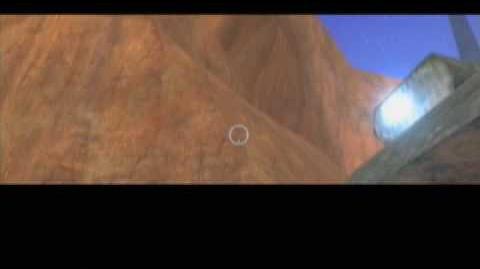 Last One Out, Hit the Lights
Original 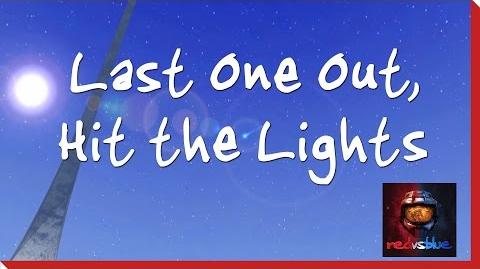 Last One Out, Hit the Lights - Episode 19 - Red vs. Blue Season 1
Remastered
Community content is available under CC-BY-SA unless otherwise noted.
Advertisement