Knock, knock. Who's there? Pain.

Knock, knock. Who's there? Pain. is the eleventh episode of the series.

The episode begins with Grif retelling the events of the previous episode, Check Out the Treads on That Tank, to Sarge while Lopez repairs the warthog. Fully taking the blame for his ill-tactical battle plan, Sarge and Lopez jokingly give him a 10-second head start to run away before shooting at him, only to shoot at him anyway, but narrowly missing.

Meanwhile, at Blue Base, Tucker briefs Tex of their current situation while Tex uses Caboose for "target practice", scaring him. While ignoring Tucker's attempts at friendly conversation, Tex decides to leave in order to infiltrate the Red Base, kill all the Red Team members, and retrieve Blue Team's flag back.

Back at Red Base, Donut expresses curiosity if Command would let him have his own color armor seeing as how he had taken the flag from Blue Team single-handedly. Simmons disagrees saying that he thought he was buying it from a store, but might instead give Grifs armor to him since he was responsible for the damaged jeep. Just then, Tex (in active-camouflage) throws a plasma grenade at Donuts head. Thinking its some sort of pulsating-"spider", he pleads for Grif and Simmons to take it off him before unexpectedly detonating. In the ensuing chaos, Tex quickly attacks Grif and Simmons, knocking them unconscious.

Sarge and Grif are standing next to the Warthog which is now on its side behind Red Base. Lopez is crouched over it, repairing it. A socket wrench is heard in the background.

Grif: And then I thought, you know, we could sneak around the side while they were hiding behind the rock, but uh, well that's when the tank showed up and.. shit just started blowin' up. I don't know. (sighs)

Sarge: (exhales in exasperation) Grif, do you have any godly idea how much this piece of equipment costs?

Sarge: Tell you what, Grif, I'm a fair man. I'll give you a ten-second head start here before I let Lopez do anything he wants to ya.

Lopez stops working and stands up to face Grif.

Lopez puts down his tool for a gun.

Grif: (backing away) Okay, uh, I guess I better get going then.

Lopez and Sarge look at each other then turn and start firing at Grif off screen.

Grif: Hey guys, that's not funny! Somebody could get hurt here.

Cut to the top of Blue Base where Tucker is standing next to Tex who is firing at something.

Tucker: That's basically it, sir. They have five guys over there and a big jeep.

Tex: And your flag. (reloads)

Tucker: Right, that too.

Tex throws a grenade at something.

Tucker: Uh, hey, Tex? I don't know what it's been like at your other bases, but we try not to use other soldiers as target practice here.

Camera pans, showing Tex has been firing "at" Caboose.

Tex starts looking over various weapons. Caboose runs up to Tex and Tucker.

Tex: (looks at Tucker while reloading a gun)

Tucker: Yeah, I used to have black armor too. It was black because I got this stuff all over it from th-

Caboose: (whispering loudly) I don't think he likes you.

Tucker and Caboose run up to the edge of the base.

Tucker: Where are you going?

Tex: Red Base. Kill everybody. Get the flag back.

Cut to Grif on top of Red Base.

Grif: So, Sarge thought my strategy had merit, but was poorly executed, probably because SOMEBODY didn't believe in it.

Simmons: Bullshit. He told me he thought you were a retarded monkey, and he's gonna suspend your weapon privileges.

Donut: Hey, since I captured the flag, d'ya think they'll give me my own color armor now?

Simmons: What do you mean "captured"? You thought you were buying it at the store, you idiot.

Simmons: Maybe they'll give you Grif's armor, since he destroyed the Warthog.

Cut to Sarge watching Lopez fix the Warthog. A socket wrench is heard in the background.

Sarge: Try connectin' that hose to that metal thingy there.

Sarge: I think I'll let you do it.

Grif: Simmons, what's going on? What's over there?

Simmons: (looking over the edge of the base) I thought I saw something for a second.

Camera pans down to reveal invisible Tex, then cuts back to Grif.

Grif: Hey rookie, tuck the flag some place safe until we can figure out what's goin' on.

Donut: Good idea. I was sick of carrying this thing anyway. (drops the flag into the middle of the base)

Cut to Tex, then to Grif and Simmons looking off the edge of the base.

Simmons: Did you hear that?

Cut to Tex who throws a plasma grenade, then cut to Grif and Simmons from behind. Grif turns around.

Grif: What the fuck?

Cut to Donut who has the plasma grenade stuck to his helmet.

Simmons: (turns around) What is that thing?

Grif: There's somethin' on your head.

Donut: What, is it a spider? Get it off!

Donut: What, like a blue spider? Get it off!

Grif: It's not a spider! Calm down. It's some kinda.. fuzzy, pulsating thing.

Donut: That doesn't sound much better than a spider.

Simmons: Does it hurt?

Simmons: Maybe we should try to take it off.

Grif: Good idea. Go for it.

Donut: Well somebody needs to get it off. Look, it might be dangerous.

Grif and Simmons: Son of a bitch!

Fade to black with sounds of people being hit.

More sounds of people being hit.

Grif: Don't kill me, I'm too good looking to die! 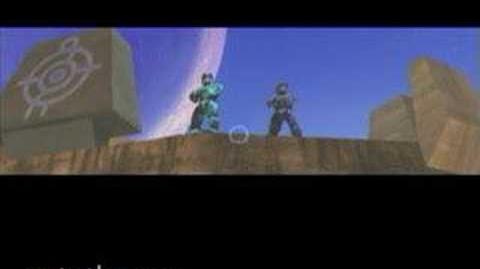 Knock, knock. Who's there? Pain.
Original 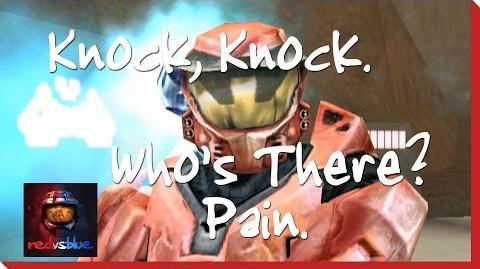