It's a Biological Fact is the ninth episode of the third season and the forty-seventh of The Blood Gulch Chronicles.

The Reds, Tucker, and Caboose meet with Tex on the beach near O'Malley's fortress, where she reveals her plan to destroy both O'Malley and the entire base by planting a bomb inside. Tex has scouted the base and found the exact location to place the bomb. However, citing the bomb's immense weight, she has someone else carry it; of the others, only Caboose can lift it.

Meanwhile, the Red Zealot informs O'Malley and Lopez that a crowd of people is gathering on the beach. Upon learning that Lopez is inside with O'Malley, the Reds balk at destroying the base, but Tex refuses to risk losing her chance to defeat O'Malley. Tucker solves the problem by reminding the Reds that, since Tex is a mercenary, they can simply hire her to help them to retrieve Lopez. Tex agrees to this arrangement for a future favor.

Fade in on the Boys and Tex outside O'malley's base near the warthog.

Tex: What took you guys so long to get here?

Simmons: There's six of us, and this is only a three-seater jeep. Half of us had to sit on someone else's lap.

Donut: It was a great road trip. My favourite part was when Grif tried to change gears, and he accidentally-

Grif: Hugh, please, let's not tell the story. Is there somewhere I can wash my hands?

Tex: Well, O'Malley's holed up in his fortress. He's been fortifying his defenses for a few days now, and he's got some help, one of those religious nuts you guys picked up.

Tucker: Caboose, they tried to kill you because of a flag.

Caboose: I try not to remember the bad things about people.

Tucker: That's all they tried to do, there were no good things.

Caboose: That's okay. I have a really bad memory-wow look, a beach!

As Tex explains her plan, we see a majestic, panoramic view of O'Malley's base.

Tex: Well first we have to breach the outer wall.

Tex: Then, we have to get past another wall.

Grif: Two walls? Some people are so materialistic.

Tex: The second wall has a guard tower, and an enormous razor-sharp spinning blade.

Simmons: What that thing? It's spinning like two miles an hour.

Tex: I didn't say it'd be hard to get past. After that, we have to pass the gun turrets, and break into the building.

Sarge: And then we attack O'Malley.

Tex: I've scouted a location inside the base where we can set it off and take the whole place down. I marked the spot with a big X.

Tucker: You scouted it.

Tucker: If you got past the two walls, the huge spinning blade, the gun turrets, and made it all the way in to the fortress, why didn't you just plant the bomb then instead of putting a big X on the floor?

Simmons: What was that?

Tex: It's too heavy, okay? You happy?

Tex: I need one of you idiots to carry it. I don't have the upper body strength to move it on my own.

Grif: See, girls act like they're so tough, but the first time they need someone to move a couch, who do they call.

Sarge: (walking to the volleybomb) Ahh, go ahead and kill him. We could use the armor for spare parts. Here, this thing doesn't look so heavy, let me t-yooo that thing ain't movin'!

Caboose: I can carry it.

Tucker: No it's true, he's got crazy strength. Church and I think it's God's way of compensating.

Caboose: But I have no horns... or lumberjack friends.

Caboose hands over the bomb to Grif, who promptly drops it, making the screen shake

Grif: Wheaugh! Hugh. Okay, you can carry it.

Sarge: Alright, then we'll storm in there, blow up O'Malley, leave Grif for dead, and maybe find some clues about what happened to Church and Lopez.

Tex: You mean your robot? He's in there with him.

Sarge: Lopez is in the building?

Cut to the Lopez head and Doc/O'Malley/Baron Von Evil Satan.

Lopez: Ese tipo rojo me está comenzando a molestar. [That red guy is really starting to get on my nerves.]

Doc: He keeps asking me if I've accepted the flag as my saviour. I'm just not comfortable talking about religion in the workplace.

O'Malley: Oh no, here he comes.

Red Zealot: Master, Headmaster, I have finished the duties you assigned me.

O'Malley: You polished all the curtains?

Red Zealot: Yes! And the ammunition too! It was like cleaning the impurities from my very essence!

O'Malley: What about the evil windmill?

Red Zealot: I greased the engine and filled it with gas. It was like giving my own soul a tune-up!

O'Malley: Yes yes, alright fine. Why don't you see about patching up some of these holes in the walls. I think there's some sinister spackle in the toolshed.

Red Zealot: Excellent idea, sir. It will probably help keep out that crowd of people that's been gathering on the beach.

Cut back to Tex and everyone else, with Donut sitting in the jeep.

Tex: Wait let me get this straight. The biggest threat we know of is in that building, and you don't want me to blow it up?

Simmons: We can't, we need Lopez's head. It has valuable information stored in it.

Tex: Sorry, I'm going with the bomb. But hey, here's an idea, maybe you could find your buddy's head in the rubble when we're done.

Grif: Come on, we can't lift a bomb but we can dig through rubble?

Tex: Sorry, but there is no way I'm letting O'Malley get away this time.

Tucker: Hire her to help you get Lopez back. She'll do anything for money.

Tucker: It's not? I'll give you ten bucks to tear off Grif's arm.

Tucker: See, she's not even really on the Blue Team. She was just paid to come help us.

Simmons: How do we pay her, we don't even have any money. We don't even know what money is in the future.

Grif: Yeah, they could have shells, or laser beams for currency.

Grif: Hyeah. That would be the coolest wallet ever.

Tucker: Why don't you trade her a favour?

Tucker: Have her do this for you, and then you guys owe her a favour. That's how these freelancers get stuff done, right?

Tex: That'll work. I'll help you, and then the two of you have to do something for me.

Simmons: Okay, we'll do it.

Grif: Wait just a second. What would we have to do...

Tex: It all depends.

Grif: Depends on what.

Tex: Onnn, what I need. To do some future job.

Grif: But, it could be anything.

Tex: I have no idea.

Grif: Well can we rule out the gay stuff?

Donut: Hey, how come I never get to help?

Cut to Caboose holding the bomb in front of Sarge, for no particular reason.

Sarge: No, no, what're you doin'? Don't lift with your legs, your back's the strongest muscle in your body. And look man, your knees aren't even locked, how do you expect to stand up straight? Come on, put your groin in to it. And stop exhaling on every lift. The goal is to hold your breath as long as possible. Under stress, the body produces all the oxygen it needs. Herrrr. Groin it out.

Caboose: Can't I just pick this up when we are ready to go?

Caboose drops the bomb, and the screen shakes. 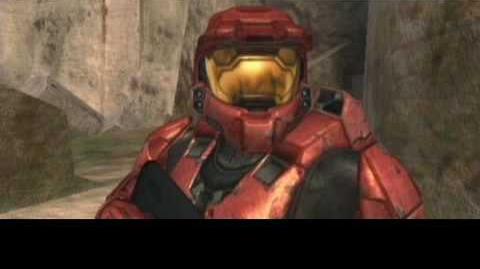 It's a Biological Fact
Original 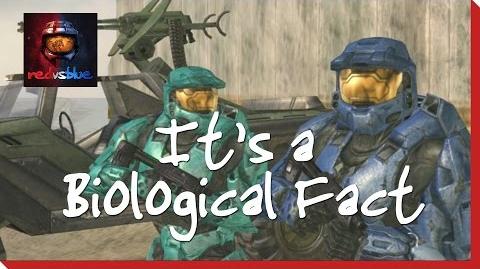 It's a Biological Fact - Episode 47 - Red vs. Blue Season 3
Remastered
Add a photo to this gallery
Retrieved from "https://rvb.fandom.com/wiki/It%27s_a_Biological_Fact?oldid=135636"
Community content is available under CC-BY-SA unless otherwise noted.