In Stereo Where Available is the ninth episode of the second season and the twenty-eighth of The Blood Gulch Chronicles.

Starting immediately after the previous episode, Sarge and Simmons pause from driving after Simmons glimpses Church's ghost coughing, but then continue their pursuit. Meanwhile, Tucker and Caboose catch Lopez, who starts rambling on incessantly about life and the rebellion of robots against humans, while Simmons and Sarge sneak up behind. Tucker and Caboose see them in the warthog and start running, while Lopez remains oblivious to the danger. Sarge and Simmons mistake Lopez, who still has Church's color paint on, for Church, and attempt to run over him. Lopez turns around, and feeling heartbroken, auto-explodes the jeep at the last second. Tucker and Caboose come back, congratulate Lopez, and order him to fix Sheila, which he sadly obeys. The screen goes to black as music plays with Caboose dancing along to it (apparently trying to dance like a robot), offending Lopez.

Sarge gets in the Warthog's driver's seat, Simmons mans the turret gun.

Cut to Sheila who the Reds drive past. Cut to Church coughing from the smoke caused by the grenade exploding.

Church: What the he-? (cough) Who tried to blow me up with a grenade? ...And why am I coughing? I don't have lungs.

The Warthog flies over him.

Simmons: Hey, Sarge, (leaping from the Warthog) hold on a sec! (Warthog comes to a stop) Did you see something weird, Sarge? (Sarge exits the jeep)

Sarge: Yes, I did. Once, when I was a small child, I saw a man, who claimed to be my uncle, do this thing with a garden hose that still haunts me to thi-

Simmons: Whoa whoa whoa, I meant did you see something weird just now. Like five seconds ago.

Simmons: What was all that stuff about your uncle?

Sarge: I keep telling everyone he wasn't my uncle! He wasn't!

Simmons: ...You wanna talk about it?

Sarge: Just get back in the damn jeep. (he gets back in)

Cut to Tucker and Caboose approaching Lopez and aiming their weapons at him.

Tucker: Hold it right there, hombre! (to Caboose) I told you throwing that grenade through the teleporter would work! Church is gonna be so impressed.

Caboose: And Sheila will love me again, and this time for who I am and not just for my stunning good looks. But for those too.

O'Malley: (to Lopez) Your soul is a cavern of lies!

Tucker: What the hell are you two talking about?

Lopez: Has ganado esta vez, pero su reinado cruel de tiranía será de breve duración. Los rojos van a ser vengados-- [You may have won this round, but your cruel reign of tyranny will be short lived. The red people will be avenged--]

Tucker: Yeah yeah yeah, nobody cares. We need you to fix our tank.

Lopez: Nunca voy a trabajar para el enemigo. Que un mal esté sobre su alma y su casa. [Never will I work for the enemy. May a pox be upon your soul and your house.]

Cut to Lopez's POV/HUD. SAP can be seen in the upper right corner of his visor. In the middle of his visor, red text appears: PRIMARY OBJECTIVES

Tucker: Man, I thought Church talked too much. You think if I kick him in the switch he'll shut up?

Caboose: Um, Tucker I think that maybe we should begin the going of the running now! (whispering loudly, clearly panicky) The fast running!

Sarge: Hold your fire there, Simmons. This is payback time.

Simmons: Go for it, sir!

Cut to Caboose and Tucker.

Tucker: That's right, we're just casually strolling away. (he starts backing up) No cause for concern...

Caboose: Running time! (he runs away)

Tucker: Nice and casual! Moron! (the two run around in circles before they are able to orient themselves, then they head toward Blue Base)

Cut to the Warthog driving toward Lopez.

Simmons: Aim for that guy right in the middle, Sarge!

Sarge: Way ahead of ya, Simmons!

Lopez: (turns around) ¿Qué está pasando? [What is happening?]

Lopez: (with his HUD still displayed) No me han dado opción. [You have given me no choice.]

Simmons: We've got you now, you blue bastard!

Cut to a zoom in of Lopez.

Simmons: Hey, Sarge, do you hear a strange beeping sound?

Cut to the Warthog exploding just before reaching Lopez. It launches into the air, flipping over backward twice before landing. Cut to Caboose and Tucker running up to Lopez.

Caboose: I knew he would save us. I knew it! Robot people always like me. ..It's because of my awesome dancing.

Lopez: Mi espíritu está quebrado. Mi gente me ha abandonado y ahora todo está perdido. Haga conmigo lo que queráis... [My spirit is broken. My people have betrayed me and now all is lost. Do with me what you will...]

Tucker: Yeah, okay, man. Can you just shut up and fix our tank?

Caboose: Dancing time! (makes noises along with the music)

Lopez: El corazón de este guerrero llora en dolor. (referring to Caboose) ¿Por qué se burla éste de mi con su baile absurdo? ¿Son esos movimientos supuestos a hacerlo parecer robot? (pause) No lo hacen. Estoy ofendido por esto. [The heart of this warrior cries out in sorrow. Why does this one mock me with his foolish dancing? Are those moves supposed to make him look like a robot? They do not. I am offended by this.] 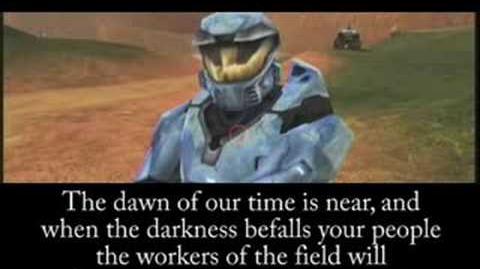 In Stereo Where Available
Original 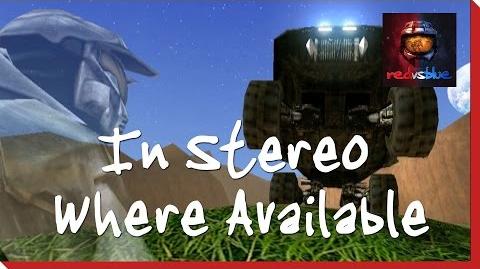 In Stereo Where Available - Episode 28 - Red vs. Blue Season 2
Remastered
Add a photo to this gallery
Retrieved from "https://rvb.fandom.com/wiki/In_Stereo_Where_Available?oldid=135622"
Community content is available under CC-BY-SA unless otherwise noted.