Hunting Time is the second episode of the fourth season and the fifty-ninth of The Blood Gulch Chronicles.

In Blood Gulch, Red Team takes potshots at Grif with their sniper rifles in order to get him to stop screaming. Grif eventually relents, and the team prepares to investigate their old base. Sarge, completely unaware that Sheila is roaming around behind him, gives a speech about alertness.

Meanwhile, the Blues prepare to hunt the Alien that snuck-up on Church. When asked about the Alien's whereabouts, Andy proves unhelpful, merely offering insults instead. Suddenly, the Blues spot the Alien, causing them to fire wildly and run away in panic - with the exception of Caboose, who at a safe distance the whole time simply asks "Did we win?". The episode ends with Andy laughing at and mocking the sudden retreat.

He starts running back and forth to avoid sniper shots.

Sarge: That was close!

Donut: I thought I went after Simmons.

Simmons: But doesn't that mean you go twice as much? Or, ten times as much?

Sarge: This is the best game since Grifball!

Sarge: Hey Grif! Move back and forth like one of those ducks at the carnival!

Sarge: No, don't duck, that makes you harder to hit. Act like a duck!

Simmons: Wait a minute, that was my turn!

Sarge: This is the Lightning Round.

Simmons: Who's in the Lightning Round--

Cut to Caboose, Tucker, Tex, and Ghost-Church standing outside the complex

Tucker: We haven't seen that alien thing come out, so he's probably still hiding in there.

Caboose: Does talking count as moving?

Tex: (stepping forward) All right, screw it. You guys get behind me, and stay tight.

Tucker: Eh, it was worth it.

Cut back to Blood Gulch, outside the Red Base.

Sarge: All right, men. Stay out of sight. We have to be prepared for anything.

Grif: Uh, why are we hiding from our own base?

Sarge: Because, we have no idea what's inside.

Simmons: Anything could have occupied the base after we jumped into the future.

Donut: Oh my God! What if we're in there?

Donut: I mean past versions of ourselves. We could go in there and meet ourselves. Oh man, we'd be best friends, we'd have so much in common. Finally, someone who shares the pain.

Simmons: Donut, that's not how time travel works. We don't leave copies of ourselves behind, and even if we did they'd all be eight hundred years old. They'd all be dead by now.

Donut: Speak for yourself, I could live to be eight hundred. I'm on this awesome diet!

Donut: Nah, that was just a fad.

Sarge: What's the new one?

Donut: I only eat foods that begin with vowels.

Simmons: That sounds really hard, what did you have for breakfast?

Donut: Eggs and Oreos. And for lunch I'm having asparagus... and Oreos.

Grif: Holy crap, I've been on that diet for years! I had no idea I was so healthy! I even cut out all the eggs! And I don't even know what asparagus is.

Sarge: All right men, stop your chatterboxin'. We've got to keep our eyes open for any sign of enemy activity.

A tank closely resembling Sheila rides by in the background.

Sarge: I can't have you not paying attention. You have to be alert!

Grif, Simmons, and Donut follow the tank with their heads.

Grif, Simmons, and Donut look back at Sarge.

Cut to Tucker sneaking up on an empty hallway.

Church: Hey, why didn't you bring that glowing thing?

Tucker: No way, I'd rather have a gun.

Church: But I've got a gun.

Tucker: What're you gonna do, shoot it with ghost bullets?

Tex: (from below) Hey, see anything?

Church: You know, Andy was here when I got attacked. Maybe he knows something.

Church heads for a window.

Andy: Hehehey, look who's back! The dickhead!

Church: Hey, up yours.

Andy: You back for another beatin'? It must be asskick-o'clock!

Andy: I don't know, last time I saw him he was halfway up your ass.

Tex: Is this bomb giving you a hard time?

Andy: I see you brought a girl with you. What're you gonna have, a crying contest?

Tucker: Huh? There it is!

Tucker, Church and Tex fire randomly in every direction except the one the alien is in

All three jump from various orifices of the building toward Caboose

Caboose: Did we win?

Tucker: Yeah Caboose we won, this is our victory lap!

Andy: Hey come back in, I think you're tirin' him out! 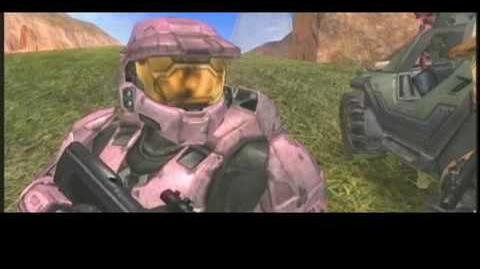 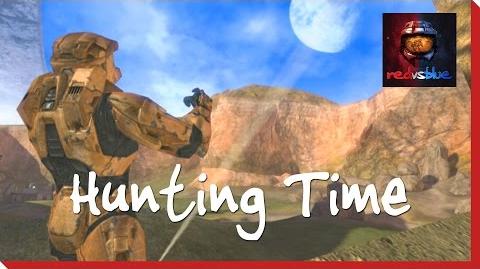 Hunting Time - Episode 59 - Red vs. Blue Season 4
Remastered
Add a photo to this gallery
Retrieved from "https://rvb.fandom.com/wiki/Hunting_Time?oldid=139637"
Community content is available under CC-BY-SA unless otherwise noted.