Human Peer Bonding is the thirteenth episode of the series.

The episode starts off where the previous one left off. Tucker, together with Caboose and Church, elucidate on the fact that Tex, previously thought to be a male, is in fact a female, as well as being Church's former girlfriend. Tucker, still in minor-disbelief, asks Church if Tex is indeed an actual woman, and not a guy. Church assures him stating he would obviously know if she was a guy or not. Caboose also asks why she has the name "Tex", with Church simply responding that she is from Texas. Church then adds that Tex wasn't originally as aggressive as she is now, explaining that she was recruited to be a part of a experimental military program that infused her armor with an artificial intelligence (or A.I.) that gradually made her more "tougher and meaner" than before. Tucker sarcastically expresses Church's luck on meeting Tex, as well as her rotten attitude and her "cybernetic enhancements". Caboose, however, is lost during the conversation and concludes that Church was only dating a "male robot", thus making him "gay".

Meanwhile, at Red Base, Grif and Simmons are shown guarding Tex at gun-point within the base's complex. As a moment of silence passes, Grif asks Tex if she really is a girl, but Tex does not respond. Simmons then says to Tex to ignore Grif. Grif then mocks Tex stating that she isn't so tough now that they had unloaded her weapon. Tex immediately responds stating she doesn't need a conventional weapon to kill him and quickly leans forward to scare him. Grif flinches back in response shouting not to hit his face.

Back at Blue Base, Church concocts a plan to rescue Tex from the Reds. Tucker and Caboose initially resent his plan only to learn that they will only be a mere distraction as Church will do the actual rescuing. However, Church tells them that they would need to appear as though they are Freelancer soldiers in "Special Forces" black-armor. Tucker asks as to how they would attain such armor, only to quickly figure out that he, as well as Caboose, would need to go through the teleporter to gain their blackened-armor, making Tucker nervous.

Fade in to Tucker on top of Blue Base.

Tucker: Let me get this straight... You're telling me that the guy that showed up here, scared the living shit out of us, shot at Caboose, and beat the hell out of the Reds wasn't a guy at all? That he was a chick? And, on top of that, she was your ex-girlfriend?

Church: In a nutshell, yes. That's an excellent summary.

Tucker: Caboose, I don't think anybody likes you.

Tucker: I don't think I've seen a girl that mean before. Are you sure she's a chick? And not a guy? Or like, part guy part shark?

Church: I'm pretty sure I'd know if Tex was a guy. And I'm definitely sure I would know if she was part shark.

Caboose: Wait, oh wait, oh wait. If she's a girl, then why is she named Tex?

Church: Uh... because she's from Texas.

Church: Trust me, it makes sense. And you can't blame her for being so aggressive. It's not entirely her fault to begin with.

Tucker: Right. You should blame God. First he makes hangovers, and now, half women, half sharks that won't even sleep with me. Thanks for nothing, God!

Church: Will you shut up with that? She got recruited into some kind of weird experimental program back during basic where they infused her armor with this really aggressive A.I. I'm not really sure how it all works, but all I know is it made her meaner and tougher than hell.

Caboose: Ooohhhhhhhhh what was the A again?

Tucker: So, the military put this program in her head, and that program made her a killer, but underneath it all she's really just a sweet, down-home girl?

Tucker: Wow. Sounds like you really won the lottery with that one. Good catch there, buddy. She's a keeper.

Church: So how're you doing, Caboose? Are you following any of this whatsoever?

Caboose: I think so... That guy Tex is really a robot, and you're his boyfriend. So that makes you... a gay robot!

Cut to Grif and Simmons holding Tex at gunpoint.

Simmons: Just ignore him, that's what I do.

Grif: Not so tough now that we unloaded your weapon, are ya?

Tex: Hey, punk, I don't need a weapon to kill you.

Grif: Yeah, right. What're you gonna do? Punch me?

Tex leans in at Grif quickly. Grif flinches and steps back.

Grif: Ahh! Not in the face!

Cut to Church on Blue Base.

Church: Well don't worry because I have a great plan for how we're gonna rescue Tex.

Tucker: A plan? Oh, man, I hate plans. That means we're gonna have to do stuff. Can't we just have a strategy or a ..mission statement?

Church: I just need you guys to run a distraction, while I spring Tex.

Caboose: (nervous) Distraction? Heh. That sounds a lot like "decoy."

Church: The way I see it, the Reds have absolutely no idea how many Freelancers we have out here. So all I need from the two of you is to run around in the middle of the canyon, wearing black armor, while I sneak in the back of the base.

Tucker: Sounds good. But Church, where the hell are we gonna get two suits of black armor?

Church looks at the teleporter, then Tucker looks at it too. 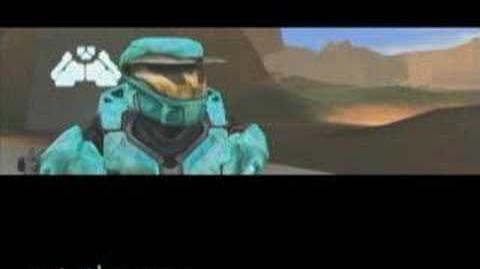 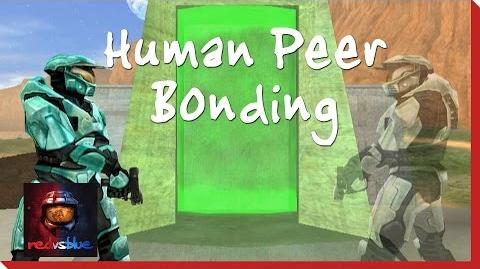