How the Other Half Lives

How the Other Half Lives is the fifteenth episode of The Blood Gulch Chronicles.

After being shot in the head during the previous episode, a confused Sarge is seen walking through some sort of "spiritual" realm depicted as Blood Gulch. Sarge repeatedly yells for anyone to respond, but receives no immediate answer until Church, who is nearby, tells him to stop. Sarge asks Church where he is, but Church finds it hard to explain, and instead tells him that he was shot in the head, causing him to appear in the realm. Sarge curiously asks Church if he's some sort of "angel", to which Church says yes too. Church then asks Sarge if he would like to go to "Heaven", adding that it would cost him 10 dollars, but Sarge tells Church that he doesn't remember dying. Church confesses to him that he was in possession of his body when he was shot and apologizes, annoying Sarge, claiming it unfair that he died. Church tells him to "join the club", explaining that he himself was killed by his own tank. Sheila is then shown to be within the realm, driving up to Church and locking onto him. Church then tells Sheila to go away, telling her that he still had not forgiven her for killing him.

Sarge and Church are then shown a view into the real world, albeit slightly distorted. Grif, with Simmons next to him, is seen kneeling over Sarge's lifeless body as he tries to resuscitate him. Sarge is further confused, and Church tells him that his men are apparently trying to revive him. Grif continues to blatantly revive Sarge, going as far as to repeatedly bash him with the butt of Sarge's shotgun. Simmons then suggests to Grif that he try CPR. Grif agrees and attempts too. Church is disgusted by the act and proceeds to walk away, but Sarge expresses his appreciation in disbelief; adding that he thought that his men never liked him. Sarge then tells Church that he regrettably feels bad for them, especially for Grif, but reveals that he only wanted to mess with him for one last time, noting he cannot anymore.

Surprisingly, however, Grif gleefully proclaims that Sarge is breathing. Sarge and Church are both surprised on the matter, and Sarge begins to regain consciousnesses in the real world. He then quickly fades away from the spiritual realm, saying goodbye to Church (to which he calls him a "wingless-angel") and thanking him for his "help." Church tells him to come back as they need to even the sides between the Red and Blue teams. Sarge then disappears.

Back in the real world, Sarge stands up and asks what happened. Simmons tells him that he was shot in the head, and was then given CPR in order to revive him. Sarge, thinking Simmons had done it, displays his gratitude towards him. Simmons reassures Sarge and confesses that Grif was the one who performed the life-saving procedure. Sarge then scolds Grif by asking why he gave CPR to a bullet wound to the head, thus causing Grif to be in despair. Sarge continues to berate him for his illogicality.

Colors are dulled. Sarge is running up a hill, toward the camera.

Sarge: (with a slight echo) Hello? ... Hello? I said hello? Hello, is anybody out here?

Church: (with a slight echo) Holy cow, would you stop yelling? I'm here.

Church runs up to Sarge.

Sarge: What is this place?

Sarge: Am I dead?

Church: Are you dead? Well, yeah, that's how I ended up here.

Sarge: Are you some kinda angel?

Church: Hey, you don't have it there, huh? Well uh.. that's too bad. Pretty crappy reason to be damned to Hell for an eternity.

Church: Yeah, that's my fault too. I was... sort of possessing your body at the time that you were shot. Sorry about that.

Sarge: Hold on a second, that ain't fair.

Church: Not fair? Yeah, join the frickin' club. I got shot by my own tank.

Cut to Sheila aiming at Church.

Church: Oh ha ha, very funny Sheila. Shut up. You know I still haven't forgiven you. I didn't say you could talk to me yet. Go there, g-get, go over by the base. Shoo, shoo!

Sheila lowers her turret and drives off.

Grif: Sarge! Don't you give up on me soldier, do you hear me? I'm ordering you!

Sarge: Who is that? Who's there?

Church: Looks like your guys are trying to save you.

Cut to Grif hitting Sarge in the chest with the butt end of his gun.

Grif: You gotta breathe, man! You gotta pull through! Come on, Sarge!

Sarge: That is not the way you were trained to do that, Private!

Church: He can't hear you.

Simmons: Grif, this isn't working. We have to try something else.

Cut to Church in "Dead World."

Church: If he gives you mouth to mouth, I'm leaving.

Simmons: ...Maybe you should give him mouth to mouth.

Cut to Church in "Dead World."

Sarge: I can't believe how hard they're trying to save me.

Church: Why wouldn't they? I mean, my team didn't, but, why wouldn't yours?

Church: Aw, don't sell yourself short. I don't even know ya, and here I am about to guide you to Heaven for only five bucks.

Sarge: Hold on, if you're an angel, how come you ain't got no wings?

Church: Because nobody rang a bell, ah heh heh heh heh. Seriously, do you have the money or don't you?

Sarge: Oh, I feel the worst about Grif. I always made fun of him. I never even told him.. he was my son.

Church: No way! The orange guy is your son?

Sarge: Nah, I just wanted to screw with him one last time. But now I'll never get that chance.

Cut to Grif rising to his feet.

Church: What? No, come back! We need to even the sides!

Sarge: Thanks for your help, wingless angel fella! (voice starts to fade away) Will I remember any of this?

Church: Yes, but only if you give me two dollars!

Sarge regains consciousness and stands up between Grif and Simmons in the real world, the wavy effect is no longer present.

Sarge: (clears throat) There. What... What happened here?

Simmons: Sir, you got shot in the head, so we gave you CPR and saved you, sir.

Sarge: I always believed in you, Simmons.

Simmons: Uh, actually, it's Grif you should thank, sir. He did all the work.

Sarge: Grif, why in Hell would you give somebody CPR for a bullet wound in the head!? That doesn't make a lick of sense.

Sarge: I mean it's all so damn inconsistent! What would you do if they stabbed me in the toe? (fade to black) Rub my neck with aloe vera? (Sarge says this in the Earlier Version) Hey there, Grif! I think I feel an aneurysm comin' on. Could you help me out with one of them therapeutic mass-ag-es? ...Use your fingers, not your knuckles. ...That there, that's good. Lower back. Yeah, I can feel that working already. Don't be afraid to go too low. (long pause) ...oh yeah, shiatzu. 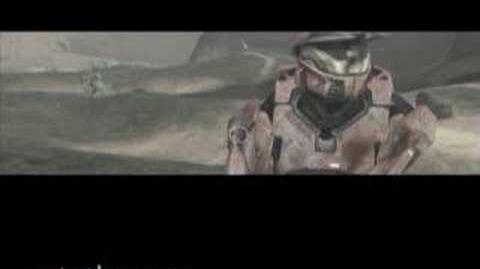 How the Other Half Lives
Original 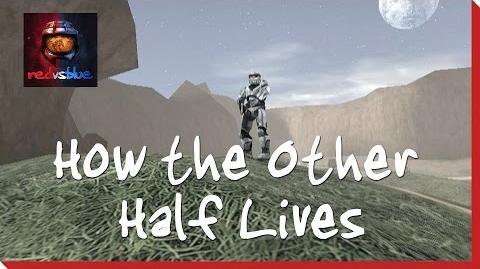 How the Other Half Lives - Episode 15 - Red vs. Blue Season 1
Remastered
Community content is available under CC-BY-SA unless otherwise noted.
Advertisement