Hello, My Name is Andrew is the sixteenth episode of the third season and the fifty-fourth of The Blood Gulch Chronicles.

The Blues watch the Reds play with their radio, at a loss for a motive. Caboose explains that they are talking about the distress signal, an explanation he got from Andy. The Reds are discussing the distress signal, which Simmons cannot pinpoint due to the substandard equipment. Caboose introduces Tucker and Tex to "Andy": the deactivated bomb. Predictably, it won't talk to them. However, Gary the terminal knows Andy very well. This episode also features another distant character.

Fade in to Tex overlooking the Reds

Tex: See? They're down there, messing with the radio.

Church: Oh, so that's what they're doin'.

Tex: Yeah. They must be plotting something.

Church: Or, maybe they're just listening to the radio.

Tex: I know plotting when I see it. That's plotting.

Tucker: Why? I already told them Red and Blue are the same, it's all a conspiracy.

Church: And I told you that's not true. Vic just made it up to confuse us.

Tucker: That just means he's part of the conspiracy.

Church: But he's the one that told you Red and Blue are the same.

Church: You just keep saying exactly, do you have a theory or don't you?

Tex: Look, I don't care about Red, or Blue. All I know, is that those guys are up to something down there.

Tucker: Maybe they're planning to use the radio to beam secret messages to the fillings in my teeth.

Church: Secret messages about what!?

Caboose: They are probably trying to tune in to the distress signal they heard on the radio.

Church: What makes you say that?

Caboose: Oh, I know all the details. They were in their car, the Boss Hogg, when Simmin, heard a distress signal, on, the radio, and Gruff was in the back seat. With a monkey.

Tucker: Hmm, I'm gonna go out on a limb here and assume that some of that is wrong.

Church: How do you know all this Caboose?

Church: Andy, who's Andy? Are you, are you Andy?

Church: No, I know, what's your first name?

Church: Lavernius, well then who's this Andy g- wait a second... are you black?

Tucker: Does it matter?

Tucker: Well if it doesn't matter then why are you curious?

Church: I don't know, I guess that's just something I should have picked up on after all this time.

Tucker: You know what else you should have picked up on? My fucking first name!

Cut to the Reds, with Grif sitting in the Warthog

Simmons: That's all it says, it doesn't even say where or who.

Sarge: We know who it is, it's on the Red Army open channel! That means the Reds have survived in to the future. Doncha see what this means?

Grif: Hughhhhhhh, that we have absolutely no hope of ever getting out of this army.

Sarge: No, it means we must have beaten the Blues! Otherwise there wouldn't be any Reds left. Finally, victory is ours! Wait a minute, this means I missed the entire war, aw dammit!

Grif: Yeah, everything must be great. That's why they sent out a distress signal.

Donut: Maybe it's not a distress signal. Maybe it's an open invitation to some formal ball!

Sarge: Simmons, have you tracked the source?

Simmons: Well sir, all I can tell is the direction, I have no idea how far it is.

Sarge: Why not? I thought you were our Unofficial Science Officer.

Simmons: That just means I'm smart. If you want me to multiply two big numbers in my head, that I can do. But I can't measure radio signals with no equipment!

Sarge: Is that right?

Cut to a shot of the unexploded bomb, and Caboose talking to the Blues

Tucker: Are you making fun of me?

Caboose: He told me all about what the Reds are up to. Didn't you Andy...

Caboose: Yes, and then we talked about all our adventures, did you know that he used to know Sheila? Isn't that right Andy?

Caboose: Say something Andy. You are embarrassing me in front of my friends.

Tex: Caboose, I think you're losing it.

Tucker: Also I wouldn't really call us 'friends,' we're more like acquaintances or, people who work with other people they hate.

Cut to Church talking with Gary

Church: Gary, I need you to tell me some more about the alien race that needs Tucker's sword.

Gary: I do not know anything about them.

Church: You don't know anything about the aliens that programmed you?

Gary: Correct. Instead they filled all my memory banks with information about the great destroyer and his race.

Gary: That is not what they call you. but correct.

Church: Why, what do they call us?

Church: That's an insult, isn't it.

Gary: Perhaps this can best be explained in the form of a knock knock joke.

Church: You are who.

Gary: You are a dirty dirty shisno. ha ha ha.

Church: Alright, what does it mean?

Gary: What is the most foul-smelling animal on your planet?

Gary: Not exactly. does a skunk defecate?

Gary: And does the skunk's defecation in turn produce its own excrement?

Gary: Then there is no equivalent for shisno in your language.

Church: Hey, does that bomb, ever talk to you?

Church: Yeah, I didn't think so.

Gary: Andy and I are not on speaking terms right now.

Gary: Correct. He is kind of a jerk.

Gary: That was very rude.

Andy: Ah, shut up ya Shisno! 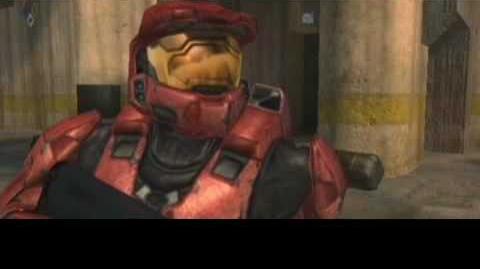 Hello My Name is Andrew
Original 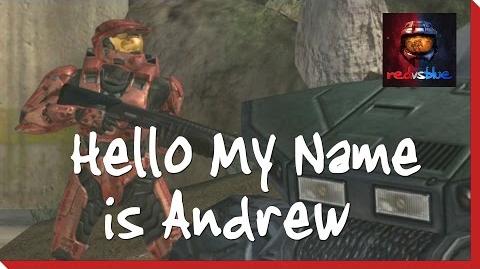 Hello My Name is Andrew - Episode 54 - Red vs. Blue Season 3
Remastered
Add a photo to this gallery
Retrieved from "https://rvb.fandom.com/wiki/Hello,_My_Name_Is_Andrew?oldid=135644"
Community content is available under CC-BY-SA unless otherwise noted.