At the UNSC Scrap Metal Recycling Station, three Longswords exit an enemy spacecraft and fly straight towards the Mother of Invention. Inside the Freelancer frigate, the Counselor warns the Director about the fighters, so the latter orders him to fire at will, resulting in a dogfight between the four aircrafts. As the Mother of Invention begins to take fire, the Director orders the Counselor to release the dropships and get "the team" into position.

Four Pelican dropships soon descend from the Mother of Invention and fly out into space. Inside the last Pelican dropship, Carolina and Pilot Four Seven Niner complain about York's failure to provide an opening to the Insurrectionist Leader's hangar. So, Four Seven Niner decides to send the Freelancers into the enemy ship's main hangar and tells Carolina to get her team ready. Carolina exits the cockpit as a result and enters its rear hangar, where North Dakota, South Dakota, Washington, and C.T. are seen preparing their jetpacks. Wash checks to see if Carolina will be ready, due to the fact that she gave up her A.I., but Carolina tells him that he should worry about himself, preparing her jetpack as well.

On the opposite of the hangar, South makes sure that C.T. is ready, due to her silence, in which C.T. says that she is trying to prepare herself. As the Pelican begins to take fire, Four Seven Niner opens the rear bay in order to release the five Freelancers. After a short pep talk by Carolina, the Freelancers exit the Pelican and fly out into space, heading straight for the enemy spacecraft. As the Freelancers enter the spacecraft the Insurrectionists begin to open fire, prompting them to retaliate. Carolina uses a Gravity Hammer she obtained from the Pelican to eliminate several soldiers. Meanwhile, Wash works on a nearby computer in order to override security, but accidentally disables the ship's artificial gravity. The Freelancers, however, use this to their advantage, as they eliminate more soldiers by enabling their grav-boots to keep themselves balanced.

After an intense battle, Wash reactivates the artificial gravity, but nearly gets hit by a Warthog in the process. As the Freelancers regroup, Carolina orders Wash and North to secure a hallway and South to access the Leader's location. Suddenly, Carolina realizes that C.T. is nowhere to be found. Outside the spacecraft, C.T. is seen alone flying in space. She enters a dark hallway through a hole on the spacecraft. Using her helmet flashlights, C.T. spots a door in front of her, with a few Insurrectionists inside. She opens the door and causes the soldiers inside to open fire at her.

The Insurrectionist that York incapacitated drifts by the camera, still sitting in his chair. Camera zooms in on an enemy base and then zooms out. It follows three fighter jets leaving the base. Cut to the Director and Counselor inside the Mother of Invention.

Director: Fire at will, Counselor. Let's send them back to the scrapyard.

The fighter jets proceed to attack the mother of invention while it fires back and takes out a two of the three jets, but the remaining one keeps shooting. Cut back to the Director and Counselor reacting towards the blasts

Counselor: It appears we are now taking fire.

Director: Release the dropships, get the team in position.

Cut to the Mother of Invention firing and four Pelican drop ships exiting it. Cut to the inside of the of the last Pelican dropship

Four Seven Niner: Well, that went to hell quicker than we thought. Out of the frying pan into the shit.

Carolina: We're going to need a new insertion point. York was supposed to open the leader's hangar for us.

York (over radio): It wasn't my fault!

Four Seven Niner: We'll have to settle for the main hangar.

Carolina: Which one is that?

Four Seven Niner: The one with the shooting things coming out at us.

Cut to enemy base firing at the dropship, it manages to hit it.

Four Seven Niner: I'd get your team ready; we're gonna come in hot.

Carolina heads to the back of the dropship where Wash, C.T, South, and North are putting on jetpacks.

Carolina: (Shouting) You heard her, we're going for the main hangar! Be ready for anything.

North Dakota: So much for a smooth ride.

North: Hey, I'm not the one who needed a barf bag on all our family trips.

Washington (to Carolina): How are you feeling? Are you up to this?

Carolina: Say what you want to say, Wash.

Washington: It's just, giving up your AI was a big deal. I thought-

Carolina: I'll be fine. Worry about yourself.

South (to C.T): You're awfully quiet.

South: Hey, worst comes to worst, we'll just get kicked off the leaderboard. At least us ladies will be sticking together, right?

Cut to Four Seven Niner at the front of the ship getting hit by enemy fire.

Cut to the Freelancers looking out of the back of the ship.

C.T: Right, all together!

Carolina: Use your packs sparingly. Course correction only. You don't want to end up like Georgia.

Washington: Wait, what happened to Georgia?

South: Nobody knows! They never found him!

Washington: Are you sure these things are safe?

Camera zoom on North's sniper rifle and him ejecting a spent round. Cut to Four Seven Niner at the front of the dropship making a turn. Which then shows the freelancers jumping out heading inside of the hangar. Cut to two Insurrectionists in the hangar, with one holding a box of shotguns

Insurrectionist #2: No shit, we're under attack. What do you think we're doing, rolling out the red carpet?

Freelancers are seen coming in except C.T.

He drops a shotgun, which discharges onto the other Insurrectionist, knocking him over.

Insurrectionist #2: Not again... Sorry about that.

He then gets shot and falls over. Camera then shows freelancers being shot at. Carolina runs ahead and starts to fight the Insurrectionists with a gravity hammer, Washington heads to the control panel.

Washington: Okay, where's that security override? Come on... damn it!

Washington punches the control panel and disables the artificial gravity

Insurrectionists start to float away from the ground and fire randomly into the air, some hitting other, yelling in confusion.

Insurrectionist: Ahhh! What the fuck?

South and North shoot at some soldiers off screen. Carolina then comes in and with the gravity hammer knocks a warthog into a group of insurrectionists. She then pulls out her two plasma guns and jumps from warthog to warthog obliterating soldiers. She kicks a Warthog as Washington returns the gravity to normal

The Warthog Carolina kicked flies at Wash and he ducks

Washington: Why do cars hate me?

Insurrectionist and Warthogs fall to the ground and Carolina drops down on one knee unharmed. The team regroups.

Carolina: They know we're inside. Wash, North, secure that hallway. South, see if you can access the leader's location, we don't leave without him.

Cut to C.T landing on the outside of the ship. She hops down a hole in the ship then proceed down a hallway and opens a door where many Insurrectionists are waiting

Insurrectionists: Intruder, get him! Open fire!

The Insurrectionists fire at C.T. 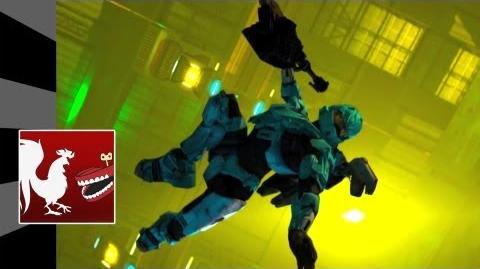 Retrieved from "https://rvb.fandom.com/wiki/Heavy_Metal_(Season_10)?oldid=142305"
Community content is available under CC-BY-SA unless otherwise noted.