Heavy Metal is the tenth episode of the third season and the forty-eighth of The Blood Gulch Chronicles.

After discarding two of Sarge's suicidal battle plans, the Blood Gulch group invades O'Malley's fortress and are pinned down by mini-gun turrets manned by the Red Zealot and Lopez's head. Tex snipes Lopez's head off his turret, but the Zealot pins her down with gunfire. Simmons and Grif manage to enter the base and move on to look for O'Malley. Tucker, who had fallen into a hole near the windmill, finds a mysterious sword, and uses it to kill the Red Zealot. Meanwhile, carrying the bomb inside the fortress, Caboose mistakes Tex's "X" marking for a plus sign. He continues on and stumbles across a computer, from which he hears the voice of Church.

Sarge: Okay, listen up dirtbags. If we're gonna invade this fortress, we need a good gameplan. I have got two options we can use.

Cut to a black and white re-enactment of Sarge's plan.

Sarge: Number one, we all run straight at the base in a single file line, screaming at the top of our lungs. The enemy will be so flabbergasted, by the time they have a chance to regroup, we'll already be inside.

Cut back to Sarge and the dirtbags.

Tucker: Oh yeah right, they're not gonna get surprised, they're just gonna start mowing us down.

Sarge: That's the inherent beauty of the single file line. They can only kill the person in front. So if we order from least important to most important, with Tucker being in the front and me being in the back, then we just might make it through.

Simmons: Don't you think Caboose should be in the back, since he's the one carrying the bomb?

Sarge: Nope, Caboose is in front of me. We need someone in back who can objectively evaluate how the plan is working.

Tucker: How're you gonna know if it's not working?

Caboose: (holding the bomb) I think that's a good plan.

Grif: Sarge, while that's the most retarded idea I've ever heard, I just wanted to thank you for not putting me in front of the line.

Sarge: Don't get misty, Francine. We'll have already killed you and used your corpse to jam up the windmill.

Cut to a black and white re-enactment of Grif's lifeless corpse riding up on the windmill.

Cut back to Sarge addressing the audience.

Sarge: I think we can all agree given our current situation, it's the perfect plan.

Sarge: Okay, well let me tell you about my other plan. Using parts from the Warthog-

Grif: (to Tex) I'm hoping you've got a better idea.

Sarge: (under Grif's line) We build what I like to call "the Grif Cannon."

Sarge: Utilizing the power of the Grif Cannon, we make a Grif-sized hole in the outer wall. ...Or we paint it a very disgusting color.

Cut to O'Malley ranting about something.

O'Malley: Hahaha, fools. They don't stand a chance against us, hahaha. Do they men?

Lopez: No. Los aplastaremos. [No. We will crush them.]

Red Zealot: The Flag is on our side. We will be victorious!

O'Malley: Stupendous! To your battle stations, on to crushing victory! The fools don't stand a chance against our might! Muahahaa.

O'Malley: What're you still doing there?

Red Zealot: I forget. Which battle station is mine? I'm still learning my way around the fortress.

Lopez: Necesito que alguien me lleve. No tengo ningún torso. [I need someone to carry me. I have no torso.]

Cut to Sarge on a ramp, talking over radio sounds for a bit.

Sarge: Okay, is everyone ready? Donut, Caboose and I will move the bomb down the staircase and along the left side of the base.

Caboose: (holding the bomb and talking in a strained voice) Please hurry, I don't know how much longer I can talk like this.

Donut: Man that does look heavy. You really should consider wearing some kind of supportive undergarment.

Caboose: U-no thanks. I can do it.

Donut: Come on now, don't be shy. You can borrow one of mine! I'm thinking something with lace. Lace is totally in right now!

Cut to a random sniper rifle.

Sarge: Simmons, you and the two bullet magnets move up the right side and try to cause some kind of distraction.

Sarge: As long as it draws their fire away from us and towards you I don't care.

Donut: Try some dance moves! Oh! You could do a musical number!

Sarge: Get off the radio, Donut!

Simmons: Alright, looks like we're on our own, guys. Tex, how does it look from up there?

Pans up to Tex who's actually in a reasonable tactical position.

Tex: I don't see any movement... but the guns are definitely online.

Tucker: You know what, I miss the old days, when we didn't risk our lives, and you guys were all just a bunch of nameless assholes I would yell at with Church.

Grif: It's okay. We hate you too man.

Cut to The Red Zealot taking up one of the turrets.

Cut to Lopez's head on the other turret.

Lopez: No los dejaré cruzar la frontera. [I will not let them cross the border.]

Cut to Simmons and the bullet magnets in a cave.

Simmons: Alright, so far so good. Sarge, we are in position.

Cut to Sarge in front of a sign that says Camp Froman.

Sarge: Roger that. We are also in position. No sign of the enemy.

Donut: Ma-han, this is the easiest fortress invading mission, of all time.

Caboose: Maybe for you, this thing is heavy for me.

Sarge: Careful with that thing, Caboose!

Sarge: You could blow us all to smithereens!

Donut: Sarge, I'm pretty sure that guy up there with the gun, sees us.

Sarge: You wanna blow people to smithereens, at least make sure Grif is nearby.

Caboose: A duck? Where? I love ducks.

Sarge: Get down, idiot.

Cut to Lopez somehow firing on the bullet magnets.

Sarge: Good! Now jump up and draw them off.

Grif: He was breaking up. I think he said something about staying here, and not doing anything risky.

Simmons: Tex, see what you can do about that gun!

Tex shoots the Lopez head off his gun.

Simmons: Tucker. You and Tex head up across that bridge. Try to take out that other turret. We'll head in to the base and see if we can find O'Malley.

Tucker: Why do I have to go up against a machine gun, and you guys get to go play hide and seek?

Simmons: The guy we're seeking has a rocket launcher.

Cut to Sarge and co.

Sarge: Caboose, we'll hold them off from up here. You take the bomb and try to sneak in the front of the base.

Donut: Wow, Sarge. You actually decided to sacrifice yourself for someone else!

Cut to Tex and Tucker at the big windmill thing.

Tex: I can't see him from here. Let's move out. (runs across the fan)

Tucker: Okay, but jus- (falls down behind the fan) Whoahoa! Ah!

Tex: Tucker! Are you okay?

Tucker: Yeah I'm okay, I dropped down into some kind of hole. Can you give me a hand?

Tex: Oh. Let me take out this turret. I'll be back for you later.

Tucker: What is that? Hoaho, what the hell is this?

Cut to Simmons and Grif at the other giant fan thingie.

Simmons: Okay Grif, we just need to jump through here.

Simmons: Me? Why me first?

Grif: Because, I don't wanna die?

Sarge: No, shoot the guy with the bomb! You're ruining the plan!

Tucker: (arriving next to the Red Zealot) Hey asshole. (flips out some glowing blade thing)

Tucker steps forward and slices the Red Zealot in the groin, sending him flying off the base to land on the ground below, on his face.

Tex: Hey, where'd you get that?

Tucker: I dunno, I found it in the hole. Pretty cool. Look what I can do. (swings it in the air)

Tex: Hey, you wanna trade it for the sniper rifle?

Tucker: No thanks, I'm good.

Cut to Caboose wandering around aimlessly.

Church: (from nowhere) Hello? Caboose, is that you? Can you hear me? 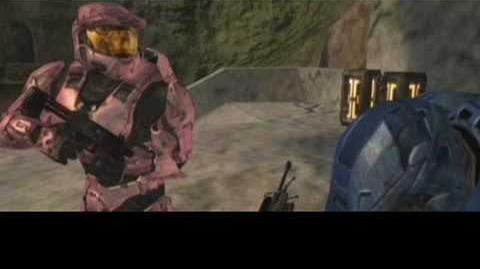 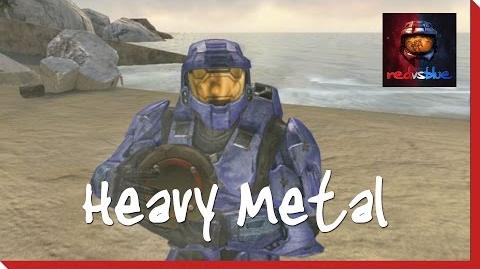 Heavy Metal - Episode 48 - Red vs. Blue Season 3
Remastered
Add a photo to this gallery
Retrieved from "https://rvb.fandom.com/wiki/Heavy_Metal?oldid=135637"
Community content is available under CC-BY-SA unless otherwise noted.