Head Noob in Charge is the fourth episode of The Blood Gulch Chronicles.

Church talks with Tucker about his girlfriend back home. Attempting to join the conversation, the Rookie inadvertently calls Church's girlfriend a "cow" (though Tucker interprets that as calling her a "slut"). In response, Church instructs him to guard the Blue Team's flag alone, telling the Rookie to wait for the "General" (in which they made up) for a random inspection.

Shortly after, Donut arrives to Blue Base, mistaking it as the local store from the previous episode and the Rookie as the clerk. The Rookie, under the impression that Donut is this supposed "General" Tucker and Church had told him about, states that they only have the flag and not the "headlight fluid" or "elbow grease" as asked for by Donut. Not wanting to leave empty-handed, Donut reluctantly takes the flag. The Rookie then tells Church and Tucker that the "General" came by and picked up the flag, much to the annoyance of Church.

Church, Tucker, and Caboose are standing next to the tank outside Blue Base.

Church: Yeah I'll let you in on a little secret, I've uh... I've actually got a girl back home.

Church: No, man, she's just my girlfriend, ya know? We were gonna get married, but I got shipped out... ah, you know how it works.

Tucker: Oh, well, you gonna marry her when you get back?

Caboose: I'm not gonna get married. My dad always said, "Why buy the cow when you can get the milk for free?"

Church: Hey, rookie.. did you just call my girlfriend a cow?

Tucker: No, I think he called her a slut!

Church: I'll tell you what, noob, I could sit out here and listen to you insult my girlfriend all day long, but as it turns out, I got a lot more important job for you to do.

Church: See, we've got this General.

Caboose: When is he coming by?

Tucker: We never know. Could be today, could be a week from now.

Caboose: You want me to stand at attention for a week?

Church: You know, you don't sound very grateful. This is the most important job at the whole base. You're gonna be right there with the flag.

Caboose: What's so important about the flag?

Church: Oh, come on, don't they teach you guys anything in training?

Caboose: They didn't tell us anything about a flag. Why is it so important?

Church: It's just important, okay? Trust us. So when the General comes by, the first thing he's gonna want to do is inspect the flag.

Church: So just go in there, you know, far away from us, and wait for him.

Caboose turns and heads for the base, but stops half way and turns around.

Caboose: Uh, how will I know when I see him?

Tucker: There's only three of us out here, rookie. He's gonna be the guy that doesn't look like one of us.

Church: Now get in there, and don't come out! (turns to Tucker) Man, that guy is dumber than you are.

Tucker: You mean he's dumber than you are.

Church: Wow, Tucker, that was a great come-back.

Caboose emerges from the base with Church and Tucker in the distance.

Church: Oh my god, WHAT!? (turns to Tucker) Tucker, I swear, I'm gonna kill him!

Caboose: Sorry about calling your girl a slut...

Church: ROOKIE! SHUT UP! JUST SHUT UP, YOU'RE DRIVING ME CRAZY, GET IN THERE!

Church: (turns around to face Tucker's back) Tucker, are you laughing at me?

Donut steps up behind Church.

Donut: Excuse me, sir, can I ask you a question?

Church:Dear God in Heaven, rookie, if I turn around, and you are not inside, I.. I can't be held responsible for what I'm gonna do to you!

Donut: What did I do?

Donut runs in the base and walks up to Caboose.

Caboose: Wow, you got here fast!

Donut: Why is everyone so freakin' rude in this canyon?

Donut: Finally, someone with a little respect around here.

Caboose: Yes, sir! I assume you're here because of this... (turns toward the flag)

Donut: Wait, is this all you have?

Donut: Aw man, this figures. Shit. What about elbow grease?

Caboose: No. All we have is this flag.

Donut: Well, I can't go back empty handed. I guess I'll take that.

Caboose: Sure, that makes sense. I guess.

Donut: (leaving with the flag) Man, they're gonna give me so much shit for coming back with just this stupid flag.

Church:Well, enough gabbing out of us, let's take this bad boy out for a spin. Go ahead and hop in, Tucker.

Tucker: Me? I can't drive that thing.

Church: You're telling me you're not Armor Certified?

Tucker:I ca- I don't even know how to use the fucking sniper rifle. Don't you know how to drive that?

Church: No! ..Holy Crap! Who is running this army!?

Caboose: (emerging from the base) Hey! Just wanted to let you know the General stopped by and picked up the flag!

Church: (to Caboose) Yeah! Okay! Whatever, moron! (to Tucker) Why would they give us a tank, if nobody here knows how to drive the damn thing? ...Wait a second... What did he just say? 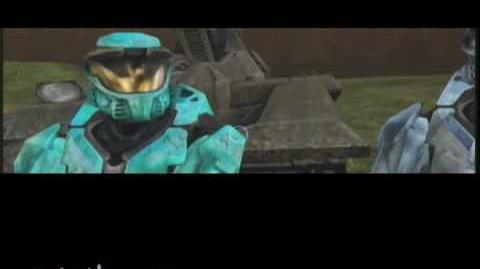 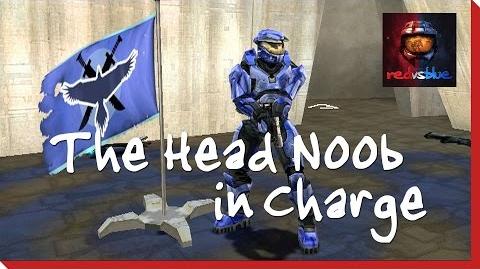