Towards the end of the Blood Gulch Chronicles, Omega made his way into the minds of several of the Reds and Blues... and what he saw cannot be unseen.

Vic: Around the end of their time in Blood Gulch, the Reds and Blues had a run-in with one bad bro-chacho: the A.I. Omega. AKA O’Malley. AKA Lord Satan von Kills-A-Lot. This duderino had a habit of infecting people's brains via helmet radios, making them do all sorts of evil stuff. Yeah, I don't get how it works either, but man! What I wouldn't give to see what he saw inside their heads... If only there were some kind of short story was...

Fade in to the Reds hunting down Caboose in their jeep. Caboose is hiding behind a tree.

Simmons: Come out so I can shoot you ya fuckstick!

Grif: Where did Caboose go?

Sarge: I don't see him. Caboose!

Simmons: Come out Caboose, all we wanna do is shoot you!

Caboose: Don't listen to them, it's a trick!

The Warthog's radio starts picking up the Blues

Tex: (over radio) This is Freelancer Tex broadcasting on an open channel.

Church: (over radio) This is Private Church broadcasting on an open channel.

Grif: Why are the Blues on the radio?

Simmons: Who knows? (radio turns on) Hey Blues, shut the fuck up, get off our radios and quit running our batteries down!

O'Malley shoots in to Simmons' open radio frequency. He appears inside Simmons’ mind.

O'Malley: Yes, your mind now belongs to me, Tex. With your body, I shall exact my diabolical- Wait a minute...

O’Malley sees a slab, a bookshelf filled with books, and a bust of Simmons.

O'Malley: What is- Are those? No. Nooo! This is not the brain that I meant to infest!

Simmons and Grif walk in to see O’Malley.

Simmons: Oh, my, a guest. Hello there. (to Grif) We have a guest. Grif, you idiot, fetch his coat, and give him a glass of our finest Irish whiskey.

Grif: (Whining) Do I have to? I'm just so lazy and gross, and I'm pretty sure I disrespect you behind my back. I just can't prove it yet.

Simmons: Don't make me repeat myself!

Grif: Fi-ine! (walks out, stops, and whispers) I don't respect you.

Simmons: (sigh) Sorry about that, I'm so happy you here. Welcome to Chez Simon. It's not often I have company.

Simmons: What!? But you just got here, you can't leave!

O’Malley: If you attempting to hold me against my will, I shall remove your eyes in your tiny skull, and replace them with ping-pong balls with similar eyes drawn on them!

Simmons: (sigh) Stand down, Sarge. Stand down. I'm sure it's just a miscommunication. Nothing to worry about.

Sarge: Understood. But if he gets up to any funny business, KAPOW! Heh heh heh.

Simmons: Oh, Sarge, you're the best commanding officer a gentleman could ask for.

Sarge: Well, that just means the world to me. Coming from you, son. And I don't mean “son” as a term of endearment, or a celestial body, but as a subtle way of telling you that you secretly my true offspring, even though I'll never admit it in public or to anyone else!

O’Malley: (groans) And here I thought the blue one was a delusional...

Simmons: Oh boy, I can't wait to show you around. I've been planning this for a very long time.

O’Malley: You planned to have your mind invaded by Artificial Intelligence?

Simmons: You could never be too careful. Now first, I have some saved-up extra credit homework from my twelfth grade calculus class, I figured we could do that together and then daydream about all the pretty girls I had crush on in college–I remember all of them–uh, they usually hang out next to the repressed memories I have of them rejecting me.

O’Malley: And where is that?

Simmons: You know, I don't remember...

O’Malley: I will not stand for this torture! (hits Simmons on the head)

Simmons: Aah, not the face!

Cut to Blood Gulch where Simmons was possessed by O’Malley

O’Malley: Do it now, or I will kill every last one of you! And then everyone else here as well! Just to prove a point! Mwahahahahahahaha!

Simmons: Wait a minute, who said that? Did I say that?

O’Malley: We said it, you fool! I'm in control now! Hahahahahaha!

Simmons: Whoa, I sound badass. Make me tell Grif to suck it!

O'Malley: Suck it you fool!

Sarge: And what's wrong with your voice?

O'Malley: Nothing. Why does something have to be wrong with my voice? Maybe something's wrong with your voice. Ever think about that, cocksucker?

Simmons: Shit! No! Nonononono! Sarge is gonna kill me!

O’Malley: There. Happy, you dimwit?

O'Malley: Simmons is getting a promotion. Mahaha, mua-

Tex creeps up on Simmons and knocks the O'Malley out of him.

O'Malley: Ow, the back of my lower legs! Ow, the side of my head! The back of my face! The front of my front!

Cut to Simmons’ mind, rumbling appears where Tex is beating him.

Simmons: Hey, wait! Tex is beating us up!

Simmons: And gimme the controls back, you're doing it wrong!

O’Malley: Not a chance, you paper-skinned nitwit! Listen to me, you've been walked all over your entire life. Aren’t you ready to take charge, and change that?! Hahahaha!

O’Malley: Good! Good! Hahahaha! Then trust me, and together, we will rule this galaxy and-

Caboose: (over radio) Church, are we still talking on the radio?

Simmons: What, no! Come back! I said I was ready! Noooooooo!

Grif: (walks in) Hey, this is just like that time with your dad!

Cut to Blood Gulch, O'Malley returns through the air to Caboose via radio

O'Malley: Muhahahahaha! 'Cause I'd love to talk on the radio. What? What am I doing in this idiot?

Church: (groan) Crap. Sarge, I need you to do me a favor.

Mental Grif: Ah, it's Tex! Run away! (he along with the crew run away)

O’Malley: Well, look who it is! Hahaha.

Tex: I don't wanna fight you. I wanna talk.

O’Malley: Oooh! Hahahahahaha! It appears you're finally ready to play our little game. Very well. Let's talk, Tex. Assuming of course no-one will barge in here to force me out of this-

O’Malley: (groans) I can’t help but feel I set myself up for that one.

Donut appears on the podium

Donut: Gentlemen and gentlemen, please welcome the man of the hour: Franklin. Delano. D-D-Donut! (crowd cheering and clapping) Thank you! Thank you! The pleasure's all mine!

O’Malley: Oh, dear God. Please tell me I'm not where I think I am.

Donut: Well, hey there, Omega! Welcome to my Lightish-Red Head!

O’Malley: Do not. Ever! Call it that again!

Donut: You got it, buddy. The cool kids all call it the “Donut Hole”, anyway!

O’Malley: Then my first order of business will be murdering the “cool kids”.

Cut to Blood Gulch where Donut was possessed by O’Malley

O'Malley: Wuhuhuhaa, huha! No! It's my body! It's my choice! And another thing: why do I do as much work as you guys, but I only make ninety-two percent-

Tex beats Donut in the back of the head and knocks him down. Cut to Sarge’s mind where O’Malley pops in.

O’Malley: Blast! Where the devil am I now?

Sarge: Alright, soldier, I want rank and name on the pronto! We've got a war to win!

In the background, some Reds and Blues are fighting. The third Blue falls over.

Caboose: Alas, I have tripped!

Sarge: The blues are scheming, there's an evil A.I. on the loose, and senility keeps trying to overtake the hippocampus!

O’Malley: And who are they?

O’Malley: I'm really growing rather tired of this.

O’Malley: (sees nothing but a couple of crates) What? No characteristic decorations? No comedic interpretations?

Grif: Eh, who’s got time for that.

Simmons: You smell and you’re gross and no-one likes you and everyone likes meeee. (runs away)

Grif: (chases Simmons) Get back here, you little shit!

Cut to Blood Gulch, Grif falls asleep inside his armor

Doc: We're here, is anyone hurt?

O'Malley moves back to Doc

O'Malley: Anyone need to be killed? Huhuhahahahuhuhuh!

Church: I know that laugh! Nobody move!

O’Malley: Wraah! That’s it! I can’t take it anymore! I… I-uh… I-uh… Wait a minute, this place. It feels…familiar… (light appears) What’s this?

Church, who is in spirit form, comes down to earth and sees O’Malley.

Church: Uh, hey. So I guess you're like, what, here to take over my brain?

Church: (groans) Look, man. I’ve been running this mess all by myself for years. If you really want a piece of this bullshit, then by all means. I really cannot be bothered to care at this point.

Cut to Blood Gulch, Tex hits Church in the back of the head.

Omega in Church’s mind
Add a photo to this gallery 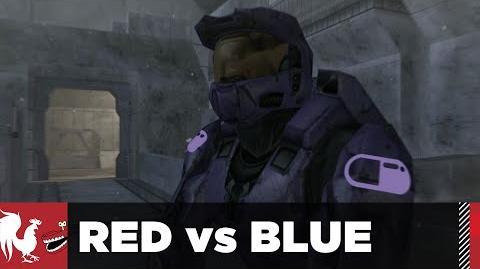 Retrieved from "https://rvb.fandom.com/wiki/Head_Cannon?oldid=146249"
Community content is available under CC-BY-SA unless otherwise noted.