Hate to Say Goodbye is the twentieth and final episode of Red vs. Blue: Season 9. It's also the 193rd episode overall.

As the Reds contemplate what they assume to be their last moments alive, Epsilon talks to Tex about the purpose of each iteration of his existence. Finally, he comes to the conclusion that to be at peace, he must say three certain words. Tex suspects that he wants to say "I love you," but instead he says "I forget you," choosing to let go of her memory and finally coming to peace with himself.

Meanwhile, Carolina is seen speaking with the Director. She accepts a task from him, the exact nature of which is concealed from the viewer. The Director warns her that it is very dangerous and far exceeds what is expected of her. Carolina remains resolute in her decision, stating that after all the Director gave her, she wants to be able to do something in return.

Back in the present, the Reds are alarmed when the sky seems to open up, revealing a large figure of Caboose. Sarge is distressed that Caboose might be God, while Epsilon deduces the nature of the tremors they have been feeling. He concludes that the tremors are not the result of the failure of the Memory Unit that en capsules this iteration of Blood Gulch, but instead a rescue mission. His theory is confirmed when Sarge appears alongside Caboose and orders him to extract Epsilon. Epsilon is alarmed at this and yells that he wishes to stay, as he finally is "at peace."

The extraction occurs nevertheless, and Epsilon assumes his white "ghost" form. Caboose and Sarge explain that they had to fight through entire military bases and armies to get to him. The remainder of the Blood Gulch group is implied to be engaged in a firefight. To calm Epsilon down, Caboose mentions that "she" helped them find him and needed him. Epsilon initially assumes "she" to be Tex before Caboose corrects him, saying that it is "the new lady." A blast door opens, revealing Agent Carolina, who is apparently both still alive and requests Epsilon's help in finding and killing the Director.

Fade in to tremors, and the sky literally splitting open like a seam, revealing the inside of a room. Cut to the Reds looking up from below

Sarge: Double rainbow? What is that?

Simmons: Some kinda crack. The atmosphere must be breaking apart!

Grif: Well, I'll be in my bunk. Gonna catch some Z's. See you guys.

Simmons: You're choosing to die while taking a nap.

Sarge: You know, in some weird way, I actually respect that. Adios, dirtbag.

More tremors, and the sky splits open further. Cut to Tex and Church at Blue base.

Tex: I guess this is it.

Church: Hey Tex, there's something I need to tell you. I think it's important that I say this.

Tex: Wait a second. Look, I can take the whole 'at peace with the world' thing, and I can even stomach all the 'accept your fate' stuff. But... just do me a favor, okay? Don't say goodbye. I hate goodbyes. I mean, we are space warriors, right? We should try to maintain some level of credibility.

As Tex is talking, the camera zooms in on Church

Church: No, no, no, Tex, no. I think I just figured out what the Director couldn't. And Alpha either. It was you, Tex, all along. See I thought- I thought we, made you. The Director, and the fragments... but that's not the case. You made us. When the Alpha was created, you just kinda came along for the ride. You gave the Director the idea that he could make something more. That he could split the Alpha up. Don't you get it? You were the memory. You were the key. You were so strong, you made a whole other person. God - he always wanted to find you. You know, to get you right. To just see you one last time. And he wanted me to be able to do the same. To find you in here or... just, go down another iteration. Figure out this little Tex problem. Figure out how to do it right. But now I know. I know how to fix all o' this. How to end it once and for all. It was so simple all along. I just had to tell you three words. Three words I wasn't capable of telling you before.

There's a tremor, and the camera pulls back so we can see that Church is now alone on top of the base

Church: I forget you. I'm letting you go. ...Okay world, do your fucking worst! 'Cause I sure as hell just did mine.

All of a sudden, a voice from the void, full of echo as if answering his request.

Real world Caboose: (off screen) It's opening! It's working!

Church: What the fuck was that?

Cut to a view of the sky, and giant, real world Caboose is looking down through the crack

Cut to the Reds

Sarge: Is that Caboose?

Simmons: Is Caboose... God? I mean, I can kinda see it now that I think about it. Sure would explain the fuck outta the platypus.

Sarge: Well, that's just great. Caboose is God. I guess that makes me the first person in the history of the Universe that doesn't wanna go to Heaven. Hhgh, great job Blue Team. You find a way to make everything suck.

Cut back to the sky, and giant, real world Sarge is shoving giant Caboose out of the way

Back down to the mini-world Reds

Simmons: Um, Sarge? What're you doing up there?

Sarge: What? Is that me? And more importantly, why am I talking with a Blue? Attention enormous version of myself! I order you to attack!

Church: No. NO! The memory unit isn't dying! This isn't the end of the world - it's a fucking rescue mission. NO!

Real world Sarge: Well get him outta there.

Church vanishes from inside the memory unit, and we cut to the Freelancer back story, with Carolina looking at the leaderboard

Director: Our next phase is ready to begin, Carolina. We will be asking you to do a great, many things.

Carolina: I'll do whatever it takes. You've given me everything. I would do anything for you.

Fade back to the present day, in a room where real world Caboose and Sarge were in, standing over the memory unit, as ghost Church fades into being

Church: No, no, dammit! Whyhyhy? Why did you do it?

Caboose: Church, you're alive! See-I knew it. See I told them! And she was right! We could get you out!

Sarge: Alright then, we're square Blue. We helped you get your shiny blue buddy out, so that makes us-

Church: But why would you do that? Why!?

Sarge: Well, clearly it wasn't to hear 'thank you'.

Sarge: Put you back? Buddy, we just fought through an entire military base to reach you. And now you wanna go back?

Caboose: She said we need you. She was the one who knew how to get you out.

Church: She? Who're you- who're you talking about, Tex? The real Tex?

A door slides open, with Carolina entering the scene.

Carolina: Hey there, Alpha. Been looking for you for a long time.

Epsilon and Tex's final moment together

Sarge looks down at Blood Gulch.

Sarge and Caboose bring Epsilon up to date.

"You're gonna help me kill the Director".
Add a photo to this gallery 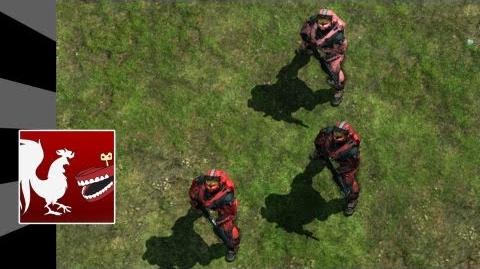 Retrieved from "https://rvb.fandom.com/wiki/Hate_to_Say_Goodbye?oldid=144976"
Community content is available under CC-BY-SA unless otherwise noted.