Happy Birthday is the sixteenth episode of Red vs. Blue: Season 10 and the 218th episode overall. It aired on September 24, 2012.

In Valhalla, Carolina tells the Red and Blue teams that they are leaving, much to their dismay. Sarge and Simmons return to Red Base and inform Grif that Donut is still alive and is living with Doc. Meanwhile, Tucker becomes more anxious and frustrated at how Epsilon seems to be getting closer to Carolina, while completely forgetting his original objective to spy on her. Epsilon becomes angry at this and tells Tucker that Carolina isn't like that and that she's been through a lot. He angrily storms off and asks Carolina if he can talk with her privately.

In the past, aboard the Mother of Invention, Tex and North are seen observing Carolina, who has been in a coma ever since the accident, from a medical observatory. York, who is also present in the medical room, has not left Carolina's side for several days. Tex informs North that South had filed a petition to receive one of Carolina's A.I., a move that disgusts him. Tex warns North that South is a "vulture" and to keep an eye on her in the future. She then confides that she now refuses to use her A.I., Omega, because she believes it to be too dangerous. She also tells him that she has not informed the Director about it and that she does not intend to do so.

North believes that Carolina's accident would bring a halt to the A.I. implantations, but Tex tells him that the Director has already scheduled Washington to be implanted next, leading North to believe that the Freelancers are nothing but the Director's guinea pigs. When Tex departs, Theta and North discuss the change in Tex's mood, both complimenting on their liking to her, although still finding her very scary.

Meanwhile, the Director and Counselor oversee Sigma, Gamma, and Omega torturing the Alpha, forcing it to create a new A.I. fragment. During the torture, a computer simulation of Alpha is trapped inside a room. The Director lies, saying that Washington and Tex have died on a mission that Alpha planned, which greatly distresses Alpha. Outside the torturing machine, the Director and Counselor transfer Alpha's actions into a storage unit. The Director then orders Sigma, Gamma, and Omega to log off, as they are not allowed to witness the fragment creation process. Gamma and Omega log off, but Sigma secretly disobeys and stores himself in a nearby security camera. As he watches, he sees the Director and Counselor bring in the Sarcophagus, which contains what appears to be an Engineer, or Huragok. The Director asks the alien to "fix" an A.I. storage unit, removing what was broken and giving birth to the newly created A.I. fragment: Epsilon.

Grif exits the Red Base, only to find Carolina standing by the door.

Carolina: Hey, you. Orange one. Where's the rest of your team?

Grif: How should I know?

Carolina: You don't report in to each other?

Grif: Oh yeah. I mean, I get reports.

Carolina: You might be the worst soldiers I've ever met.

Grif: Hey! I take offense at that! What do you mean, 'might be?'

Simmons and Sarge come walking up the river towards them.

She turns and leaves.

Simmons: Yeah. Donut nailed him into a board. He's staying here.

Grif: I thought Donut was dead.

Sarge: Yeah, we really need to stop saying that.

Simmons: He almost was. But Doc fixed him up, and now they live together. They say hi, by the way. Oh, and they baked us this banana bread.

Cut to a plate holding a loaf of banana bread, with a card reading, "Hope you like nuts! -Donut & Doc."

Grif: How nice! I'm gonna have to forget to send them a thank-you card. Hey, Simmons, when you said Donut nailed Lopez to a board...

Simmons: I mean with nails.

Simmons: No, no, I understand. I-I should have been clearer. It's my fault.

Carolina turns to Tucker. Washington is seen walking towards the other Warthog in the background.

Carolina: That's right. You got a problem with that?

Epsilon appears next to Carolina.

Epsilon: Uh, hey, Carolina, why don't you let me handle this?

Cut to the exterior of Red Base. A pulse shoots into the sky.

Epsilon: Tucker, what do you want?

Caboose: Is she pretty?

Tucker: What are you talking about?! You're supposed to be spying on her! She's the enemy, remember?! Us against them!

Epsilon: Hey, you don't know anything about her, Tucker! You have no idea what's she's been through!

Tucker: Since when did-

Epsilon: Look! Would you guys just get in the fucking car so we can leave already? Thank you.

Epsilon disappears. Tucker and Caboose glance at each other. Cut back to Carolina as Epsilon reappears next to her.

Carolina: What was that about?

Epsilon: Nothing. I need to talk to you.

Cut to North looking through a window into the recovery room from a medical observatory. Carolina lies on a bed while York sleeps sitting next to her. Tex walks up next to North.

MEDICAL OBSERVATORY. MANY YEARS AGO...

North Dakota: No idea. Doc's thought she would have woken up by now, but... she's still under.

Tex: How long has he been there?

North: He hasn't left her side yet.

Cut to Carolina and York. The camera pans down to show York's hand resting on Carolina's.

Tex: It's been days.

Cut back to North and Tex. Tex slowly walks away from North and begins walking around the room.

Tex: You know, your sister petitioned to get one of Carolina's A.I.s.

Tex: Yeah. Inappropriate's the word. So is vulture. Piece of advice, one soldier to another: you watch her.

North: Something's different with you.

Tex: You have an AI, right?

Tex: Take you some getting used to?

Tex: Well, let's say mine took a little longer than most. I'm not sure I want to depend on him.

North: You been, uh, pulling him?

Tex: Haven't used him in days.

North: Does the Director know?

North: They have to stop implanting now. I mean, after this...

Tex: Wash is up for surgery next.

North: You're kidding me...

Tex: Eh, time marches on. So does Project Freelancer.

North: Yeah. And lately, it seems like we're getting trampled in the process.

Tex leaves. A purple firework goes off in front of North, and Theta appears from it.

Theta: I think I'm starting to like her. At least better than I did before.

North: Yeah. She grows on you.

Cut to the inside of an unknown location, where bright blue lights shine from doors in the background.

The Alpha AI walks into view.

Counselor: (voice over) I am here.

Alpha: What- what happened? Is everybody okay?

Counselor: (voice over) Perhaps you should ask the Director.

Alpha: Why? Does- does that mean something happened?

Alpha: Director, please, what is going on?

Director: (voice over) There was another incident; security failed.

Alpha: (frantically) Is it the schematics? They're just- they're too complex. I just need more time to work on them.

Director: (voice over) It's not your fault.

Alpha: How can you say that? Of course it is! Was anybody hurt?

Director: (voice over) I am sorry. Yes. Washington and another died.

The room begins to shake violently around the Alpha. Cut to an unknown room, outside the Alpha's location, where the Director and Counselor witness the Alpha's actions from a video screen hooked up to a large machine. Pillars holding memory units can be seen by their sides. Cut to another view of the Director and Counselor. A memory unit is seen hooked up to the machine in front of them. Alpha yells from the screen.

Sigma and Gamma appear next to the memory unit.

Gamma and Omega disappear. Sigma, however, approaches the Director.

Sigma: Director, I would like to see this part of the process.

Director: You can't get near the artifact, it's too dangerous. Your job is done. Log off.

Sigma: As you wish.

Rather than logging off, Sigma enters a nearby video camera, in order to witness the upcoming event

Director: Get us another memory unit. A new one. Don't let it touch anything else.

Two soldiers wheel the Sarcophagus inside the room and proceed to open it. A multi-tentacled being emerges from inside.

Counselor: Move all other equipment away from it.

Director: That's right it's broken. We broke it, and we need you to fix it, just like you've done before. Here take this. Use this to fix it. Make it better; take away all that we broke, that's right. Put them in here.

The being repairs the memory unit.

Counselor: It is done.

The Director picks up the memory unit.

Director: Welcome to the world, Epsilon. Today, is your birthday. 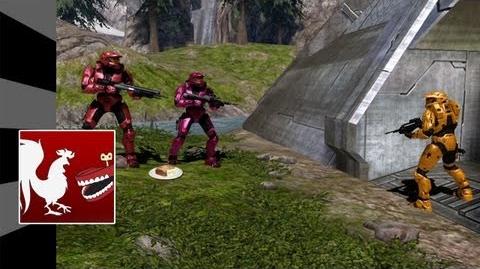 Retrieved from "https://rvb.fandom.com/wiki/Happy_Birthday?oldid=143955"
Community content is available under CC-BY-SA unless otherwise noted.