Hang Time is the eighteenth chapter of Recreation and 152nd episode overall.

As an Alien have Grif and Sarge under heavy fire, Sarge tries to prepare Grif for what might happen if one of them dies and the other lives. Epsilon-Church comes in, and the Alien bows to it, which Tucker says is because they worshipped the ancient technology like Gods. Church then knocks out the Alien with a crate and the rest of the temple is stormed by C.T. and his men. C.T. has Jones disable Epsilon-Church for capture, to which Smith and the other Aliens take offence to and begin a civil war against the human dig team. Meanwhile, Simmons, Donut, and Lopez find Meta's Warthog (which was invisible) but then are on a standstill when Simmons knocked himself out when he runs into it.

Back at the desert, C.T. escapes with Epsilon, and Caboose, Sarge and Grif get into the Warthog and give chase to C.T., pursued by two dig team soldiers, who are in turn pursued by several Aliens in a Prowler. Caboose shoots the EMP cannon at C.T. and misses, disabling their car and making them vulnerable to attack from the other soldiers in a Mongoose. Tucker attempts to jump at the enemy on a Chopper, but misses. With the cannon recharged, Caboose destroys the Mongoose.

In the temple at Sandtrap, with an alien firing a machine gun turret. Pans to Sarge and Grif, who are taking cover behind a corner and avoiding gunfire.

Sarge: Grif, listen. We may not both make it out of this.

Sarge: If you die, I think I'm prepared to live with that. I practiced it a lot. But there's also a chance you might survive and I won't!

Grif: (irritated) There'd be a better chance if you'd help me shoot! (starts to fire back at the alien)

Sarge: In case I don't make it, I can't help but think about all the future mistakes you're gonna make that I'm not gonna be there to scream at you about!

Sarge: I just want to let you know that at my bunk back at the base, there's a recorder deck. I’ve prerecorded about 57 hours of rants that should be applicable in a variety of situations. Whenever you're feeling good about yourself, I want you to play one. And always remember! Somebody hates you.

The alien ceases gunfire when Epsilon-Church floats above him into the room and looks down at him.

The alien immediately drops his gun and bows down.

Epsilon-Church: Um, the alien's being weird in here.

Tucker: No, no, I’ve seen this before. Some of the aliens worship this ancient technology. This one probably thinks Church is sort kind of god.

Caboose: (gasps) Maybe that's why your name is Church!!

Epsilon-Church: Oh, what's up, prayin' dude? How do ya' like me now? BIP-(smashes a box into the alien)-O!

Tucker: W-T-Fuck! Why did you do that!? I think that's taking advantage of your deity status, dude!

Epsilon-Church: Well, what good is being a god if you can't smite some people? Let's have fun...

C.T.: The shots came from down here!

Epsilon-Church: (floats back into the other room and flees) Good luck, guys!

C.T. charges in with another soldier and Smith.

Other soldiers and aliens are seen rushing in from a different entrance.

C.T. (to Tucker): You... do you have any idea how much trouble you've caused me? I should kill you right here.

The soldier behind C.T. pulls out a glowing pistol.

The soldier fires at Epsilon-Church, who yells some gibberish and is then knocked down.

Jones: Thanks! But it's actually pronounced Jo-n-es, sir.

Smith slugs Jones and he falls over. Smith continues to beat him.

The other aliens look at one another before firing at C.T.’s other soldiers.

Tucker: Dude, the aliens don't like their human buddies beating up on their religious artifacts.

There is an explosion. A soldier falls to the ground completely covered in needles. C.T. begins to flee.

Grif: That guy in brown armor grabbed him!

C.T.: (running out of the temple) Cover me until I'm clear!

A soldier on a turret is tracing C.T. C.T. tosses Epsilon-Church into his jeep. Other soldiers on the Elephant mount their own Mongooses. C.T. drives off. Smith exits the temple and walks around in search for C.T.

The troops on the Mongoose also drive off. Caboose and Grif charge out of the temple followed by Sarge.

Grif: There he goes! Everybody, get in the jeep!

Sarge: We gotta get that thing turned over!

Caboose: I'll do it! (flips it with ease)

Sarge: Wow, you are strong.

Grif: Is this thing gonna even start? (takes the driver’s seat)

Grif starts the engine and drives off as Tucker is seen running around the temple.

Caboose: Tucker, where are you going?

Tucker: There's no room for me! I'll be right back!

Cuts to Valhalla. Simmons, Lopez, and Donut are charging out from behind a clump of boulders towards Blue Base.

Simmons: Okay, look for anything that looks like a vehicle. It may have wheels... and/or seats.

Donut: Lopez is right, maybe we should panic.

Simmons: I'll try back here. It has to be—(crashes into a cloaked vehicle) Oh! (falls back) ...somewhere...

Donut: What the heck was that!? What? Invisible car? That's too cool.

Lopez: Te lo dije[Told you so.]

Simmons: I’ve never seen anything like this before either, Lopez.

Simmons: Okay, everybody, hop in. Let's get the fuck out of here.

Cuts back to Sandtrap and the team chasing after C.T.

Sarge: There he goes!

Caboose: Look out for the guys behind us!

The soldiers in the Mongoose chasing Sarge, Grif, and Caboose launch a rocket.

Grif: How can I look out for guys that are behind us!?

The three change directions. C.T. is now in front with his troops in the Mongoose trailing behind him. Sarge, Grif, and Caboose are in the back. The soldiers launch another rocket at the team but miss, twice. When they drive over a hill, the Mongoose tips and rolls over, falling behind. Aliens in a Prowler chase after them. C.T. takes a different route than Grif but is still in sight.

They fire at C.T., but then their Warthog afterwards is disabled. C.T. gets away.

The aliens pass by, still chasing after C.T.

Caboose: Look! Aliens! Well, they must be here to help!

Sarge: They're going after C.T.! Grif, get the engine started!

A rocket whirs by them.

They turn to their right; the soldiers on the Mongoose are in sight. Tucker screams from a distance, catching the soldiers’ attention.

Caboose fires at the soldiers. 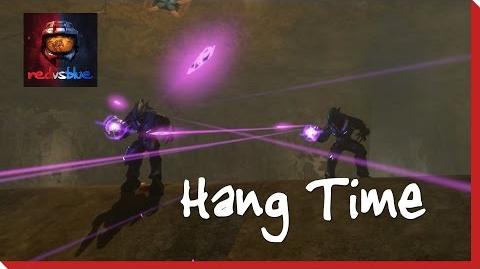 Retrieved from "https://rvb.fandom.com/wiki/Hang_Time?oldid=135746"
Community content is available under CC-BY-SA unless otherwise noted.