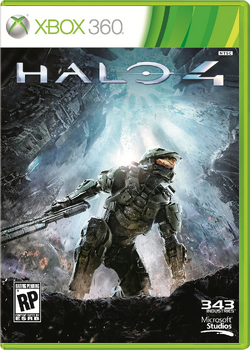 Halo 4 is a video game developed by 343 Industries. It is the first installment of the Halo "Reclaimer" saga and was released for Xbox 360 on November 6, 2012. Halo 4 made its first Red vs. Blue appearance in the PSAs Save the Date and Remember To Not Forget. It is first canonically used in the Season 10 finale, Don't Say It. In a popular gametype of Halo 4, known as Spartan Ops, there is a number of Red vs. Blue Easter Eggs, and an achievement, called Roses vs. Violets, worth 20 gamerpoints for finding them.

Retrieved from "https://rvb.fandom.com/wiki/Halo_4?oldid=141317"
Community content is available under CC-BY-SA unless otherwise noted.