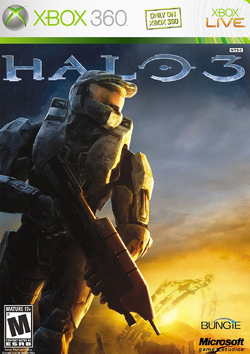 Halo 3 is the sequel to Halo 2, available on the Xbox 360. Halo 3 was used to film most of The Recollection saga and Season 10.

Halo 3 introduced a new feature in regards to Multiplayer; the ability to customize one's armor. Much like in Halo: Combat Evolved and Halo 2, a player can customize their character's armor color. However, in Halo 3, a player can now customize their character's helmet, shoulder armor, and chest piece. This feature makes characters like Caboose, C.T., the Meta, and others possible. Additionally, Halo 3 introduced a new weapon setup that allowed a character's secondary weapon to be visible when not held, typically mounted on their back or thigh.

Halo 3 also introduced two new features that would completely change the future of Machinima; the Forge and Theater modes. Using Forge mode, players could now use a built in tool kit to effectively build scenes from a selection of props and stage materials. The Theater mode, meanwhile, made for an improved method of shooting. Players could now record footage and replay it at will, allowing a single scene to be shot from multiple angles, as opposed to filming live.

Retrieved from "https://rvb.fandom.com/wiki/Halo_3?oldid=141318"
Community content is available under CC-BY-SA unless otherwise noted.