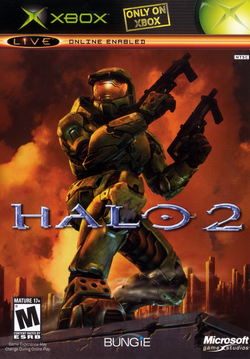 Halo 2 is the 2004 sequel to the popular video game Halo: Combat Evolved for the Xbox console developed by Bungie and published by Microsoft Games Studios. A PC version of the game enhanced specifically for Windows Vista was later released.

Due to the impact created by Red vs. Blue and many similar machinima, a number of features were introduced in Halo 2 specifically for the sake of filming machinima, along with new features that would become standard for future titles. Red vs. Blue used the Xbox version starting with Season 3, and the PC version from Season 14 on, except for in Season 17, where the Xbox One version from The Master Chief Collection was used.

On its tenth anniversary, the game received an enhanced remake for Xbox One, Halo 2 Anniversary, as part of the Master Chief Collection.

Retrieved from "https://rvb.fandom.com/wiki/Halo_2?oldid=141965"
Community content is available under CC-BY-SA unless otherwise noted.