"It was worth it."
—Sarge in Relocated: Part Three

Throughout the series, Grif (and different variations of him) gets injured and harmed several times, mostly by Sarge. So much so that his misfortunes have become a running gag. This is a list of Grif-related injuries.

Grif has suffered from many near death incidents, many of which Sarge has described as "worth it." Throughout The Blood Gulch Chronicles Grif is injured numerous times. Some notable ones include:

Grif is put on fire.

At Valhalla, Grif was sent to the top of the Red Base in order to try and find out what was wrong with the Red Army's electricity. On the top, a grenade went off and Grif was blown high into the air.

Grif high in the air

Grif is falling towards the ground

In the episode, Why Were We Here?, Sarge intiates "Emergency Plan Delta" and shoots Grif with his shotgun. Donut initiates "Emergency Plan Traitor Simmons Number 11" at Sarge's order and shoots Grif with his Battle Rifle, but Sarge says that Donut executed the wrong plan, to which Donut replies "Where am I gonna get a steamroller?" It is revealed that all of the Red Team's emergency plans begin with shooting Grif.

When Tex attacked Red Base in Episode 11, Grif is knocked out instead of killed as "he is too good looking to die." In the episode This One Goes to Eleven, Tex makes seven attacks directed towards Grif's balls. In True Colors, two Tex drones punch and kick him in the same area.

Grif continues to get injured during The Chorus Trilogy.

Sarge often imagines murdering Grif or having him killed. One example is when he tells the Blood Gulch Crew about his plan to infiltrate O'Malley's fortress and suggests using Grif's body to slow down the giant windmill. Another example is thought back to when the Reds deleted the Blues from the Freelancer command database. He is also killed by his sister in an alternate ending to Episode 100. In "Head Cannon", inside Sarge's mind, there is a pack of Grifs who Sarge shoots with a Rocket Launcher. In "Mr. Red vs. Mr. Blue", Grif is shot in a re-enactment of Mr. Orange being shot in the same way as in Reservoir Dogs.

Sarge imagines Grif's death when they were deleting blues. 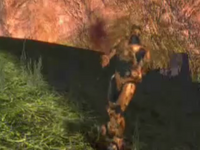 Grif is killed by his own sister (alternative ending 1).

Sarge kills multiple Holographic Grifs in the holographic simulation room that he and Lopez designed.

During D.I.Y., Sarge moves a large dumpster into a series of Gravlifts, injuring Grif and he also set Grif on fire by raising the temperature when Grif was in his "quiet place."

Grif has things thrown at him

During Beta Complex, Sarge shoots Grif with a sniper rifle, has the rest of his team teabag Grif, and then lastly throws Grif through the Man Cannon.

"Grifball is the ideal sport. It has all the elements of classic gamesmanship: Grif pain and suffering, Grif humiliation and defeat, and Grif multiple deaths."
—Sarge in Rules of the Game

In the Halo multiplayer game of Grifball, the ball carrier becomes "Grif". The Grif then dies multiple times due to being the target of all the enemy players or dies when the bomb explodes after scoring.

Grif killed with an Energy Sword

Bomb explodes next to Grif

"Now, if the energy shield HAD been there, Grif would've been fine."
—Boomstick in Meta vs. Carolina: Dawn of Awesome

During Meta vs. Carolina: Dawn of Awesome, Boomstick is shown to use Grif as a test subject when demonstrating the effects of the combatants' special weapons and armor. Grif is shot with the Brute Shot, blown up with a tank shell after his Bubble shield dissipates, shot with a Battle Rifle, and later whacked with the Brute Shot again.