Temple calls up Sarge to his induce and informs him of the completion of Loco's machine, although Sarge isn't excited about it. Temple then promotes Sarge to "Super Colonel", greatly pleasing him. Surge soon enters and informs the two that they have found an intruder on their surveillance cameras, which turns out to be Grif, who has broken into the underwater base and sneaks around the area indiscreetly. He is soon captured.

Temple brings Grif to the brig and imprisons him with the rest of the Reds and Blues. While Simmons is surprised to see Grif again, Tucker is annoyed at his presence, believing he had failed to rescue them. After locking up Grif, who apologizes for his selfish behavior on finding Church, Temple reveals the full recording of Church's "distress" speech from earlier. It turns out it wasn't as distress call for help, but an old recording from Blood Gulch Church made to Command after Tucker and Caboose blew up a toilet that Temple and his crew edited.

When Caboose still doesn't understand, Temple explains that they tricked the crew in order to find them and that Church is not coming back. Temple also chews out the Red and Blues for having the topic of death and loss very loose on Caboose all these years. Temple and his crew leave the imprisoned Reds and Blues, with Buckey taunting Tucker, having taken his sword. Temple then tells Sarge that they must now deal with Dylan.

Caboose is stunned and heartbroken over the truth that Church is actually gone but Tucker reassures him that they will stop Temple. Grif tries to chime in but Tucker snaps at him for ruining their only chance of escape, only for Grif to reveal he planned on being caught and was more of a distraction. The real plan is soon revealed as Locus finds the room where Carolina and Washington are imprisoned and proceeds to free the two from armor lock.

Cue Sarge walking up to Temple. Temple is on his computer.

Sarge: If it's about Simmons, sir, I've-I've already given him a stern talking to. Perhaps in a few days, we can give him another chance.

Temple: Yeah, that's not happening. There's.. there's just no time! You understand. Our machine is finished, and it's time to see if it works.

Temple: Sarge, I really called you in here because.. I wanted to see how you were holding up. I-I can only imagine, this must be a.. really difficult time for you.

Sarge: Well, it ain't been no cakewalk! But I didn't reach the rank of Colonel by only following the orders I liked.

Temple: Gah, you an inspiration to us all. Which brings me to my point; I'm promoting you!

Temple: The warhead will need loyal and capable leaders. If I had a dozen like you, Sarge, the UNSC wouldn't stand a chance!

Sarge: Super Colonel Sarge! Ha-ha! Boy, that rings like a bell, don't it?

Surge walks up to the two, laughing.

Surge: Temple! You need to come see this.

Temple: What is it?

Surge: We have an intruder.

Temple: What!? Why haven't you sounded the alarm!?

Surge: [laughing] It's not that kind of situation, sir.

Cue footage of Grif sneaking around the base, crouching.

Temple is watching the footage, along with Surge, Buckey, Cronut, Sarge, and Gene.

Temple: How long has he been at it?

Surge: A while. He's been goin' 'round in circles. [laughs]

Buckey: The hell is he thinking?

Cue to Grif, sneaking around the base, crouching.

Grif walks next to a table with Fish on it, a Metal Gear Solid noise plays as an exclamation mark appears above his head and he turns to it.

Cue back to the Blues and Reds + Sarge.

Gene: What the hell is he doing now?

Sarge: Snacking. It's amazing he's made it this long!

Cronut: He's going for the vent! [shudders] That's gonna be a tight fit.

Temple: Alright, alright, someone butter him up and pull his fat ass out of there.

Sarge: You gotta use something other than butter, though. Otherwise, he'll just lick it off.

Cue to Tucker, Caboose, and Simmons, imprisoned in their cells. Temple and Loco walk in.

Temple: Howdy everyone! How are our fine guests doing?

Temple: Charming. Well, gang, I thought we should have a little chat before I bid my final adieu. After all, our business together isn't quite finished, is it?

Tucker: You're god damn right it's not.

Simmons: Oh-ho, if you think for one second that you're gonna get away with this--

Temple backs up as Buckey brings out Grif.

Caboose: Simmons! I mean Gri- y'know, is it a bad time to tell you I'm colorblind?

Simmons: You got my message!

Temple: It can wait.

Grif: No! Not another minute! I'm sick of waiting. I am sorry! Everyone, Simmons, I'm sorry I left like that. Tucker, I'm sorry I didn't come with--

Grif: Caboose, I'm sorry I didn't help you find Church. That makes me a bad friend.

Caboose: It's okay! I know he's still out there.

Temple: Really? You think so?

Temple: But I don't want to. Caboose, would you like to hear Church's full message? We got the whole recording right here. He talks about you.

Loco plays the message over the speakers. A beep is heard.

Church: Control! Control, do you read? This is Church from Blood Gulch Outpost Alpha, over. If you're getting this it's an emergency! You've gotta send a plumber as soon as you get this, please! Tucker and Caboose—eugh—they flushed a damn grenade down the shitter and it exploded! And it's everywhere, Control! It's coming out of the god damn walls for Pete's sake. Send help please. We need—I need—a plumber. Fuck! And some god-damn new recruits too, because I'm about to murder these two! Church out.

Temple: It's crazy what you can do with editing software these days. What's the matter, Tucker? Cat got your tongue? I'm curious; do you all remember that? Granted it happened a long time ago in a Gulch far, far away, but still! It must've been a memorable episode.

Caboose: I-I don't get it is he-is he back in Blood Gulch?

Temple: [angry] No! Forever! How fucking stupid are you?!

Temple: What-the-fuck-ever, he's an adult, okay. Maybe if you all didn't treat him like some big baby, he would understand something as simple as "death". As "dying" and being gone "for-e-ver".

Tucker: I'll give him a real-world example if you unlock this fucking cell!

Caboose: So you changed his message so we would come looking for you?

Temple: Bingo. Thank you. I had help, of course. Loco's the one who did the scrambling.

Temple: No, you can't. This is goodbye. We are leaving. Onward, to victorrry! Adieu, adieu, farewell.

Temple and Loco walk out.

Temple: [under his breath] Heh heh, nailed it.

Buckey: Hey, Tucker! Thanks for the sword, bro!

Tucker: It won't work for you, asshole.

Buckey: It's still got uses. I think your mom will love it, if you know what I mean. A-boom-chicka-wah-wah.

Buckey laughs as he walks out.

Cue Sarge and Surge walking, they run into Temple, who's also walking.

Sarge: What was all that about?

Temple: Oh, not much. Went in to offer our guests every comfort and they chewed me out. But we'll treat them well, Super Colonel Sarge.

Temple: Uh, I need to talk to you about something else.

Temple and Sarge walk away. Surge is left alone.

Temple: It's about that reporter..

Cut to Tucker and Caboose in their cell.

Tucker: Sorry, Caboose. Not... this time.

Caboose: But, but... I never got to say goodbye. Or, thank you for being my friend.

Grif: We all will.

Grif: Ease up dude, I did my best.

Tucker: Your best!? You fucking botched our only chance of escape!

Tucker: You busted in here, made an ass of yourself, and got caught! What do you call that?!

Cut to where Wash and Carolina have been armor-locked.

Carolina: Heh. I believe in you, Wash.

Wash: My kingdom.. my kingdom to scratch my nose.

Carolina: At least.. you.. didn't get frozen.. in a god-damn yoga pose. I'm gonna need a week at the chiropractor when we get out of here.

Wash: [on the verge of sleeping] Just a little rest.

Locus's voice: You don't get to rest, Agent Washington.

Locus appears in front of them both.

Carolina: Wait. I see him too.

Wash: Are you here to kill us?

Locus: [sighs] I sure get that a lot. 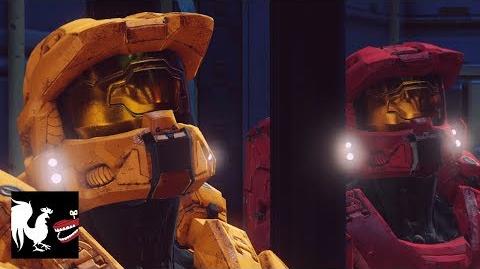 Retrieved from "https://rvb.fandom.com/wiki/Grif_Does_a_Rescue?oldid=146566"
Community content is available under CC-BY-SA unless otherwise noted.