The Gravity Hammer is a weapon featured in Red vs. Blue and is mainly used by Freelancer Agent Carolina.

The hammer's first appearance in Red vs. Blue is in the Rules of the Game PSA, as one of the main weapons to use to kill Grif in order to play Grifball. At the end of the PSA, when Caboose picks up the Grifball and turns into Grif, Sarge immediately picks up a Gravity Hammer and swings it at Grif before the PSA ends.

The weapon makes a canon appearance in the Season 9 episode The Sarcophagus, being used by Carolina to defeat Sharkface. In the Season 10 episode Heavy Metal, Carolina notices it when about to disembark from a Pelican. She then grabs it and uses it to eliminate many Insurrectionists. Following the battle, Carolina discarded the weapon before the team left for Bone Valley.

In The Shisno Paradox, a particularly powerful hammer is forged by Burnstorm to seal Chrovos' prison, who calls it "The Hammer" to highlight its status as an ultimate weapon. 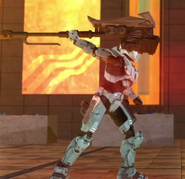 Retrieved from "https://rvb.fandom.com/wiki/Gravity_Hammer?oldid=146397"
Community content is available under CC-BY-SA unless otherwise noted.