Getting Debriefed is the fifteenth episode of the fourth season and the seventy-second of The Blood Gulch Chronicles.

Inside Red Base, Sarge attempts to bury his disgust and hatred toward Grif in an attempt to consolidate whatever soldiers the Reds have left to fight the war with the Blues. Sarge's own personal disdain for Grif still leaks through as he disclosed that he has attempted to murder Grif countless times while everyone was asleep. Outside the base, Simmons — still mostly blue — and Donut have a verbal fight. Donut, still under the impression that Simmons is a Blue soldier, refused to allow Simmons to pass without being shot at. Eventually, Sarge and Grif come out to see what's happening and acknowledge who Simmons really is. Simmons, though still looked down upon by Sarge for his apparent betrayal, still wants to pass along Blue Army info to the Reds.

Caboose, Tucker and Andy return to Blue Base. According to Tucker, Tex is still pursuing Wyoming, the quest was a failure, and the Alien died. Frustrated that the quest failed and that Tucker did not immediately reveal that Wyoming is still alive, Church orders Tucker to report those kinds of events immediately in future.

Fade in to Grif and Sarge talking

Sarge: Yes Grif, I think it's time we buried the hatchet. Started workin' more closely together.

Sarge: As you know, I've never liked you. Not even a little bit.

Sarge: You've always been lazy, insubordinate, and I suspect that underneath that helmet, you're probably extremely ugly to boot!

Sarge: Over the years I've been so disappointed in your work, I've slowly stopped giving you things to do. Most days, I forget ya even exist.

Grif: Yeahhh, it's been a good run.

Sarge: But I think we all need to realise that Simmons is not comin' back. Red Team is just gonna have to make do with the few worthless soldiers we have left.

Grif: Wait, didn't this start out as a pep talk?

Sarge: We may never know why Simmons left-

Grif: Yeah, maybe he was overwhelmed by all the positive reinforcement you give out.

Sarge: But the fact of the matter is we're at war! If we're gonna win this thing, we need to work together! We need to put aside our disgusting laziness and our constant attempts to kill each other in our sleep.

Grif: I've never tried to kill you in your sleep.

Sarge: Dammit Grif, this is a compromise. I realise I'm gonna have to give up some things as well.

Cut to Simmons walking up to the Red base, with Donut standing on the roof looking down

Donut: Halt! Who goes there?

Simmons: Donut, it's me.

Simmons: I wanna talk to Sarge. I just found out some info. Wait, why'm I answering your questions?

Donut: I said hold it!

Donut: Sarge told me not to let anyone in the base, and I'm pretty sure "anyone" includes the enemy.

Simmons: I'm not the enemy.

Donut: Oh please, you're dressed in blue! F.Y.I. there's kind of a theme around here. You're blue, I'm red.

Donut: I have a gun?

Simmons: Okay, okay. I only dressed like this to trick the Blues.

Donut: You helped the Blues.

Simmons: And fooled them.

Donut: You knocked Sarge out. Twice!

Simmons: Once again, Donut, to fool the Blues!... And to work out some unresolved issues with father figures, but look, just go ask Sarge, he knows it's me. Hell, even Grif knows it's me.

Donut: Oh sure, everyone knows who you are but me.

Simmons: No, the Blues don't know either.

Cut to Church and Sheila

Church: Hey Sheila where'd that Simmons guy go that was spyin' on us?

Sheila: I don't know, why don't you go ask your new jeep?

Cut back to the portcullis

Sarge: What's all this racket?

Donut: There's an enemy tryin' to get in to the base.

Sarge: ...Where, behind Simmons?

Simmons: He means me, Sir.

Donut: Ohhh, Simmons. Why didn't you tell me it was you?

Simmons: Donut, I did tell you it was me.

Donut: Well you didn't say it was you, you just kept saying "I'm me."

Simmons: I am me.

Simmons: That's because I'm me.

Grif: And thus ends another meeting of the pronoun club. Same time next week everybody.

Simmons: Well, now that we have that straightened out, I have some important information.

Sarge: I don't want to hear it, Blue.

Simmons: What? This is valuable information about the war.

Sarge: There's no such thing as valuable information, from a traitor!

Simmons: But Sir, I only did that because no one would believe me about the tank.

Donut: Sarge, Simmons has issues with his father that he displaces on you.

Simmons: No Donut, that's why I punched Sarge in the face. I left the base because I wasn't fulfilling my undying need to please other people.

Sarge: Alright, enough. The next person who tells me about Simmons' feelings is gettin' Court-Martialed.

Grif: Simmons likes to go in the bathroom and cry while he punches the mirror. Well, I'll go pack my bags... Nice workin' with you guys. Good luck with the Blues. It's been real.

Cut to Tucker and Caboose who's carrying Andy approaching Blue Base

Church: Oh, look who's back, the conquering heroes, what's up guys?

Church: Yeah you know I... I probably didn't even have to ask that last question, did I.

Andy: Eh I wouldn't say "failed," but these guys definitely screwed it up royally.

Tucker: What? We didn't do anything!

Andy: Exactly. You let Tex do all the work and got the alien killed.

Tucker: Yeah, but doing nothing is what we do. So, technically we didn't screw anything up.

Caboose: It's true, I have a first place ribbon in doing nothing. It's the same ribbon as last place. It's purple.

Tucker: She's fine. None of us are that lucky. She chased after Wyoming.

Church: Tucker, why didn't you tell me this?

Tucker: Tell you when? We just got here.

Church: Yeah but you've been wasting my time gabbing about your stupid failed quest.

Tucker: This conversation's stupid, and I'm hungry, where's the food.

Church: Listen, any time you have new information for me, just tell it to me as quickly as possible. Okay?

Tucker: Don't we have anything to eat in this place? 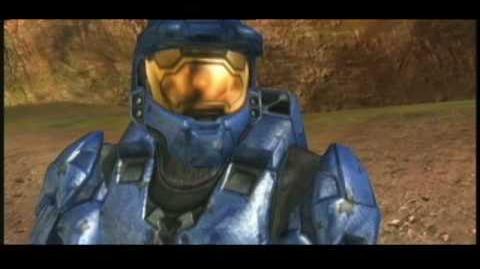 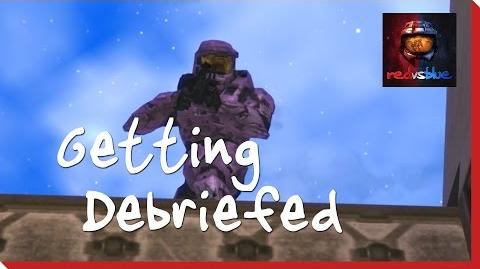 Getting Debriefed - Episode 72 - Red vs. Blue Season 4
Remastered
Add a photo to this gallery
Retrieved from "https://rvb.fandom.com/wiki/Getting_Debriefed?oldid=135658"
Community content is available under CC-BY-SA unless otherwise noted.