In the Capture Unit, Epsilon-Church has begun another scenario where he and the Reds and Blues are in Blood Gulch in an effort to reunite with Tex. He gets to the point where Tucker is boasting about using their brand new Scorpion tank, along with how they can use it to pick up chicks. When Epsilon asks how they's going to do that in the canyon, Tucker reveals that there's an entire base full of girls in the canyon, confusing Epsilon, especially when Caboose says that the general that grabbed the blue team's flag might like him. Going on his own for a bit, Epsilon tries to recount everything he got correct in this scenario, and realises that while he got both his team and Blood Gulch correct, the red team are now females, as shown when Sarge appears with a female body ready to take him prisoner. While Epsilon is disgusted over this revelation, Female-Sarge knocks him out.

Coming to inside a huge building, he finds Female-Sarge and Female-Simmons looking over him, revealing that what they're in is a renovated red base that they got after calling Command. After, Female-Grif comes out after getting awoke by her nap, and Female-Donut came in saying that she could not find headlight fluid, but found the blue team's flag. Suddenly, Tucker and Caboose arrive at red base, but not to rescue Epsilon, only to get with the red team. However, when Tucker wanted to hit up with Female-Grif as he never done it with a plus sized girl, she angrily shoots him in the lap. Eventually, the red team has captured the entire blue team, and Female-Sarge orders Female-Lopez to watch guard. However, Tex soon arrives and knocks out Female-Lopez, but its soon revealed that Tex in this scenario is a man. While Epsilon is okay with that, he decides to end the scenario immediately.

It then cuts to another scenario, where Tucker now hits on Church with an offer to ride the tank. While Epsilon is confused about that, he soon finds out that he turned himself into a female, much to her frustration.

Vic: So, remember when everybody thought Church died and became a ghost? Right! Well, turns out he's actually an AI program. Spoiler alert! Anyway, he eventually transferred himself into a memory unit with the hope of reuniting with his ex-girlfriend Tex, who was also a computer person thing it turns out. Yeah, love's complicated like that I guess. Anyway, Church tried to relive his own memories over and over again, just hoping that one day, he could find Tex, and they'd be together, and live happily ever after. Only problem is, sometimes you don't exactly remember everything right. Second spoiler alert.

Tucker: I said we could blow up the whole god-damned world with this thing!

Epsilon: What? Are you talking about Sheila?

Epsilon: The tank. I - Oh wait, right, that doesn't happen until later. Sorry.

Tucker: ...You named the tank Sheila?

Tucker: You know what? Forget what I said. We can definitely pick up chicks in this thing. Probably two or three chicks apiece!

Epsilon: Oh man, listen to you. What're you gonna do with two chicks?

Tucker: Church, it's like I always said. Women are like Voltron: the more you can hook up, the better it gets!

Epsilon: And what chicks are we going to pick up exactly?

Tucker: What are you, the rookie? We've got a whole base full of them right here in the canyon!

Caboose: (emerging from the base) Hey! Just wanted to let you know the General stopped by and picked up the flag! Also, I think she likes me!

Tucker: Yeah, okay, whatever, moron! (To Epsilon) Seriously dude, what's with this guy?

Epsilon: I, uh, I gotta go check about something.

Epsilon starts going down the canyon towards the Red Base.

Epsilon: Alright, don't panic, just think. You're reliving your memories, you're here to find Tex. As long as you didn't misremember anything, should be good. Tucker's fine, Caboose is... the way he is. Canyon seems intact. Which means the only thing I could have possibly gotten wrong is...

Epsilon turns around to face a female version of Sarge.

Sarge: Stow it, Blue. Thought you could sneak up on our base, did you? Well, you gotta get up pretty early in the morning to pull one over the Red Team, and sunshine, it looks like you overslept.

Sarge: Yes. I can surmise that being swiftly outmaneuvered by your enemy must be...

Epsilon: Oh... this is so wrong! (half-laughing) This is so fucking wrong!

Sarge: Hey, do not interrupt me while I'm berating you! Now hurry up and come with me!

Epsilon: Well, you know, never made a big deal about it before.

Sarge knocks out Epsilon. Cut to inside a different facility, with Epsilon lying on the floor.

Epsilon: Ugh... Please tell me that was the world's worst fever dream.

Simmons (who is also female): The prisoner is awake, ma'am!

Epsilon: Ugh... I need mental bleach. Or just regular bleach. I don't want to live in this world...

Sarge: Thanks for the sit-rep, Private Simmons. How are upgrades on the defense work coming along?

Epsilon: Where am I? What is with all that noise?

Sarge: Renovations to the base, of course! What did you think, we were just standing around all day over here, yammering about the mysteries of life? We've got a war to win, son, and I intend to -

Epsilon: This is Red base?! It's freaking huge!

Sarge: Simmons, if he interrupts me again, shoot him in the lap.

Sarge: Yep, good ol' Blood Gulch Outpost number one! Seemed like it needed a something extra, is all. So we excavated new sublevels, set up perimeter defenses, added a state-of-the-art entertainment facility, planted an herb garden, installed a Jacuzzi...

Epsilon: Where'd you find time to do all this? Where'd it come from?!

Sarge: Oh, not too long. When did we get started, Simmons?

Sarge: Hmm. Seemed longer. As for the supplies, we just put in a requisition with Command.

Grif (also female): Hey! What's with all the shouting? I'm trying to get some beauty rest up here!

Simmons: Yeah, like rest is gonna fix that face.

Epsilon: Oh, God. Just put a bullet in my head.

Sarge: Private Grif, you're supposed to be calibrating the power couplings!

Grif: I know, that's why I told Donut to do it once she got back with the headlight fluid. Delegation, bitch!

Simmons: The dining room?! Donut, don't you know anything about interior decorating?! That cerulean flag is going to clash with everything in this base!

Donut: Man, who cares about decorating? If it were up to me, I'd get down on my hands and knees and I'd tear up all the carpet in this base.

Everyone stares at her.

Donut: What's with the blue guy?

Epsilon: I just... I - I know what I should have expected from you, I was just not ready for it.

Tucker: (off-screen) Helloo, anyone home? Damn, this place is a lot bigger on the inside!

Epsilon: Tucker? Caboose? The hell kind of rescue operation is this?!

Red Team and Epsilon: What?

Tucker: Hey baby, I've never been with a plus-size girl before, and I bet you've never hooked up in an armored military tank. How about we scratch a few things off our bucket list-

Sarge: Excellent work, Private Grif! We may make a respectable soldier out of you yet.

Sarge: Indeed, is does, Simmons. Radio Command immediately, and inform them of the good news.

Simmons: Yes, ma'am! And might I compliment you on your decisive victory?

Caboose: So... What happens to us?

Sarge: Good question, dirtbag. Ladies, let us discuss the terms of the Blue Army's surrender. (Turns towards Lopez) Lopez. (Slowly) Lopez. Keep an eye on them.

Epsilon: This cannot possibly get-

Loud explosion. Lopez shoots around. Tex shows up behind her and assassinates her.

Tex: (male voice) Well, this seems to be where all the action is.

Epsilon: I - uh, Tex, what's up with your voice filter?

Cut to black, back to the initial scene.

Tucker: I was saying, how about you and me go for a ride in this tank? I can show you the cannon.

Camera pans back, revealing that Epsilon misremembered his own gender as female. Cut to black. 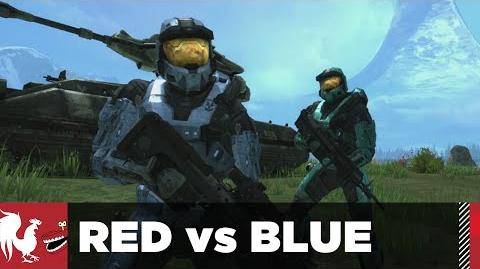 Retrieved from "https://rvb.fandom.com/wiki/Get_Bent?oldid=140591"
Community content is available under CC-BY-SA unless otherwise noted.