Gamer Etiquette is the third PSA of Red vs. Blue: Season 9.

Sarge and Church give the lowdown on proper gaming etiquette.

Fade in to Sarge and Church

Sarge: And I'm Sarge, from the same show.

Sarge: You know, back in my day, multiplayer gaming used to be a little different.

Church: You know in the modern days of gaming, you don't even have to know a single person to get together an awesome match.

Sarge: However at some point in your life, you'll find yourself sitting down on a couch, next to some other people for some good ol' fashioned gamin'.

Church: And these in-person encounters can be rather awkward, if you're not prepared.

Sarge: That's why we would like to present our handy guide, to gamer etiquette.

Church: The place where you are most likely to run into problems, is the dreaded controller handoff.

Sarge: When your friend hands you a controller, you are likely to run into a few possible problems. The first being what's known as, the hot'n'wettys.

Church: This may be a level of intimacy for which you are unprepared.

Sarge: To protect yourself, we recommend packing a set of fingerless gloves to any LAN party. They're fashionable, and they leave your fingers free for successful fragging.

Church: And more importantly to prevent the unwanted transfer of human warmth from your friend, to you, thus fueling your body using his metabolic process, which when you think about it, is kind of gross.

Sarge: When you say it like that, it is gross.

Church: And also so you don't have a situation where you get covered in your friend's moist hand slime.

Sarge: Also it's possible that your friend will let you borrow their own controller to play the game. This may also cause an, unfortunate situation.

Sarge: Or he can saddle you with the extra small controller made of some kind of plastic/paper hybrid, with four triggers and rhythm game attachments.

Church: But even in a situation where the controllers are the same and equally as good, you can still encounter some uncomfortable situations.

Sarge: The worst of the scenarios, is the dreaded inversion discovery.

Church: For instance let's just say you like your controllers to be the normal setting, where up is up and down is down.

Sarge: And why wouldn't you?

Church: Sarge, we're not here to pass judgment. But let's just say your friend, prefers an inverted controller scheme, where down is up, and up is down.

Sarge: What is with some people?

Church: Sarge... Now, discovering that your friend prefers the opposite controller scheme, can be one of the strongest tests of any friendship.

Church: The important thing, is to not react too quickly. ...This is no good for anyone.

Sarge: Try to take some time, and contemplate what you've learned about your friend, and yourself. Maybe the way you've looked at the world has been wrong all this time.

Sarge: Most games aren't flying games though. What about driving games?

Church: Driving games don't have an up and down.

Sarge: Yeah, but they could.

Church: Then they would be flying games!

Sarge: What about FPSes? You don't look up in real life to look down.

Church: You don't use a controller in real life!

Church: Oh hey Sarge? This is for you. Check it out buddy.

Sarge: Ah, flipping me off, huh? Why didn't you point your finger down? That would make more sense! Hah!

Sarge talking about the possible problems of handing over a controller

“The extra small controller made of some kind of plastic/paper hybrid, with four triggers and rhythm game attachments”

Inverted controls is not good for anyone

Sarge talking about contemplating your friend

Sarge talking about contemplating yourself

Sarge talking about contemplating the world 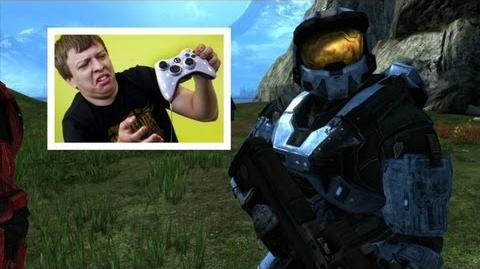