Free Refills is the second chapter of Red vs. Blue: Recreation and the 136th episode overall.

The episode opens with Caboose talking about his adventures in Blood Gulch to Epsilon. At Red Base, Sarge tries to find Grif by shouting his name. When Grif answers Sarge asks him where Simmons is, but Grif refuses to answer so Sarge decides to find Simmons himself.

Inside the simulation room with Sarge approaching Simmons. Sarge asks what Simmons is doing, and Simmons reveals that he is working on Sarge's new warthog weapon. Sarge asks if Simmons could consider him to be a "friend," and that Simmons can do the same in return. Then Sarge suddenly appears at the top level of the simulation room, demanding what Simmons is doing. Simmons was really just talking to a hologram of Sarge. Caboose is then seen inside the Blue base talking to the Epsilon unit again, with Donut standing behind him.

Fade in to Caboose. He is talking to the Epsilon unit.

Caboose: Then there was the time we got a tank. Of course no one knew how to drive it, but then there was a big fight, my team got in trouble. So I talked to the tank. She was really nice, you're really gonna like her. Anyways, the team was in trouble, and I had to use the tank to drive out there to help them. ...Well, help most of them. ...Erm, some of them. ...Okay, let's just say this: I drove the tank, and some people got helped... and some other people didn't get helped. ...Details aren’t really important.

Cut to the Red Base. Sarge is running around, searching through multiple areas of the base for Grif. He ends in front of the Warthog.

Sarge: Grif! Where the hell are ya? Grif! Grif? Grif! Come on!

Sarge: Where are you? Grif, I need you!

Grif: In here, in the base!

Sarge: I can't hear you! Get out here!

Sarge runs towards the base while Grif is exiting it.

Grif: Simmons? If you wanted Simmons, then why didn't you yell like a lunatic for Simmons?

Sarge: Damn it, Grif! I entrusted you with one duty! And that's to know exactly where Simmons is at all times so I can find him! Simmons watches Donut, Donut watches me.

Grif: Yeah, who watches me?

Sarge: Nobody. You move less than Donut does. Now where's Simmons?

Grif: I don't know, he's downstairs in your hologram simulatron or whatever the hell you call it.

Sarge: I'm gonna recommend you for a big shiny medal!

Grif: Okay, you're being sarcastic right now, aren’t you?

Grif: Who knows? Probably? Unless—wait, are you being sarcastic right now by asking that?

Sarge: Hm. Maybe we should drop this conversation.

Sarge: (starts heading into the base) What's Simmons doing downstairs?

Grif: Sorry! Not in my job description!

Cuts to inside the simulation room, where Simmons is seen working on the jeep.

Sarge: Simmons! There you are! I’ve been looking everywhere for you!

Simmons: Really? Sorry, sir. I was just down here working on the jeep prototype. I know you really want to see it built, and we need to work on a few bugs in the design.

Simmons: Yeah, you know, like the fact it stalls every time we fire the magnetic cannon, because you based it on an EMP.

Simmons: Kind of a critical flaw, if you don't mind me saying.

Sarge: Oh, I don't mind you saying! Feedback is important.

Simmons: It's just that sometimes I feel bad criticizing your work... you know, because you're in charge and all.

Sarge: Simmons, there's no reason to feel that way! You're a valuable member of the team! I always find your feedback to be both insightful, and appropriate.

Sarge: I know I can be rough sometimes, but that's only because it's hard being the leader! You know, dealing with those dirty Blues and that lousy Grif character all the time!

Simmons: He is lazy, sir.

Sarge: I don't mean to complain, but sometimes... I just... need a friend... Simmons, we’ve been working together a long time. I hope I can call you a friend. And that you can call me... the same.

Simmons: Gosh, sir, I don't know what to say! If it's okay with you, I would really like it if I could just call you “dad.”

The real Sarge suddenly appears at the top level of the simulation room.

Sarge: Simmons, are you down here?

Sarge: What the hell are you doing?

Simmons: Nothing! I was just working on your jeep design and—

Sarge: What? Stay away from my jeep! It's perfect! You'll just mess it up!

Sarge: And who are you talking to?

Sarge: Well, get upstairs on the pronto! We need to have a meeting! And I need someone to agree with me.

Simmons: Do you want to brief me on the details first, so I know what I'll be agreeing to?

Sarge: Oh yeah, I'll get riiiight on that. Send you a memo.

Simmons: Really? Because I’ve been working on the template and I think it's ready to—

Sarge: No! Of course not! Why the hell would I do that? What, did you get exposed to radiation or something down here? (leaves room) That boy's gone crazy...

Simmons: I like my digital life so much more than my stupid real life.

Cuts to outside the entrance of the Red Base. Grif and Sarge are watching Simmons approach.

Sarge: Finally! Maybe now we can get started!

Simmons: Nothing. Leave me alone.

Sarge: Men, as you know, the Blues have been erased from Command records, for some unknown reason.

Simmons: Unknown? Sir, we’re the ones that did it!

Sarge: You can't prove that.

Simmons: I think we can—

Grif: Prove it to who?

Simmons: —because we’re the ones that did it.

Simmons: Not allegedly. You told me to do it, and I did it.

Sarge: Reportedly! Let's not go accusing people and inviting a lawsuit until we know the facts!

Grif: Who's gonna sue us? Us? We’re gonna—wait, we’re gonna sue ourselves?

Sarge: I'm going to defer this conversation to my legal team.

Grif: So, that means the staff meeting is over?

Sarge: We have too much to discuss! Isn't that right, Simmons?

Simmons: (sighs) Absolutely, sir. No one has ever been more right than you.

Grif: Wow, someone's phoning it in.

Sarge: If the Blues aren’t in Command's database, that means even if we destroy them in a resounding victory, it still won't count as a win! It's like we didn't even beat anybody!

Grif: Hey, that's right! I never thought about that, sir!

Sarge: So that means, we can't kill the Blues.

Grif: Exactly. Because if we defeated them, it won't even count. And that's the best part about winning a war: getting the points.

Simmons: (without enthusiasm) No, why would we try to win, it's only what we’re supposed to do.

Sarge: We need to find a way to get them back into the database first.

Grif: So, your plan is to hold off our attack until our superior officers take notice of one of the teams in this canyon? And, notice them well enough to actually go out of their way and add them back into the database? Or, do anything at all in any way to formally recognize us in an official capacity?

Sarge: You got it.

Grif: This is probably the single greatest plan I’ve ever heard in my entire life.

Simmons: You would think that, kiss-ass.

Sarge: So! Our first order of business should be to fortify our own team! Get ready for the big battle! Let's get Donut back on his feet.

They all turn to where Donut previously was, but he is gone.

Simmons: How would I know?

Sarge: Keeping track of Donut is one of yer duties!

Cuts to Caboose inside the Blue Base. He is still talking to the Epsilon unit. The camera slowly zooms out from Caboose as he is speaking.

Caboose: And then there was the time we turned all of our armor black, because Tex was captured. You remember her. I told you all about her. It was a crazy adventure. Then there was another time when she helped us break into O’Malley's fortress.

The camera slowly pans to the right, revealing Donut standing right behind Caboose.

Caboose: Didn't I tell you that one already? (suddenly glances up) Hey! Do you ever get the feeling that you're being watched by someone? (after a brief silence) Donut, I'm asking you a question. 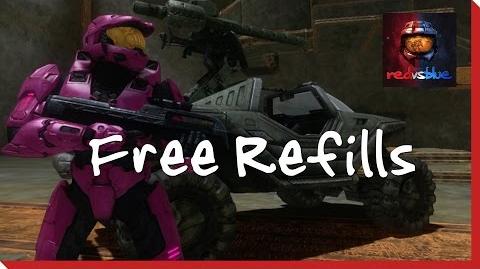 Retrieved from "https://rvb.fandom.com/wiki/Free_Refills?oldid=135706"
Community content is available under CC-BY-SA unless otherwise noted.