In the present, Washington and Carolina engage several soldiers, until Grif appears in a Warthog and eliminates the attacking soldiers, with Tucker and Simmons arriving soon after, also in a Warthog. As the team regroups outside, Epsilon asks everyone why they decided to rescue him. Sarge and Caboose explain that Carolina wants to find the Director and since Epsilon has all of his memories, he may know where he is. Epsilon, skeptical about the plan, states that although he has the Director's memories, he can't necessarily remember them himself. Carolina then gives orders to the Reds and Blues, not understanding the fact that they are completely clueless as to what she's saying. Washington summarizes them as a result. Getting frustrated, Carolina orders the team to leave.

Pan towards the Insurrection spacecraft. Cut to the interior of the spacecraft where two Insurrectionists are seen firing their weapons.

Insurrectionist #1: Intruder, get him!!

C.T. lowers her rifle and tosses it to the Leader.  The Leader catches it.

Insurrectionist Leader: I was worried about you.  Didn't think you be able to get away.

C.T: You don't know the half of it.  They stepped up production.  Here.

C.T. hands a datapad to the Leader.

C.T.: The ship was captured by the enemy.  I'm surprised there's anything left in the data banks.

Insurrectionist Leader: Ha, not everybody follows protocol you should know that better than anyone.

C.T.: You really think they found another artifact?  How could nobody have discovered that when they were processing the wreckage?

Insurrectionist Leader: They didn't know where to look, and they didn't have what you have.

Cut to three soldiers engaging Carolina.  Washington runs out of the base and assists her.

Carolina: Wash, take that right side.

Wash shoots and kills one of the soldiers.

Washington: Where's everyone else?!

Carolina: Working on an extraction plan.  They should be here right about-

Grif suddenly appears in a Warthog and runs over the remaining soldiers.

Grif stops the Warthog in front of Carolina and Washington.  Sarge and Caboose run out of the base to join them.

Sarge: Damn you Private Grif! You took out those two soldiers before I could administer my legal brand of red justice.  Now where's Simmons?

Grif: I don't know.  He found another Warthog and he was right behind me.

Another Warthog, containing Simmons and Tucker, drives out in front of the base, parking next to Grif. Simmons activates the emergency brake after doing so.

Simmons: Hey, I don't need all that flash.  Some of us have respect for the fundamentals.

Grif: Hey, what did I tell you before?  You know you're not allowed to use words that use the term "fun" in them.

Tucker: I'm riding with you next time.  He actually stopped at the train tracks.

Tucker: We were under fire!

Sarge: Simmons, only you could manage to make a high-speed chase boring.

Grif: What is that song?

Simmons turns it off.

Simmons: Uh, it's a Bolivian Orchestral Mash-Up.  Obviously, you haven't heard of them yet.

Grif: Thank Goodness for that.

Epsilon: I still don't understand.  Why did you guys rescue me?

Caboose: Yeah, actually it's Miss Fussy Britches.  She gets really mad when you say it wrong.

Sarge: She wanted to get you out of that memory whatsit.  Something about you being a geneticfide and mental imprint of muculeen of that Professor What's His Puss.

Epsilon: Can somebody translate that?  I don't speak Huckleberry.

Caboose: Yeah, the mean lady wants to find the Director and since you have all of his memories, you might know where he went.

Epsilon: Wow, that actually seemed too correct for you, Caboose.  There must have been some part of that you didn't underst-

Caboose: -and when she finds him, we're going to throw him a very big surprise party.

Epsilon: Ah, there we go.

Sarge: Sure, as long as surprise party means shooting him in the face and then walking away in slow motion.  Hehe.

Epsilon: Well, I- you know, I hate to break it to you, but I don't know how much help I'm going to be.  I mean, I may have the Director's memories, but that doesn't mean I...remember them.

Caboose: Yeah, I have the same problem.  I barely remember any of my own memeories, (turns to Sarge) and none of anyone else's.

Sarge: (to Epsilon) Well you better start remembering Blue.  I had to watch Grif nearly die three times today.  It's like fate was laughing at me.  (yells at the sky) Why don't you just take him already!

Epsilon: I gotta say, I'm pretty surprised to see you taking orders from a Blue...Sarge.

Epsilon: What?  You didn't want to come?

Sarge: Let's just say you seem to know a lot of women with quick tempers.  You got a fetish or something?

Epsilon: I guess you could- Say yeah, apparently.

Sarge: ...Wanna talk about it?

Caboose: Wanna talk about it with-

Carolina: Okay, everyone load up.  NAV points are in your HUDs.  Alternate NAVs uploaded to your secondary objectives.  Sync.

Everyone stares at Carolina in silence.

Washington: Oh, uh right!  (to everyone) Everyone, just say "sync" whenever she says that.

Carolina: You guys not used to getting orders?

Grif: Oh, were used to getting them alright.  We're just not used to doing much with them.

Simmons: Oh!  Okay, yeah!  That's usually step one in most of our plans.  Sync!

Carolina leaves.  Cut to the past, outside the Insurrectionist spacecraft's main hangar.  Inside the hangar, Carolina and South Dakota are seen talking to one another. Carolina tosses her Gravity Hammer away. In the background, York screams as he hits a floating Warthog and spirals away.

Carolina: What do you mean the leader's not here?

South Dakota: Exactly what I said.  His last check in is upstairs in the main deck, but his callsign just appeared in their internal frequencies.  He's broadcasting from out in Bone Valley.

South Dakota: Gee, you're starting to sound like a broken record.

Carolina: Fine.  Change of plans everyone.  We're heading into the junkyard.

Carolina, South, North, and Washington all file up in a line and prepare to leave.

Carolina: (quietly to herself) This is beginning to feel more and more like a setup.

Suddenly, York crash lands inside the main hangar with a jetpack on his back.  The Freelancers turn their heads towards York, in response to his sudden arrival.  York drops his legs and sits up.

York: Ugh!  You would not believe the time I had getting back.  It's nuts out there!

Carolina and South Dakota take off on their jetpacks and exit the hangar.

York: What?  No welcome back?

North Dakota walks towards York and pats him on the back.

North takes off on his jetpack and exits the hangar.

York: Where are they off to in such a hurry?

Washington walks towards York and helps him up.

Washington: Found the leader.  He's hiding out in Bone Valley.

York: We're going all the way over there? After what happened to Georgia?

Washington: Would someone please tell me what happened to Georgia?!

York: Dude, you do not want to know.

York takes off on his jetpack and exits the hangar, leaving Washington alone.  As York flies away, the camera slowly pans away from the main hangar, where Washington is seen standing inside by himself.

Washington: (to empty air) I really do though!

Cut to another area of the spacecraft, inside the the Insurrectionist Leaders's room.

Insurrectionist Leader: Time to get out of here.

The Leader and his two other Insurrectionist soldiers begin to leave.  As the two soldiers continue to walk away, the Leader stops, turns around, and faces C.T.  He walks up to her and touches her shoulder.

Insurrectionist Leader: You too.

Insurrectionist Leader: If they weren't on to you before, they definitely will be now.  Come with us Connie.  I'm not gonna lose you over this.

Insurrectionist: (over radio) All forces we are go!  I repeat, we are go!

C.T. walks away and leaves with the Insurrectionists.  The Leader follows her out. 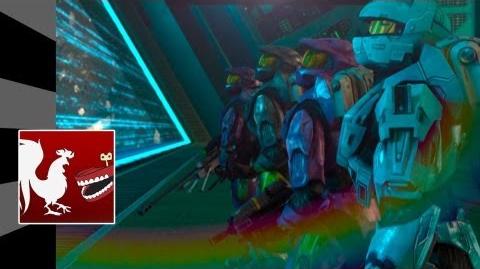 Retrieved from "https://rvb.fandom.com/wiki/Follow_the_Leader?oldid=146733"
Community content is available under CC-BY-SA unless otherwise noted.